How Much Will the Rise in Commodity Prices Reduce
Discretionary Income? -Liberty Street Economics

« Have Consumers Been Deleveraging? | Main | Historical Echoes: A Timeline of American Finance—1861-1938 »

How Much Will the Rise in Commodity Prices Reduce
Discretionary Income?

“… the surge in international commodity prices. If that persists it could hurt Americans’ disposable income, especially as it is reflected in higher gas and energy prices.”

I concentrate on the two areas of personal consumption expenditures (PCE) that are most directly exposed to commodity prices: food purchased for off-premises consumption (“food”) and energy. There are then two important components in measuring the discretionary income effect: the share of these goods in total PCE and the relative prices of these goods. 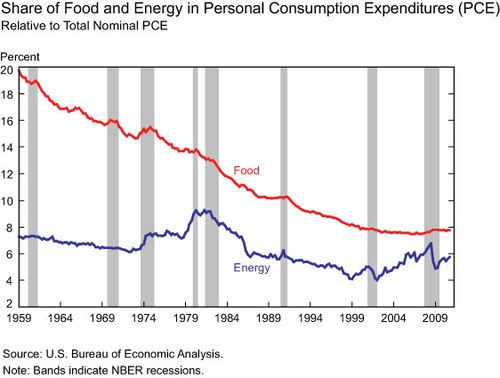 As shown in the next chart, real consumer food prices (based on the PCE deflator) over recent years have remained below the levels seen prior to the mid-1980s, even after the food commodity price spike in 2008. In contrast, real energy prices have displayed considerably greater volatility (note that the energy scale is much wider), and have been above the levels seen after the oil price shocks of the 1970s, especially after the price spike in 2008. 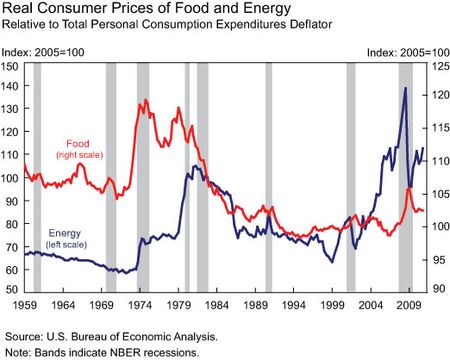 To use these two components to measure the discretionary income effects, I apply a method discussed in a recent paper by Edelstein and Kilian (restricted) to construct “purchasing power changes” associated with energy and food price changes. The intuition behind the method is measuring the additional income needed to maintain a previous period’s share of food and energy expenditures given the change in real prices for those goods in the current period. Because this method explicitly does not allow for substitution, we can think of these calculations as providing an upper bound for the discretionary income effect.

However, even in the case of energy, these purchasing power changes generally appear to be small relative to tax changes: for example, the two percentage point reduction in the payroll tax that is part of the recently enacted fiscal agreement is estimated to raise disposable income for 2011 by about $120 billion. 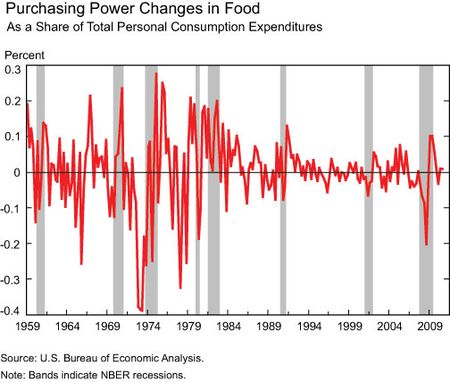 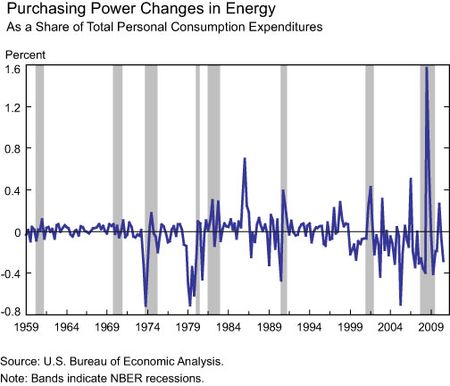 To assess the effects of commodity prices on total consumption, I estimate a small, three-variable vector autoregression (VAR) model consisting of the percentage change in real oil prices, purchasing power changes for energy, and the percentage change in real PCE. (A similar VAR is estimated for food.) The estimated instantaneous elasticity of oil prices on real PCE—that is, the percentage response of real PCE to a 1 percent increase in oil prices—from the model is near zero, and the longer term elasticity is near -0.05 (for food, the longer term elasticity is near -0.1). In each case, the variance decompositions, which calculate the portion of the model’s forecast variance attributable to “shocks” of each variable, indicate that commodity prices and purchasing power changes have a relatively modest role in PCE fluctuations (10 to 15 percent at horizons of one year or more).

Overall, it appears that the discretionary income effects of commodity price changes generally have been a fairly small factor in aggregate consumption fluctuations. However, there are two issues that are beyond the scope of my analysis.  First, as discussed in a recent Economic Trends article by the Cleveland Fed, many households, especially low-income ones, spend a larger share of income and expenditures on food and energy than indicated in the macroeconomic data. Consequently, they are more susceptible to price increases in these goods. I plan to discuss this issue further in a future post.

Second, the discussion in this post assumes that the effects are linear. As Jim Hamilton has documented in many pieces (a recent example is his 2009 paper), oil prices appear to have a nonlinear effect on GDP—in particular, oil price increases that raise prices above recent peaks are associated with GDP declines, but oil price decreases and small increases appear to have little effect. If such effects are also true for consumption, then large commodity price increases potentially could have a larger effect on consumption than suggested here. Examining the possible nonlinear effects on consumption will have to be the subject of another future post.

I want to thank the readers for their comments. Regarding the question in one comment about food and energy expenditures as a percentage of GDP less gross savings, it turns out those percentages display similar patterns over time as food and energy expenditures as a percentage of PCE, so that probably would not help out in accounting for the effects of a skewed income distribution. More generally, the comments reflect some limitations of my analysis using aggregate data. Because food and energy shares can differ across households, in particular across the income distribution, the overall impact of commodity prices on discretionary income and consumption potentially could differ from the conclusions using aggregate data only. As mentioned in my original post, I am working on some analysis that addresses the issues of differential expenditure shares of food and energy across the income distribution that I plan to discuss in a future post.

There are a couple of additional issues that I failed to mention in the original post. First, the analysis uses quarterly averages of commodity prices, but some additional analysis using monthly data leads to similar conclusions. Second, the analysis depends upon average historical patterns holding in the current environment of large rapid increases in commodity prices. The possibility that this may not be true represents a notable risk to any projection based on my analysis.

Personally, food prices in my area of the country (Arizona) have increased substantially (10% or more in the past year). My personal discretionary income has remained static. This means that I am, personnally, less well off today then last year at this time. I sense that this situation is typical of most wage earners and fixed income people in Arizona.

I'm struggling with the math here. If the income distribution is very skewed, then the mean spending on food and energy won't tell us much about the effect of changes in those relative prices. Those price changes will have practically zero effect on the consumers whose income makes up the bulk of the national income accounts, but a large effect on the bulk of consumers. Shouldn't we be looking at food and energy spending as a percentage of (GDP less gross savings) as a means of adjusting for the income skew?