« Prospects for the U.S. Labor Market | Main | The Bathtub Model of Unemployment: The Importance of Labor Market Flow Dynamics »

Okun’s Law
Okun’s law is often illustrated by showing the correlation between changes in the unemployment rate and GDP growth. The underlying idea is that there is a predictable relationship between the changes in hours and changes in the unemployment rate that then leads to a predictable relationship between GDP growth and unemployment. In Arthur Okun’s original 1962 study, he reported the following estimate using data from 1947:Q2 to 1960:Q4 (we have converted it into an annual form for the benefit of the reader):

The coefficient multiplying the difference between output growth and the constant—the latter can be interpreted as the potential growth rate—is known as Okun’s coefficient. This version of Okun’s law states that if growth is about 7.3 percent over a year, then unemployment will decline by 1 percentage point.

Although Okun’s law is simple, a number of subtle assumptions about the labor market underlie it. To illustrate, we go back to basics and derive some simple relationships. Recall that GDP growth can be decomposed into the sum of growth in output per hour (labor productivity) and the growth in hours (labor input).

Using the convention of log changes to approximate growth rates, we can then split hours growth as follows:

Further, recall from yesterday’s post that we can express the log change in the employment-to-population ratio as

Using these expressions for the growth in hours and the log change in the employment-to-population ratio in the decomposition of GDP growth into labor productivity growth and hours growth, splitting each of the series into a trend (long-run) component and a cyclical component, and noting that potential growth is the sum of trend growth in productivity and hours, we derive the following relationship between the change in the unemployment rate and output growth relative to potential growth:

Assuming that the cyclical changes in productivity growth, hours per employee, and labor force participation have stable relationships to output growth and potential growth, we then obtain the Okun’s law relationship:

At the time
of the original Okun study, these assumptions about the cyclical behavior of productivity growth, hours, and labor force participation seemed reasonable given the composition of the U.S. labor market: More than two-thirds of the labor force was male, most of these men worked full-time, and the highest level of educational attainment was high school for more than half of the labor force.

Given these changes in the labor market, we are not surprised that the relationship found by Okun has subsequently proved to be unstable, especially in recent years. Still, considering that Okun’s law underlies many unemployment rate forecasts and that the evolution of unemployment from this point in the expansion onward is an important policy issue, we next examine this relationship in previous long expansions.

Unemployment Declines in Long Expansions
Here, instead of showing time variation of Okun’s coefficient using regression techniques (as in a recent blog post by Duy and an earlier paper by Knotek), we compare the decline in the unemployment rate between the start of the third year of a long expansion and the end of the fifth year to the decline predicted by Okun’s law, with the latter based on the cumulative difference between GDP growth and potential growth over this period. (The figure below illustrates this timing for each of the long expansions.) We look at developments starting after the first two years of an expansion both to match where we are in the current expansion and to motivate some of our analysis of labor market flows in the next blog post. To construct potential growth rates, we use the historical potential output series produced by the Congressional Budget Office (CBO), which enables us to abstract from changes in potential growth. We can then examine the size of deviations from Okun’s law in terms of actual unemployment outcomes.

The results of this exercise for the four long postwar expansions—those that have lasted more than six years—are shown in the table below, where we present the range of unemployment rate predictions assuming that Okun’s coefficient varies from 0.3 (Okun’s initial estimate) to 0.5 (a value currently used by many forecasters). (Note that we also obtained similar results using different timing conventions.) 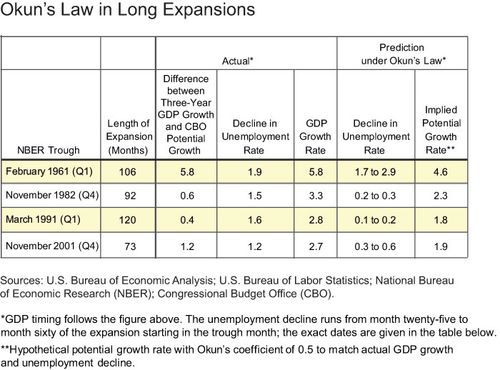 For the 1960s expansion, the actual decline in the unemployment rate is within the range of predictions using Okun’s law. As noted above, the structure of the labor market in the 1960s more closely fits the underlying stability and homogeneity of the labor force required for Okun’s law to hold. However, for the three most recent expansions, the decline in the unemployment rate is substantially greater than that predicted by Okun’s law. Further, this difference is particularly striking in the expansions of the 1990s and 2000s that started with “jobless recoveries.” It seems that Okun’s law has not been a reliable indicator of unemployment declines over long periods of recent expansions.

Of course, one way to reconcile the discrepancy would be for potential growth to have been lower than that estimated by the CBO, which would widen the gap between actual and potential growth.  In the last column
of the table above, we show the hypothetical potential growth rate using Okun’s law (assuming an Okun’s coefficient of 0.5) needed to match the actual GDP growth and unemployment rate decline in each of the recent long expansions. Especially in the case of the 1990s, when information technology was pushing up trend productivity (for example, see Jorgenson, Ho, and Stiroh), these implied potential growth rates seem implausible. 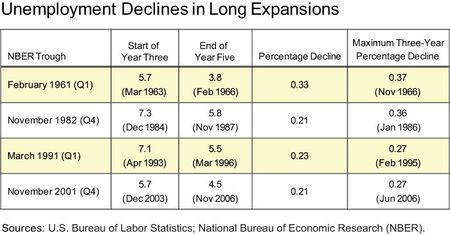 Lastly, suppose that actual GDP growth is 2 percentage points above potential GDP growth and that the Okun’s coefficient is 0.5. Okun’s law would predict a fall in the unemployment rate of 1 percentage point independent of its level (that is, it would predict a fall from 10 percent to 9 percent as well as from 4 percent to 3 percent). Such an implication seems inconsistent with labor market flows: Given the typical pattern of flows into and out of unemployment, a decline from 10 percent to 9 percent is much easier to achieve than a decline from 4 percent to 3 percent. But similar percentage declines at parallel points of business cycles, as shown in the second table, are more consistent with labor market flows.

This post has shown that Okun’s law has been regularly “violated” in recent long expansions. As an alternative to a mechanical GDP-unemployment relationship, the next post in this series will examine the flows into and out of unemployment as a tool for understanding movements in the unemployment rate.

*Ging Cee Ng is an associate economist in the Research and Statistics Group.