A Boost in Your Paycheck: How Are U.S. Workers Using the Payroll Tax Cut? -Liberty Street Economics 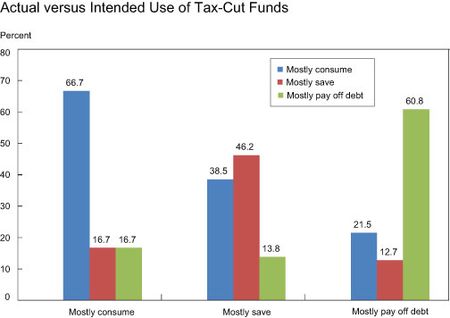 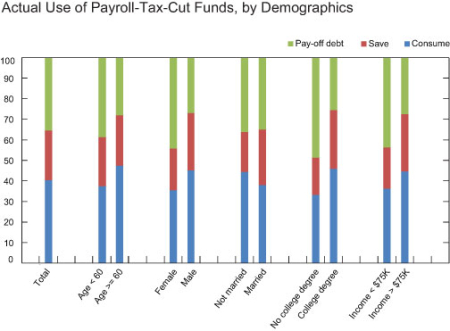 Three of our findings are noteworthy. One, our larger MPC estimates highlight the importance of the design of tax holidays (rebates or cuts) in determining the response of spending to policies. Second, our finding—that people who perceive tax cuts to be more permanent plan to spend more of their funds—has fiscal policy implications as to whether such tax cuts are implemented as long-term extensions or sequential short-term extensions. Third, we find that people spend a large portion of their tax-cut funds to pay off debts—this may be good news considering the large debt issues leading up to and during the financial crisis—and may also suggest that our estimated MPC is an underestimate because by facilitating deleveraging, it can indirectly lead to higher future spending through a reduction in future interest payments.

Basit Zafar is an economist in the Microeconomic Studies Function of the New York Fed's Research and Statistics Group.

Grant Graziani is a research associate in the Regional Analysis Function of the New York Fed's Research and Statistics Group.

Wilbert van der Klaauw is a vice president in the Microeconomic Studies Function of the New York Fed's Research and Statistics Group.

Posted by Blog Author at 07:00:00 AM in Fed Funds, Fiscal Policy, Household Finance