Foreign Borrowing in the Euro Area Periphery: The End Is Near -Liberty Street Economics

A country’s current account balance measures how much it lends to or borrows from the rest of the world. A country where imports run ahead of exports is also spending more than it produces and must borrow abroad to make up the difference. Countries in the euro area periphery borrowed heavily from abroad during the several years leading up to the ongoing sovereign debt and banking crisis. As a result, they faced wrenching adjustment pressures when foreign investors became unwilling to extend new credit, even with the lure of sharply higher interest rates. These adjustment pressures forced changes in the balance between exports and imports, and equivalently in the balance between income and spending, without any help from an exchange rate channel because of the shared euro currency. 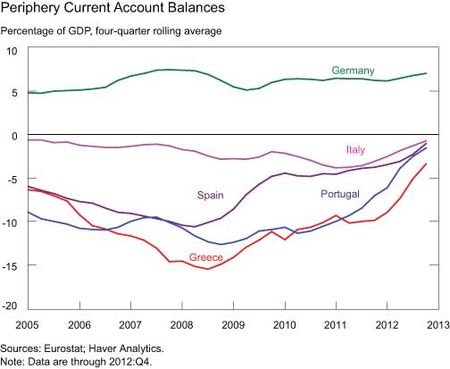 Exports and Imports
The loss in access to foreign credit meant that export revenues had to rise relative to import purchases. As seen in the table below, much of the recent adjustment in Italy, Spain, and Portugal has come from higher export revenues. From 2010 to 2012, nominal goods and services exports in these countries rose by 15 percent or more, roughly in line with Germany’s performance. Higher exports in these countries have helped support growth, softening ongoing economic downturns. Greece, in contrast, saw export sales rise only 8 percent over this two-year period; this increase provided only limited help easing the country’s severe downturn. 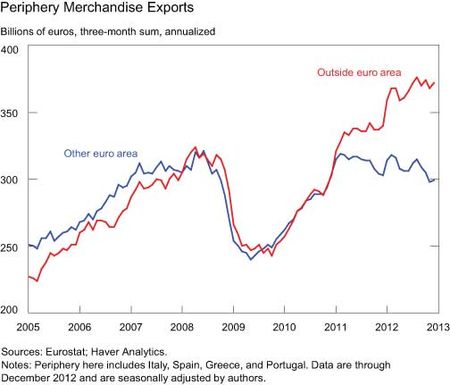 By this metric, Spain and Portugal have done well in recent years, with exports growing 6 to 8 percent faster than trading partners’ total imports from 2010 to 2012. (These figures are based on preliminary estimates from late 2012.) This matches up well with Germany’s performance of exports, which grew 5 percent faster than trading partners’ total imports. Italian exports, in contrast, just kept pace with imports in destination markets. Meanwhile, Greece lost substantial market share, with exports growing 10 percent more slowly than destination market imports did over the period.

Import weakness also contributed to the external adjustment in the periphery. This was particularly true in Greece and Portugal, where purchases of foreign goods and services dropped 11 percent and 4 percent, respectively, from 2010 to 2012. Italy’s imports rose modestly, while Spain’s rose 6 percent. In all cases, import growth fell far short of export growth, helping to reduce external borrowing.

Ongoing economic downturns have been the key driver of import weakness in the periphery. Indeed, import spending remains well below levels prevailing before the Great Recession; import spending in Germany, in contrast, has moved well above it pre-recession level. One concern is that periphery import spending might pick up quite strongly once economies recover, bringing a new round of large current account deficits. A more positive take is that the difficult adjustments have brought imports in line with exports; going forward, the two can grow together without the need for new borrowing.


Spending and Income
A current account deficit means that domestic spending is greater than domestic income. An alternative but equivalent measure of this gap is the difference between domestic investment and domestic saving. (Note that a country’s public and private spending goes either to consumption or investment, while income not spent on current consumption is by definition saved. Thus, the gap between spending and income is equal to investment spending minus saving. This same accounting logic means that a country’s fiscal deficit is the difference between government saving and investment spending.) The table below shows that much of the narrowing in periphery current account deficits over the past two years has come from lower investment spending, with declines equal to almost 2 percentage points of GDP to more than 4 percentage points. Higher saving also contributed to reduced current account deficits, with small increases in Italy and Spain and more substantial increases in Greece and Portugal.

The drop in investment spending, particularly outside the housing sector, could limit improvement in periphery competitiveness and growth prospects. As the next chart shows, this is especially the case since the recent drop in investment comes on the heels of an already large drop in 2008 and 2009—during the Great Recession but before the euro area crisis took hold. In contrast, investment spending in Germany has seen no pullback. Notably, economic recoveries are often led by investment spending. One risk for the periphery, then, is that stronger growth could see current account deficits widening as investment spending is again financed by external borrowing. On the positive side, stronger growth would also help boost public and private saving by limiting government budget deficits and raising corporate profits. 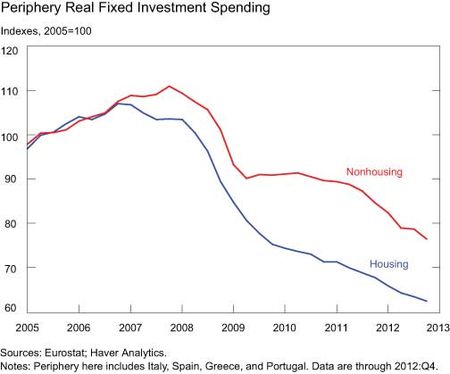 Conclusion
Periphery countries have suffered painful contractions weaning themselves from foreign borrowing. The hope now is that the restoration of external balance in these countries will set the stage for meaningful recoveries. The debt burden from past borrowing remains, however, and argues for caution about the periphery outlook. Much will depend on the behavior of external investors. A further pullback would force periphery countries to lower spending below incomes to generate current account surpluses to pay down (rather than merely service) accumulated external debts. This would suggest an even steeper drop in periphery consumption and living standards. Recent balance-of-payments data have been encouraging on that point, however, as private investors stopped pulling money out of periphery countries in the second half of 2012, apparently reassured by the European Central Bank’s Outright Monetary Transaction program that was announced last August.

Thomas Klitgaard is a vice president in the Bank’s Research and Statistics Group.
Posted by Blog Author at 07:00:00 AM in Balance of Payments, Current Account, Euro Area, Exchange Rates, Exports, International Economics

I believe it always comes down to Germany. Every other single EU country may "adjust" but unless Germany does as well the crisis will never be over. There are always two sides to an equation (and an acc. entity) and we can clearly see the Germans have not done their part during the adjustment process.They should spend more,save less,be tolerant for some inflation and realize that they will share the burden either way. Thank you very much for the article.