Consumer Confidence: A Useful Indicator of . . . the Labor Market?

Consumer confidence is closely monitored by policymakers and commentators because of the presumed insight it can offer into the outlook for consumer spending and thus the economy in general. Yet there’s another useful dimension to consumer confidence that’s often overlooked: its ability to signal incipient developments in the job market. In this post, we look at trends in a particular measure of consumer confidence—the Present Situation Index component of the Conference Board’s Consumer Confidence Index—over the past thirty-five years and show that they’re closely associated with movements in the unemployment rate and in payroll employment.

About the Index
Consumer confidence is a widely followed economic indicator, largely based on the idea that the consumer’s mood—driven by what Keynes referred to as “animal spirits”—can independently affect the degree to which he or she is prone to spend. Less well known is the linkage between consumer confidence and labor market conditions. This is an important distinction, because most formal analyses evaluating consumer confidence as an economic indicator examine its predictive content for consumer spending—after controlling for measured changes in the labor market—rather than study its comovement with employment measures.


The Conference Board measures consumer confidence based on responses to five questions. Three of the questions focus on expected changes—in business conditions, job availability, and the respondent’s household income. The responses make up the Expectations Component Index. The other two questions focus on the level of present conditions—specifically, present business conditions and present job availability. Responses to these form the basis of the Present Situation Index. The Conference Board’s Consumer Confidence Index is a composite of the two indexes. Between the overall index and its two components, our analysis suggests that the Present Situation Index is the more useful economic indicator to monitor employment.


Confidence Closely Tracks the Job Market
The chart below plots the Present Situation Index against the unemployment rate, whose scale is inverted so that high levels represent strong labor market conditions (low unemployment) and vice versa. One readily apparent feature is that the two series move together very closely throughout the period and, most notably, during all five of the recessions since 1977. It’s hard to tell from inspecting the chart, but the highest correlation (0.89) occurs at a two-month lead; that is, the Present Situation Index is even more strongly correlated with the unemployment rate two months into the future than it is with the concurrent rate. 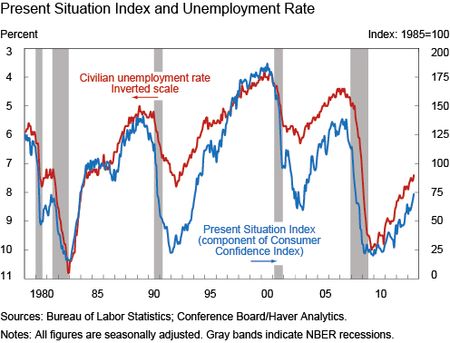 The next chart looks at the relationship between changes in this index and payroll job growth—both over twelve-month intervals. This measure of employment is based on a different survey than the survey for the unemployment rate, but payroll employment is typically growing when unemployment is declining and vice versa. Once again, it’s very apparent that the two measures move closely together, and again formal analysis reveals that the Present Situation Index tends to foreshadow movements in employment by a couple of months. In particular, twelve-month changes in the index are most highly correlated with twelve-month job growth four months into the future—the correlation is 0.83. 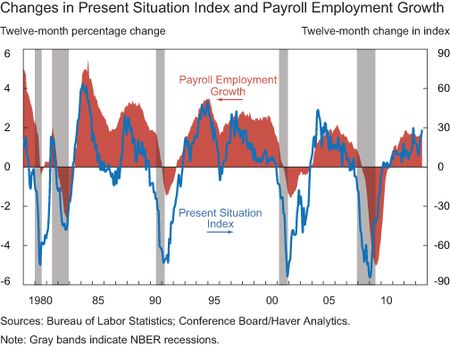 While the charts look impressive enough as is, the consumer confidence numbers shown here are typically released one-and-a-half weeks before the employment numbers for the same month. Moreover, the confidence numbers don’t get revised, except for once in the subsequent month. The employment data, in contrast, undergo annual benchmark revisions, which can alter the reported path of job growth that can go as far back as a year-and-a-half. In particular, the most pronounced revisions to employment tend to come at or near cyclical turning points, and they tend to move the data in the direction of cycle—that is, the final, revised data (shown in the chart) tend to be somewhat clearer in signaling turning points than the initially reported data (see this Atlanta Fed article for further discussion). Thus, there’s an additional dimension by which the Present Situation Index can be informative about labor market conditions in real time. The capability of this confidence measure to predict revisions to payroll employment is an interesting issue for further research.


OK, but Can It Predict Turning Points?
Looking more closely at the chart, one can also observe that major turns in the Conference Board’s Present Situation Index tend to precede corresponding turns in the unemployment rate—particularly at business cycle peaks (that is, going into recessions). Major upturns in the index also tend to foreshadow cyclical peaks in the unemployment rate, which often occur well after the end of a recession. Another useful feature of the index that can be gleaned from the charts is its ability to signal sustained downturns in payroll employment. Whenever the year-over-year change in this index has turned negative by more than 15 points, the economy has entered into a recession. The only time it was a bit late in doing so was going into the 1982 recession, which is often considered the second part of a “double-dip” after the 1980 recession. But in all four of the other post-1980 recessions, this signal turned negative just before the recession began. In terms of signaling an incipient cyclical upturn in employment, the index has also performed well. While its signal wasn’t in proximity to the end of the past few recessions as determined by the National Bureau of Economic Research’s recession dating committee, this is likely because the early stages of the subsequent recoveries were “jobless”—that is, each of the last three recessions has been followed by a delayed employment recovery. If one focuses on the respective upturns in employment, then the index has performed quite well in all five cycles.


Has Confidence Given Any False Signals?
As a final exercise, we focus on a few episodes in which the Present Situation Index deviated from its usual relationship with the job market. For instance, why did the index get almost as low during the (relatively mild) 1990 recession as it did during the dramatic 2008 recession? Therein lies one shortcoming of this measure: It’s based on diffusion indexes, measuring whether a given respondent thinks things are bad, and not how bad they are. Thus, once the index gets to an exceptionally low level (near zero), it literally can’t go much lower. There have been minor, seemingly aberrant moves in the index. For instance, just as the economy was recovering from the 2001 recession, the index slumped to a new low in mid-2003, when the United States first invaded Iraq; while there wasn’t a renewed recession at that time, there was indeed a further, brief slump in the job market. But there’ve been several significant events that many commentators feared would lead to a recession but didn’t—the 1987 stock market crash, the 1994 bond market rout, the 1997 Asian crisis, and the 1998 Russian debt crisis. In each of these instances, consumer confidence held up well and proved to be a helpful and accurate economic indicator.


All of this, of course, begs the question: Why would the general public be able to give a slightly earlier read on the job market than the employment data do? One likely reason is that many people (survey respondents) are in the labor force, and almost everyone has close friends and relatives that work. So it stands to reason that most would be attuned to the general tone of the job market—at least in their region or neighborhood. For instance, people may well be aware, before layoffs actually begin, that a company’s business is slumping or that budgets are tight. Conversely, people are likely to be aware of a flurry of new job openings or a company’s need to increase staff before those new jobs actually get filled and are measured as new employment in the Bureau of Labor Statistics’ labor market report. If our readers have additional insights into the linkage between consumer confidence and the job market, we’d love to hear about them.

Robert W. Rich is an assistant vice president in the Group.


Joshua Abel is a former senior research analyst in the Group.
Posted by Blog Author at 07:00:00 AM in Labor Economics, Macroecon

Thank you for your comment and questions. It seems that much of the value in the Present Situation Index’s performance as a labor market indicator comes, not surprisingly, from the component question on present job availability. In effect, the survey asks people to assess the present availability of jobs. We are not aware of other survey measures (that have a long time series) that are quite like that. Michigan’s survey does have a forward-looking question on unemployment – but that’s quite different, asking people about what they expect (much uncertainty) as opposed to how they see things now. Moreover, responses to that question are not factored into their headline index, nor does that headline index incorporate any questions specifically about the labor market or job availability.

Excellent article and analysis. In addition to the Conference Board, itself, what would be other good sources for the Present Situation Index data? What about the The University of Michigan Consumer Sentiment Index? Might components of that index give similar correlations?