On the Design of Monetary and Macroprudential Policies -Liberty Street Economics

On the Design of Monetary and Macroprudential Policies

The financial crisis, recession, and slow recovery have emphasized the interactions between financial markets and the real economy. These developments have also motivated macroeconomists, central bankers, and financial regulators to think of new policy instruments that could help limit “systemic” or “systemwide” financial risks, as the Bank for International Settlements and the Financial Stability Board describe them. But apart from finding the right tools, policymakers are also interested in understanding how such instruments should be set in conjunction with monetary policy. In this post, we discuss the issues that arise when deciding how to design institutions for monetary and macroprudential policymaking. It turns out that the answer to this question hinges on a key issue in monetary policy: the ability of a decisionmaker to make binding commitments regarding his or her future behavior.

In 2010, the International Monetary Fund (IMF) conducted a survey documenting countries’ regulatory arrangements and financial stability frameworks. According to the review, over half of the countries in the sample had their central bank serving as bank supervisor, as the table below shows. Even accounting for the fact that in some countries the national central bank wasn’t responsible for monetary policy (member countries of the Euro area are subject to European Central Bank control of monetary policy), the majority of countries had their central bank in charge of both monetary and regulatory policy. Moreover, many countries with an independent regulatory agency (or agencies) actually had a coordinating committee whose role was to moderate the interaction between the central bank and regulators. 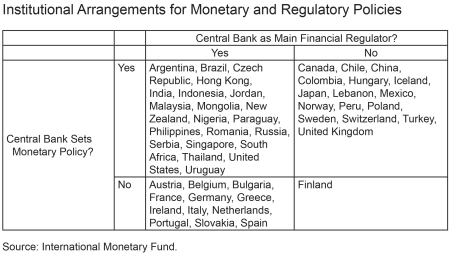 Overall, the evidence suggests that countries value an integrated approach to monetary and financial stability policies. Moreover, as noted by the IMF report, recent events appear to have led countries toward further integration, with some (such as Ireland) bringing prudential supervision to their central bank after the crisis and others (such as the United Kingdom) creating a financial stability committee within the central bank. But there are still countries, such as Switzerland and Iceland, in which there’s no such form of integration and no mediator or coordinating agency managing interactions between regulatory and monetary policy.

Economic theory points to costs as well as benefits of having independent authorities with established mandates. The classic debate on the institutional arrangements for the conduct of monetary and fiscal policy is a useful reference. Central bank independence and clear policy mandates have been advocated by many as a way of enhancing monetary policy credibility. Having an institution committed to maintaining price stability is a way of convincing the public that there will be no monetization of fiscal deficits. This approach helps manage inflation expectations, which in turn facilitates the task of stabilizing prices. Still, some potentially beneficial coordination between fiscal and monetary policy is lost in this setup. When formulating the appropriate macroprudential and monetary policy arrangement, similar issues have to be considered.

It turns out that answers to these questions depend on a central issue in monetary economics: commitment versus discretion. We first study the case in which policy authorities have full credibility concerning their ability to commit to future actions. Here, when policymakers announce a given course of action, the public fully believes it, and the policy is implemented as promised. In this case, we find that it’s clearly beneficial for monetary and macroprudential authorities to cooperate, or set their policy instruments jointly. The easiest way to achieve coordination, of course, is to have a single institution responsible for both policies.

Imagine that firms face a shock that allows them to lower prices; one can think of a shock to firms’ costs, such as a reduction in oil prices. At the same time that the shock creates downward pressure on inflation, it encourages firms to raise production and thus increase their demand for credit. Higher credit demand at constant collateral values may then lead to higher credit spreads. In these circumstances, an independent central bank seeking price stability would intervene by lowering interest rates. In parallel, an autonomous macroprudential authority striving for stable credit conditions would loosen regulatory rules in order to offset the rise in spreads.

But inefficiencies will arise if the macroprudential authority ignores the central bank’s policy response. In particular, if the authorities act independently, efforts of the central bank to lower interest rates and of regulators to lower spreads can lead to effective borrowing rates that are too low. Our analysis suggests that an integrated approach to monetary and macroprudential policy can avoid costly movements in inflation or unwarranted fluctuations in credit when policymakers have full credibility.

This line of argument shows that the monetary authority must take into account how the macroprudential authority reacts when setting its own policy tool. Of course, this position doesn’t mean that a single institution setting both instruments is necessary for attaining stable prices and credit spreads. In our framework, separate institutions may also achieve this outcome once they’ve fully incorporated the way in which the interactions between their instruments affect their stabilization objectives and set their tools accordingly.

We find that the institutional design matters when policymakers face trade-offs and can’t fully stabilize all the variables they care about. Such trade-offs occur when the classic Tinbergen rule is violated and the number of instruments available to the policymaker is smaller than the number of stabilization objectives.

Consider now a setting with such a missing-instrument problem. We show that welfare in our model depends on the volatility of inflation, the output gap, and credit spreads. And the shock we consider makes it impossible to stabilize all three variables with only two tools. The interesting case is one in which policymakers act according to discretion. When one authority sets both instruments, agents expect that some inflation will be generated in the future in order to stabilize the output gap and credit spreads. These expectations about future policy feed into the current decisions of forward-looking price setters. This dynamic creates inflation volatility that could be reduced only by a commitment to future behavior or by great volatility in the output gap. The former isn’t possible according to discretion and the latter is undesirable. Consequently, such an economy suffers from a discretionary bias that generates undesirable inflation volatility.

One can now see a potential benefit from having separate policymaking committees. If each committee has a narrow objective aimed at stabilizing a single variable, the aforementioned bias is avoided. If the policymaker’s credibility problems with the public are severe, a better outcome may be achieved if narrow mandates are delegated to independent authorities. In this case, an advantageous delegation structure would be to assign the mandate of price stability to central banks while distinct macroprudential authorities aim for stable effective borrowing costs. The former would keep inflation expectations firmly anchored and the latter would stabilize credit conditions.

So far, our findings suggest that having independent authorities with narrow mandates can lead to reasonable outcomes that aren’t too far from the ideal world in which fully credible policy institutions jointly set their instruments. But our analysis to this point ignores the fact that nominal interest rates can’t go below zero. Considering such a constraint might increase the need for cooperation between monetary and macroprudential policymaking. For example, if monetary policy can no longer change short-term interest rates, it might be beneficial to use macroprudential policy to improve credit availability. Some might suggest, in fact, that current policies in Europe are characterized by impairment in the transmission mechanism of monetary policy and by procyclical prudential regulation. Given how costly it may be to get stuck in a liquidity trap—as the Japanese experience suggests—more flexible and cooperative policies are likely to be of particular relevance in this instance.

Bianca De Paoli is a senior economist in the Federal Reserve Bank of New York’s Research and Statistics Group.
Posted by Blog Author at 07:00:00 AM in Euro Area, Macroecon, Monetary Policy, Regulation