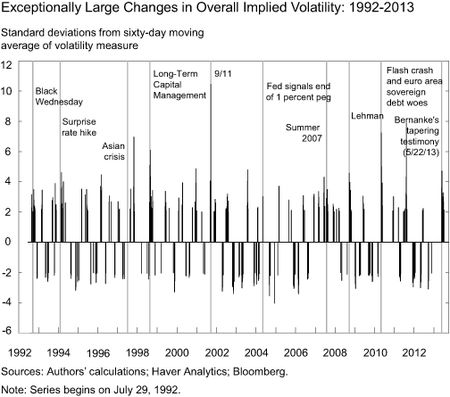 We use the features described above to estimate the impact of changes in risk aversion on asset prices using a statistical model estimated with data for United States, euro area, Japanese and emerging market equity markets, the U.S. and euro area bond markets, commodities, and two U.S. dollar-based currency variables (which we explain in more detail below). In this model, the current changes in the values of these assets are regressed on past changes in the values of all the assets, with the changes not explained being “residuals.” By looking at shifts in the correlations across the model’s residuals when there are large changes in overall implied volatility, we can identify the appropriate linear combination of these residuals in order to estimate risk-aversion shocks. We implement this using an approach similar to the one outlined in Mertens and Ravn (2013), in which we regress each of the residuals on a series that equals zero most of the time and becomes nonzero when there’s an exceptional change in overall implied volatility (equal to the values in the chart above). This then allows us to estimate risk-aversion shocks and to quantify within the model the impact of these shocks on asset prices.

The chart below plots the percentage change on a given day over the previous month for an index of forty-five dollar exchange rates. The blue line is actual data and the red line is the counterfactual version where we use our estimated model to strip out the effect of shocks to global risk aversion. The red line thus shows how the dollar’s value would have changed had there been no change in risk aversion. The gap between the red and blue lines indicates the degree to which the change in risk aversion affected the change in the overall value of the dollar. 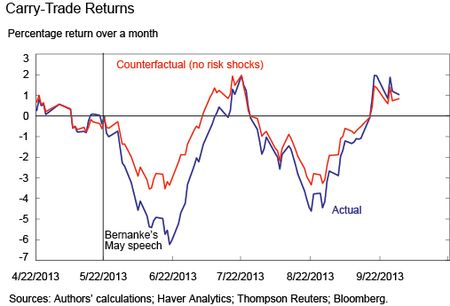 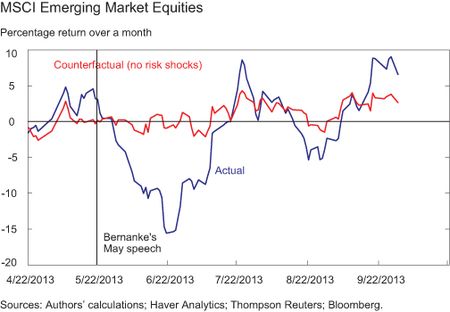 Very intersting article. It is interesting that the "hangover" effect from the Bernanke announcement was 3 months. That is longer than any effect from any "fixed monthly" report like employment, Consumer Confidence, etc. The Continuing Resolution was signed in March, 2013, right before your data kicks in, but it appears that effect is already adjusted by April. I would not have expected that.