This post is the first of two Liberty Street Economics posts on trade finance.

Banks facilitate international trade by providing financing and guarantees to importers and exporters. This is a big business for U.S. banks, but it has been difficult to estimate exactly how big due to a lack of data. In our recent New York Fed staff report, we shed some light on the size and structure of this market using information on banks’ trade finance claims available internally at the New York Fed. This post, the first of two, shows how trade finance has become more important in recent years, particularly with firms exporting to Asia. It also reveals that the size of the trade finance business varies widely across countries, with distance and shipping times from the United States being important factors. The second post will look at how trade finance is tied to country risk.

Banks make money by reducing the risk of international trade for exporters. This is a large and growing business, accounting on average for about 10 percent of the foreign activities of U.S. banks that participate in trade finance. U.S. banks provide trade finance for exports to practically all countries in the world, although only the largest banks offer the service for smaller and more remote destinations. The business is very concentrated, with the top five banks making up more than 90 percent of the market. Because the fixed costs in the trade finance business are high, smaller banks cover only the major U.S. trading partners or specialize in particular countries.

The chart below shows U.S. banks’ trade finance claims and U.S. exports of goods. Trade finance peaked in 1997-98 around the time of the Asian financial crisis, reaching almost $40 billion. Between 1999 and 2006, claims were quite stable at around $20 billion–$30 billion, even as exports trended higher. 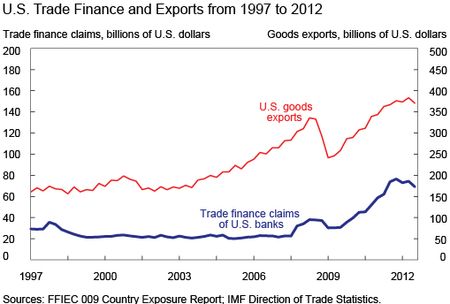 Trade finance then picked up at the beginning of the global financial crisis and continued to grow even as financial conditions worsened in 2008. Only as exports started to falter in the third quarter of 2008 did trade finance claims fall, although by less than exports. Trade finance then took off in mid-2009 and, while down from 2011 levels, is now at $75 billion or around 20 percent of U.S. exports.

The fact that trade finance peaked both during the Asian financial crisis and the global financial crisis suggests that firms had a high demand for trade guarantees then, even though prices of LCs were probably higher and banks were less willing to supply them.

The chart below shows that the recent growth after the Great Recession is largely driven by sales to Asia. U.S. exports to Asia have picked up since then, but the increases are too substantial for that to be the only reason. One consideration is that some of the banks involved in the euro-area sovereign debt crisis may have pulled back from Asia, a region that they have historically been very active in, allowing U.S. banks to gain their market shares. 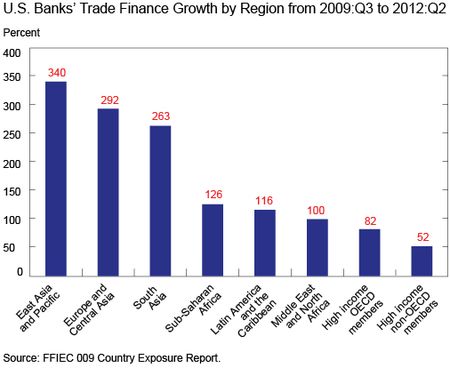 The next chart breaks down claims across countries, displaying the shares of the top twenty countries in trade finance claims over the first half of 2012. Currently, the largest trade finance markets are India, China, South Korea, and Brazil. Not surprisingly, these countries are also large trading partners of the United States. 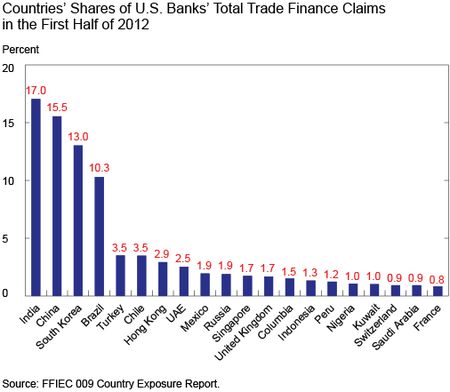 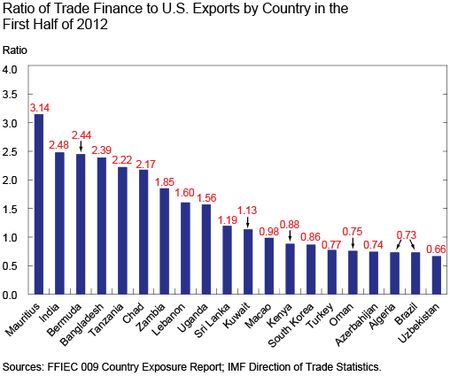 An analysis of the geographic trade finance data, detailed in our staff report, shows that trade finance intensity increases systematically with the importing country’s distance from the United States, as shown in the chart below. Additional analyses suggest that trade finance is also tied to the time it takes to import and to the share of goods delivered by ship. These three results imply that the longer it takes to deliver the goods, the longer the LCs remain on the books of the U.S. banks. The fees that banks charge for the LC are also higher because banks want to be compensated for the capital bound up in the transaction. Thus, longer shipping times mean higher costs for firms and larger profit opportunities for banks. 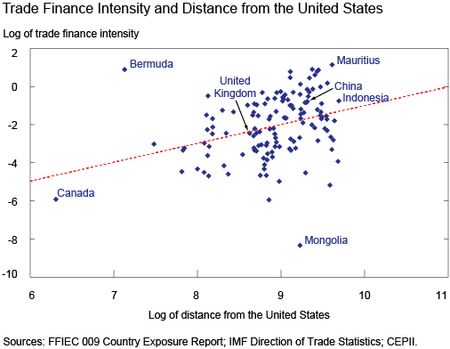 The size of the trade finance market increases not only with the time to trade but also with the riskiness of exports. Exporters that sell to countries with intermediate levels of country risk rely on guarantees the most. The next blog post explains why this is in detail.


Tim Schmidt-Eisenlohr is an assistant professor of economics at the University of Illinois at Urbana–Champaign.
Posted by Blog Author at 07:00:00 AM in Exports, Financial Institutions, International Economics