Why U.S. Exporters Use Letters of Credit -Liberty Street Economics

« The Trade Finance Business of U.S. Banks | Main | Just Released: What Kinds of Jobs Have Been Created during the Recovery? »

Why U.S. Exporters Use Letters of Credit

This post is the second of two Liberty Street Economics posts on trade finance.

Banks play a critical role in international trade by offering letters of credit (LCs) that substantially reduce the risk faced by exporters. As we discuss in our recent New York Fed staff report, the use of LCs by U.S. exporters has been on an upward trend in recent years. Two reasons for this may be that firms rely more heavily on LCs in financing export sales when interest rates are low and when uncertainty in global markets is high. Furthermore, the use of LCs differs across countries. Specifically, LCs largely support exports to countries with intermediate levels of risk. This is likely because the fees for exports to higher-risk countries eventually become too substantial.

The table below summarizes the trade-offs with these three arrangements.

So what factors push exporters and importers to use letters of credit?

To answer this question, we analyze internal Federal Reserve data on U.S. banks’ trade finance claims, discussed in our previous blog post and the staff report. The data include LCs issued by foreign operations of U.S. banks and LCs issued by a foreign bank operation and then guaranteed by a U.S. bank. From the data, we calculate the trade finance intensity as the ratio of U.S. banks’ trade finance claims divided by U.S. exports. The chart below plots this variable and the three-month Libor from 1997 to 2012. There’s a strong negative relationship, since LCs become cheaper relative to the two alternative arrangements when interest rates fall. 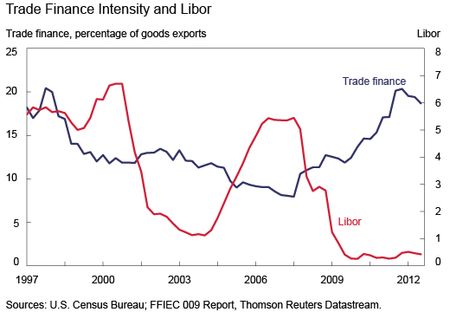 The trade finance intensity of exports is also correlated with uncertainty. The next chart plots trade finance intensity and the four-quarter moving average of the CBOE Volatility Index (VIX), which is a measure of global financial market uncertainty. When uncertainty rises, both trading partners are more concerned that the counterparty might default. LCs then become more attractive since they reduce the risk for both sides of the transaction. 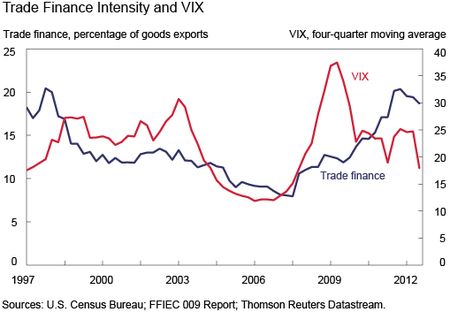 The data also suggest that the use of LCs depends on country risk, which we measure by a composite index of sovereign, banking, and currency risk from the Economist Intelligence Unit (EIU). The chart below illustrates the relationship between LC use and country risk that results from regression analysis. The EIU country risk is on the x-axis and a measure of the use of LCs compared to a hypothetical risk-free country is on the y-axis.

Consider three countries with different risk levels: Spain (risk index of 43), Vietnam (risk index of 58), and Yemen (risk index of 72). The chart shows that if Spain was as risky as Vietnam, the share of U.S. exporters that ship to Spain and use LCs would increase by 15 percent. If Spain were to become as risky as Yemen, then the use of LCs would barely change because the relationship between LC use and country risk is nonlinear. U.S. exporters demand letters of credit the most from importers that are located in countries with intermediate levels of risk. 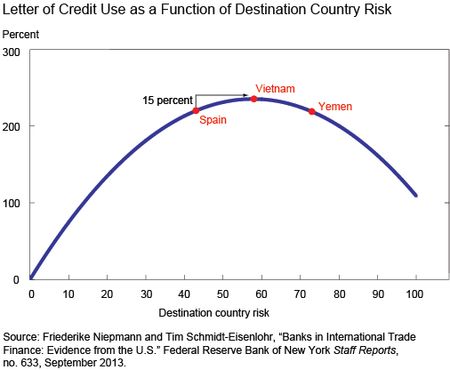 To understand the hump shape, consider the chart below, which has a hypothetical U.S. exporter’s profits under the three different payment forms as a function of the default risk of the importer. Start on the left hand side, where the country risk is low. In this case, the exporter makes the highest profits with an open account, as the low risk of an importer means money can be saved by not relying on a letter of credit. 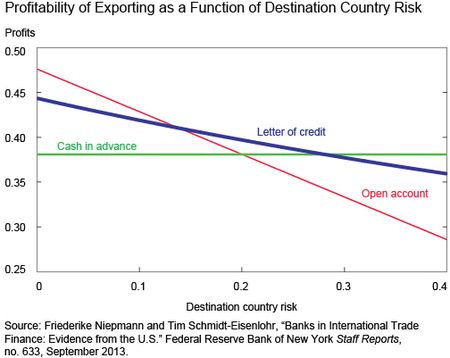 As risk rises, an LC becomes more attractive relative to an open account. At some point, the gain from using an LC is greater than the bank fee. At an even higher level of risk, though, increases in the bank fee due to the additional risk push the two sides of the trade to shift to a cash-in-advance arrangement, which eliminates the risk of the importer defaulting.

This and our previous post on trade finance present the first detailed analysis of the trade finance business of U.S. banks. We show how trade finance varies with macroeconomic factors and how country risk determines when U.S. exporters use LCs to settle their trade transactions.


Tim Schmidt-Eisenlohr is an assistant professor of economics at the University of Illinois at Urbana-Champaign.
Posted by Blog Author at 07:00:00 AM in Exports, Financial Institutions, International Economics

Chris, Thank you for the comment. We updated the label on the data point to read “Yemen” in the chart showing “Letter of Credit Use as a Function of Destination Country Risk.” We regret the error.

Error in text (or on graph), Yemen should be Jamaica for country risk-LC graph discussion.