The Federal Reserve Bank of New York today released results from its February 2015 Survey of Consumer Expectations Credit Access Survey, which provides information on consumers' experiences with and expectations about credit demand and credit access. The survey shows little change in application rates for credit over the last twelve months, but a decline in rejection rates, in particular for credit card limit increases. The expectations component of the survey shows an increase in the average likelihood of consumers applying for credit over the next twelve months for all five credit products; the increase is most pronounced for mortgage refinances and higher credit card limits.

We introduced the survey in an earlier blog post. Here, we provide some highlights from the new release.

Consumer Experiences
The chart below shows that the distribution of credit seekers was largely unchanged from the October 2014 survey: 30 percent of respondents applied for credit over the last twelve months and were granted credit, 10 percent applied for credit and were rejected, and 6.7 percent were too discouraged to apply, despite indicating a need for credit. 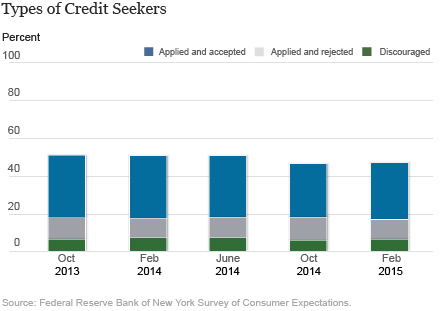 Overall, credit application rates remained steady at 40 percent, the same level that was reported four months ago. The share of applied and rejected credit seekers, as well as the rejection rates among applicants, declined for the more creditworthy groups, but rose for the least creditworthy group (consumers with a self-reported credit score of 680 or less) from 29 percent in October 2014 to 33 percent in the recent survey.

Consumer Expectations
Turning to the expectations component of the survey, the proportion of respondents who report that they are somewhat or very likely to apply for at least one type of credit over the next twelve months decreased from 32 percent in October 2014 to 29 percent in February 2015, back to levels seen during the first half of 2014. This decline was largely driven by middle-aged respondents (ages 41 to 59).

At the same time, however, the average likelihood of applying for credit over the next twelve months (reported on a 0-100 scale) increased for each credit type separately. This could be consistent with the lower proportion of respondents reportedly applying for any credit over the next twelve months if, for example, the increase in likelihood of applying for different credit types is more concentrated among a smaller subset of the population who are likely to apply for multiple loans, or if those likely to apply for credit are much more certain about doing so going forward (than they were in the past). 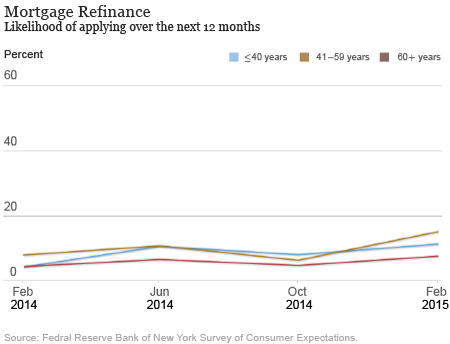 The average perceived likelihood of the credit application being rejected, conditional on applying, remained relatively stable for mortgages, credit cards, and auto loans, but declined slightly for credit card limit increase requests and mortgage refinance applications. For example, the average likelihood of a mortgage refinance application being rejected declined from 31 percent in October 2014 to 28 percent in February 2015.

Detailed findings from the survey, including interactive charts, are available on the SCE Credit Access Survey page.

Basit Zafar is a senior economist in the Bank’s Research and Statistics Group.
Posted by Blog Author at 10:15:00 AM in Credit, Household Finance, Inflation