No Guarantees, No Trade!

World trade fell 20 percent relative to world GDP in 2008 and 2009. Since then, there has been much debate about the role of trade finance in the Great Trade Collapse. Distress in the financial sector can have a strong impact on international trade because exporters require additional working capital and rely on specific financial products, in particular letters of credit, to cope with risks when selling abroad. In this post, which is based on a recent Staff Report, we shed new light on the link between finance and trade, showing that changes in banks’ supply of letters of credit have economically significant effects on firms’ export behavior. Our research suggests that trade finance helps explain the drop in exports in 2008–2009, especially to smaller and poorer markets.

Because international trade is riskier than domestic sales, many firms rely on the support of banks when shipping to foreign destinations. The most important trade finance instruments offered by banks are letters of credit. According to data from the SWIFT Institute, letters of credit are employed for 9 percent of U.S. goods exports. The exhibit below shows in detail how a letter of credit works. Essentially, a bank in the source country collaborates with a bank in the destination country to reduce the risk that the exporter does not deliver and the importer does not pay. The confirming bank pays the exporter only upon proof of delivery of the goods. At the same time, the issuing bank has ways to increase the importer’s incentive to pay. It only releases the ownership documents to the importer upon proof of payment and may demand a cash deposit or other type of security before issuing the letter of credit. This way, a letter of credit significantly reduces the risk of a transaction for both trading partners, with banks acting as intermediaries. 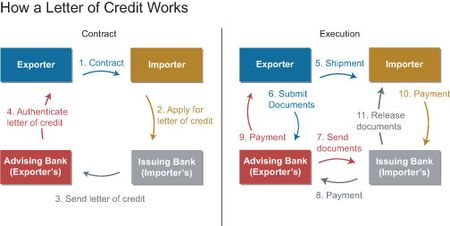 When a bank extends a letter of credit, it takes on risk by guaranteeing the importer’s payment. At the same time, it needs to refinance the letter of credit on the capital market. Therefore, a bank may not provide this service when it does not want to increase its exposure or it is not liquid. Firms could try other banks but that is likely to be difficult. First, banks not familiar with the specific firms may not be willing to issue or confirm a letter of credit since they don’t know the underlying risk. Second, the trade finance business is very concentrated. There are many destinations where only a handful of U.S. banks are active. In fact, only the big banks have large networks of correspondent banks and confirm letters of credit for the smaller markets. These factors make it difficult for firms to switch between banks.

The key challenge in exploring the link between finance and international trade is to distinguish supply effects from demand effects. If we observe that trade falls at the same time as banks’ trade finance claims, this may not be owing to a lack of supply. Instead, there may simply be less demand for trade and, therefore, less demand for letters of credit. To get around this problem, we follow a strategy that is illustrated in the exhibit below.

Let’s assume we want to figure out by how much the supply of letters of credit for trade with India changed between two quarters. In a first step, we look at the activities of U.S. banks outside of India, say in Mexico and Italy. We use this information to determine by how much bank A reduced its overall supply of trade finance relative to bank B. We can control for changes in demand at the country level because these affect both banks equally. In a next step, we look at how important bank A and bank B are for the provision of letters of credit in India. In the exhibit, bank A provides 80 percent of all trade finance to India, whereas bank B supplies 20 percent. A reduction in supply by bank A should therefore have a stronger effect on exports to India than the same reduction by bank B. To capture this, we weigh each bank’s change between two quarters by its lagged market share and sum the weighted changes over all banks. This gives us a measure of the aggregate change in the supply of letters of credit by U.S. banks for India. 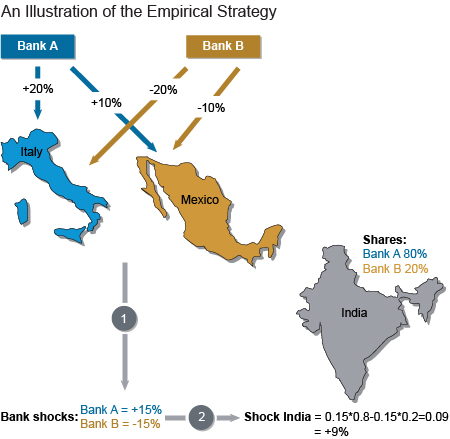 The table below quantifies our results further, taking into account the geographic distribution of banks’ trade finance activities. It shows what would happen to U.S. exports, by region, if two large U.S. banks decreased their supply of letters of credit significantly during a time of financial turmoil. Since the two banks specialize in different destination countries, exports to different regions would be affected differentially.

Overall, we find evidence that banks decrease their supply of trade finance when their funding conditions worsen. Given that banks’ balance sheets deteriorated and credit default swap spreads widened during the recent financial crisis, it is likely that trade finance magnified the drop in exports, especially to the poorer and smaller markets, in 2008–2009. Our findings thus provide support for the view of the WTO that a lack of trade finance in poor countries adversely affects global trade.

Since the crisis, there have been considerable changes in the trade finance business. Higher due diligence requirements and other regulatory developments have led banks to cut back this traditional business model. At the same time, new ways of providing trade finance are being developed. Most notably, financial institutions have started using trade guarantees to create asset-backed securities. Whether securitization will increase the supply of trade finance and alleviate potential constraints remains to be seen.


Tim Schmidt-Eisenlohr is an assistant professor of economics at the University of Illinois at Urbana-Champaign.
Posted by Blog Author at 07:00:00 AM in Exports, Financial Institutions, Inflation, International Economics