How Sensitive Is Housing Demand to Down Payment Requirements and Mortgage Rates? -Liberty Street Economics 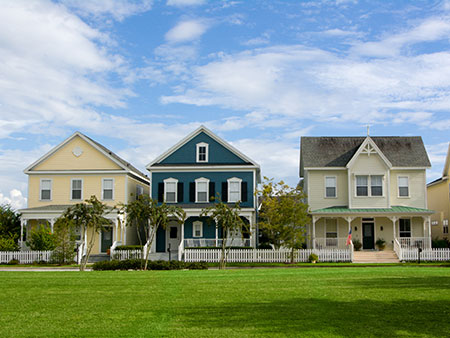 
Methodology
Isolating the effects of financing conditions on housing demand and house prices is hard because these financing conditions don’t evolve in a vacuum. Take mortgage rates: they generally follow yields in the bond market, which in turn depend on economic conditions. So, if you see that mortgage rates have fallen relative to last year and house prices have increased, it is difficult to know how much of this increase was really due to the change in rates rather than other changes in economic conditions. Similarly, consider comparing the housing demand of two households, one of which is allowed by the bank to make a low down payment while the other is asked to make a high down payment. The bank presumably has a reason for asking the second household for a higher down payment—for instance, it may be at higher risk of default. Then, if this household buys a cheaper home, that may be partly due to its economic circumstances rather than the higher down payment requirement.


How important are down payment requirements?
In our first scenario, all households must make a 20 percent down payment. In the second scenario, their down payment can be as low as 5 percent of the purchase price. Based on these scenarios, we find that on average, WTP increases by about 15 percent when households can make a down payment as low as 5 percent of the purchase price instead of having to put down 20 percent. However, this average masks large differences in sensitivity across households. In fact, almost half the respondents do not change their WTP at all when the required down payment is lowered. On the other hand, many respondents increase their WTP very strongly in the second scenario with the lower down payment requirement. This is particularly true for respondents who are current renters (and often relatively less wealthy): their WTP on average increases by more than 40 percent. They also tend to choose lower down payment fractions than current owners; for instance, 59 percent of renters but only 36 percent of owners choose a down payment fraction of 10 percent or lower. 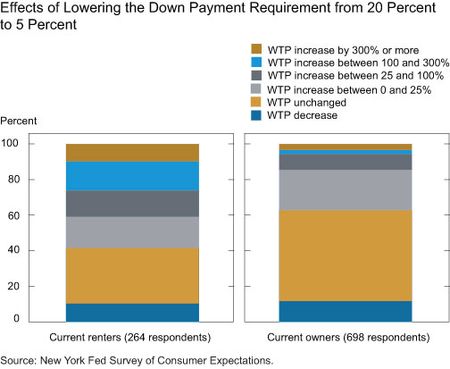 Posted by Blog Author at 07:00:00 AM in Household Finance, Housing, Inflation

I liked this article, and would enjoy the reading the entire study, or executive summer. I feel the data and chart on down payments are easily understood, and especially useful for those building product in the lower price points.

Would it be OK for me to cite the down payment WTP figures in my studies, if applicable? If so, how would you like to be credited in the source box?

Secondly, on interest rates, did you consider using two payment scenarios vs two distinct interest rates? On a $200K/30yr loan the payment would increase from about $1,013 to over $1,264, more by $250+ month. Some people may not grasp that a 4.5% vs 6.5% rate equates into a payment 24%+ higher on a $200K/30yr mortgage. (source: Navy Federal Credit Union website mortgage calculator)

Thanks again for sharing good quality work on a subject that will become increasingly important to the housing industry in the coming years.