« Upstate New York Job Growth: The Bad News Is that the Good News Was Wrong | Main | How the Fed Smoothed Quarter-End Volatility in the Fed Funds Market » 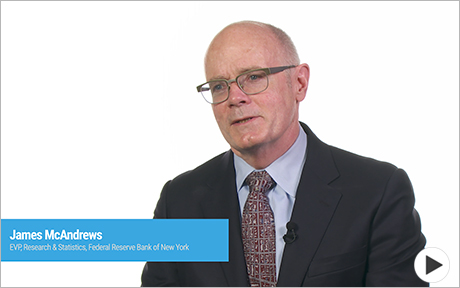 When we launched our research blog five years ago this week, we didn’t expect to set any internet traffic records while writing about economics. Still, we saw that a blog would be a good way to build familiarity with our research and policy analysis, and to share the expertise of our staff when it’s relevant to issues in the public eye. As I said back at the birth, our goal was to deliver “lively, clear, and analytically sound” posts and, in that, I think we have succeeded.

What do the numbers say? In five years we’ve published more than 550 posts, and while none have broken the internet (as we predicted and to our relief, actually), our views have increased steadily every year, reaching over 1.5 million last year, almost twice the number for 2014. 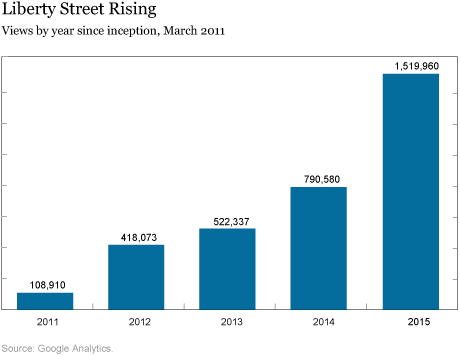 It has been enormously rewarding to see this work informing news stories, invoked in congressional testimony, cited in major speeches, incorporated in college reading lists, and discussed and disputed at conferences and cocktail parties.

While we started Liberty Street Economics with an analytic focus, we have since expanded our scope with lighter series that have also proved popular: Historical Echoes, Crisis Chronicles, From the Vault, and lately, "Hey Economist!", a Q&A series putting our economists on the spot.

Producing the LSE has been a highly collaborative affair. While the more than sixty economists in the Research Group share the joys and burden of writing our posts (along with our tireless publications and library staff), we also tap the expertise of colleagues elsewhere at the New York Fed, the Federal Reserve System, other central banks, and in academia as coauthors. Readers play a role, too—their comments and questions on our first market liquidity series motivated and shaped this follow-up series.

We would also like to think we’ve encouraged other central bank bloggers. When we entered the blogosphere, there were few research blogs published by central banks—seemingly just the Atlanta Fed’s macroblog and ours. Since our launch we’ve seen the debut of the Federal Reserve Board’s FEDS Notes and the Bank of England’s Bank Underground, and our editors, Andy Haughwout, Tom Klitgaard, and Don Morgan, have shared our experience with other central banks contemplating blogs, so more may be on the horizon.

As we celebrate this milestone, we invite you to keep reading and discussing our work. Thank you for joining us along the way. And while five years may seem short, in blog years, it’s like, forever.

Five Candles: Our Greatest “Hits” by Year
2011: Commodity Prices and the Mistake of 1937: Would Modern Economists Make the Same Mistake?

2013: Are Stocks Cheap? A Review of the Evidence

2016 (to date): Are Asset Managers Vulnerable to Fire Sales?

Jamie McAndrews is an executive vice president and the director of research at the Federal Reserve Bank of New York.
Posted by Blog Author at 07:02:00 AM in DSGE, Macroecon