« Why Dealers Trade in GCF Repo® | Main | Historical Echoes: Echoes, Schmechoes, This Post Only Has a Drop of History in It »

By Marco Cipriani and Adam Copeland In the third post in this series, we examined GCF Repo® traders’ end-of-day strategies. In this final post, we further our understanding of dealers’ behavior by looking at their trading pattern within the day.

Pure Borrowers and Pure Lenders
Using confidential GCF Repo data from the first half of 2015, we study to what extent, within a day, dealers enter into GCF Repo contracts with the main purpose of either borrowing cash or lending cash. We label dealers as “pure borrowers” if at least 90 percent of their GCF Repo activity consists of borrowing (repos). Similarly, we label dealers as “pure lenders” if at least 90 percent of their activity in the GCF platform consists of lending (reverse repos). Dealers that do not fit in either category are labeled “mixed.”

As the table below shows, among the fifty-seven dealers active in GCF Repo over our sample period, twelve can be classified as pure borrowers and six as pure lenders, comprising 7 percent and 14 percent of total daily activity, respectively. Moreover, between 2012 and 2015, dealers’ behavior has been highly persistent: the probability that a dealer classified as a pure borrower in a given half-year would remain so in the following one was 86 percent; the corresponding probability for a dealer classified as a pure lender was 71 percent. This result recalls our finding in the preceding post that dealers tend to persist in their borrowing and lending behavior. 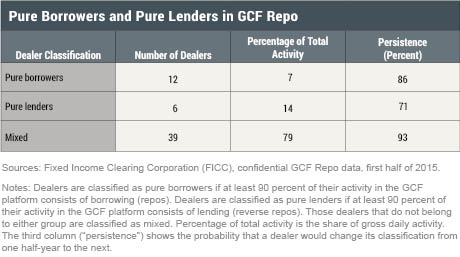 Collateral Transformation
Dealers not classified as pure lenders and borrowers (that is, dealers classified as mixed) conducted significant amounts of both repo and reverse repo contracts within a day. A feature of GCF Repo is that a dealer only needs to settle its cash net position—the difference between its repo and reverse repo positions—at the end of the day. As the first column of the table below shows, mixed dealers’ average daily net-to-gross ratio (that is, the ratio between their end-of-day position and their total activity in the GCF Repo market) was 40 percent. On average, for each of these dealers, the amount of GCF Repo activity that was netted out and, consequently, did not result in any (end-of-day) net lending or borrowing was $13.56 billion per day; the amount that each dealer settled at the end of the day was on average $1.23 billion (third column).

Dealers enter into repo and reverse repo contracts within a given day for various reasons, such as intermediating between two counterparties or providing and absorbing intraday liquidity. They may also engage in “collateral swaps,” lending securities in one asset class and borrowing securities of another asset class, in order to change the composition of their portfolio.

As the fourth column of the table above shows, the amount settled at the end of the day by dealers not classified as pure buyers and pure lenders was 80 percent of what it would have been if dealers did not engage in collateral swaps. In other words, collateral swaps were a meaningful, but not dominant, reason for dealers to enter into GCF Repo contracts over our sample period.

Conclusion
We studied the intraday trading pattern of dealers active in GCF Repo during the first half of 2015. A significant number of dealers enter into GCF Repo contracts with the main purpose of either borrowing or lending funds. Among those dealers entering into GCF Repo contracts for intermediation purposes, a significant proportion of activity can be attributed to collateral swaps. We do not find meaningful differences when comparing the dealers on the two clearing banks.

Adam Copeland is a research officer in the Bank’s Research and Statistics Group.