« Household Consumption Mobility over the Life-Cycle | Main | Did the Supervisory Guidance on Leveraged Lending Work? »

Crisis Chronicles: Gold, Deflation, and the Panic of 1893 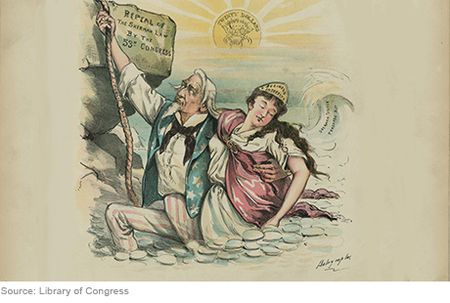 In the late 1800s, a surge in silver production made a shift toward a monetary standard based on gold and silver rather than gold alone increasingly attractive to debtors seeking relief through higher prices. The U.S. government made a tentative step in this direction with the Sherman Silver Purchase Act, an 1890 law requiring the Treasury to significantly increase its purchases of silver. Concern about the United States abandoning the gold standard, however, drove up the demand for gold, which drained the Treasury’s holdings and created strains on the financial system’s liquidity. News in April 1893 that the government was running low on gold was followed by the Panic in May and a severe depression involving widespread commercial and bank failures.

Gold versus Gold and Silver
One problem with defining the value of the dollar in terms of gold is that gold’s value fluctuates relative to all other goods and services as the supply or demand for gold changes. This was the case before the Panic when economic growth was not accompanied by an increase in the supply of gold, putting downward pressure on prices. The result was deflation and rising real debt burdens. Production of silver, though, was picking up based on new discoveries and new technologies, leading to calls for a return to “bimetallism,” in which the dollar is based on both metals, with the price ratio of the two metals set by the government.

Gold versus bimetallism was a hotly contested issue, not least among economists. Milton Friedman’s review of the debate reveals his sympathy for bimetallism. Essentially, tying a currency’s value to two metals moderates the impact of a shift in supply or demand for one metal on a country’s price level. Or as Friedman puts it, “a bimetallic standard always yields a steadier price level than at least one of the two alternative monometallic standards and may yield a steadier price level than either.” He concludes by saying that “far from being a thoroughly discredited fallacy, bimetallism has much to recommend it on theoretical, practical, and historical grounds as superior to monometallism.” (p. 102)

Elites hated the idea, noting that the British Empire had been built relying on a gold standard. The United States followed Britain’s example and stopped fixing the ratio of gold to silver prices with the Coinage Act of 1873. Silver could still be used as legal currency, but the ratio with gold was no longer fixed. Wall Street opposed bimetallism out of fear that it would foster inflation and thus erode the real value of debt and bond holdings.

Bimetal advocates pushed back and eventually succeeded in passing the Sherman Silver Purchase Act of 1890, which required the government to buy an additional 4.5 million ounces of silver each month. The purchases were paid for with paper currency that could be redeemed for silver or gold.

The Wrong Kind of Gold Rush
The Sherman Act generated fears that the country would drop the gold standard and people reacted by converting their assets into gold. Concerns were heightened when Treasury Secretary Carlisle announced on April 22, 1893, that the government’s holdings of gold had dwindled to unusually low levels. Two days later, President Cleveland tried to quell concerns that Treasury would suspend convertibility of its notes into gold:

“The inclination on the part of the public to accept newspaper reports concerning the intentions of those charged with the management of our national finances seems to justify my emphatic contradiction of the statement that the redemption of any kind of Treasury notes except in gold has at any time been . . . contemplated by the Secretary of the Treasury or any other member of the present Administration.” (“Redeemed Only in Gold: Statement by the President of His Financial Policy,” New York Times, April 24, 1893)

Cleveland’s convoluted reassurance was not enough. Gold was being hoarded and was also flowing out of the country. As seen in previous panics, the financial system tends to fall apart when everyone attempts to convert their assets into gold at the same time.

Give ‘em Enough Rope
The stock market crashed less than two weeks after the Treasury’s announcement. Railroad bankruptcies and the failure of National Cordage, a major firm on the stock exchange that had unsuccessfully tried to corner the rope market, compounded the financial effects of the news. The aftermath was severe, with an estimated unemployment rate above 11 percent from 1894 to 1898.

While it is difficult to know the precise role of different events in causing the panic and depression, many at the time blamed it squarely on silver:

Not since 1884 had the stock market had such a break in prices as occurred yesterday, and few days in its history were more exciting. In the industrial shares particularly there was a smashing of values almost without precedent. . . . In the excitement over the attacks on the industrials the news that gold exports would be made on Saturday helped along the bear campaign. . . .The general distrust caused by the silver purchase law had much to do with making yesterday’s raids possible, and Wall Street is hopeful that the day’s experience may be useful in impressing the evil results of that piece of legislation upon the country. A finer object lesson would be hard to find. (“Industrials Were Hard Hit: A Great Day for the Bears in Wall Street,” New York Times, May 4, 1893)

The Politics of Silver and Gold
Congress responded to the depression by repealing the Sherman Act in August 1893 by a surprisingly lopsided vote. “The only disconsolate men in Washington last night were those who have allied themselves with the silver movement. They were prepared for defeat in the House, but not for such an overwhelming defeat.” (“Silver Men Are in the Dumps: Expected to Be Defeated, but Not So Overwhelmingly,” New York Times, August 30, 1893)

President Cleveland was a Democrat, and the Democratic Party was largely in favor of bimetallism. Cleveland’s alliance to gold strained the party, which went on to nominate the bimetallist William Jennings Bryan for the 1896 election. Initially an underdog, Bryan won the nomination, helped by his famous Cross of Gold speech condemning the gold standard as a tool for the elite:

“. . . the question we are to decide is, upon which side will the Democratic party fight—upon the side of ‘the idle holders of idle capital,’ or upon the side of ‘the struggling masses?’ . . . There are those who believe that if you will only legislate to make the well-to-do prosperous their prosperity will leak through on those below. The Democratic idea, however, has been that if you legislate to make the masses prosperous their prosperity will find its way up through every class which rests upon them. . . . We will answer their demand for a gold standard by saying to them: You shall not press down upon the brow of labor this crown of thorns; you shall not crucify mankind upon a cross of gold.”

Bryan lost the 1896 election as the Democrats were held responsible for the depression. The gold standard soon receded as an issue and it was not a point of contention when Bryan ran four years later, primarily because gold discoveries in Canada and South Africa meant that the gold standard was boosting prices instead of restraining them.

According to Milton Friedman, the populist rhetoric of Bryan made sense because a gold standard in a world with a gold shortage is bad monetary policy. The two men’s thinking is not perfectly aligned, however, as the latter wanted higher prices (to reduce debt burdens) and the former wanted stable prices. Still, Friedman and Bryan were on the same side of the monetary policy debate in the nineteenth century. Should today’s gold bugs rethink their beliefs given Friedman’s analysis and consider the merits of bimetallism? Let us know what you think.

Epilogue: Sly Commentary in a Children’s Book
Rockoff argues that The Wizard of Oz, the 1900 book by Frank Baum, can be read as an allegory for the gold versus bimetal battle. Dorothy lives on a farm, impoverished by falling prices. The cyclone is the free silver movement carrying Dorothy to the East, where she follows a yellow brick road (the gold standard) to meet the all powerful Oz (ounce of gold). The Wicked Witch of the East (Cleveland) dies, leaving only magical silver slippers. Along the way to the Emerald City (Washington, D.C.), Dorothy meets the Scarecrow, representing the western farmer, who thinks he needs a brain but is actually smart enough to understand the debate over silver. The Tin Man is the working man, whose unemployment has caused him to lose his heart and to have rusted. The Cowardly Lion is Bryan himself, who roared at the convention with his Cross of Gold Speech, only to reverse and downplay silver in the 1900 campaign.

How many times do we need to relearn the lessons of the Great Depression. The gold standard was a main cause of that crisis; reverting to it now would likely trigger a similar crisis.

BTW, normally when you make predictions about future events and those event don't transpire, you rethink your priors. Alarmist predictions about inflation have turned out to be horribly off the mark. Wouldn't that be a good reason to reconsider the basis for your erroneous predictions?

You ask: Should today’s gold bugs rethink their beliefs given Friedman’s analysis and consider the merits of bimetallism? Let us know what you think.

My answer: Yes, for price level stability. It is sort of like the "trusted custodian/clearing house vs. blockchain" debate. The main advantage of either a bimetallic currency or a currency tied to bimetallic redemption at face value is that it enables the public to verify that the currency issuers are not cooking the books. During the great expansion of the Fed's balance sheet, 2008-2015, especially outside the financial centers of the Northeast, many members of the public became fearful that the rate of expansion, without a concomitant expansion in the production of goods, threatened a return at least to the high levels of inflation of the 1970s, when the size of the Fed's balance sheet roughly doubled during the decade. In the recent expansion, the balance sheet roughly quintupled.

Fortunately for the price level, the expanded monetary base has not (yet) moved from the banks to the general public. Advocates of bimetallism would have avoided the problem by limiting the Fed's capacity to expand claims on itself due to the necessity of redemption. Friedman's point is correct that silver keeps gold honest and vice versa. Without bimetallism, the price level is determined by the honesty and competency of the Fed and Treasury, working together with the banking community. The latter trio are the trusted custodians in my analogy; bimetallism would be the blockchain. Which system is more trustworthy?