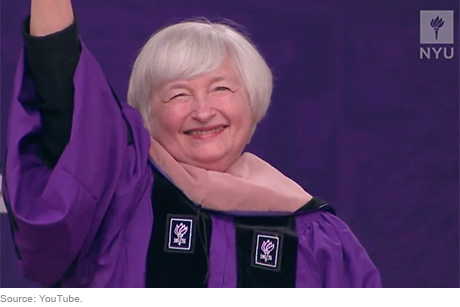 J.K. Rowling, David Byrne, Eric Idle—In recent years, these captivating figures have delivered commencement addresses at Harvard, Columbia University and Whitman College, respectively. Of course, Federal Reserve chairs give commencement speeches too, and good ones. NPR maintains a list of some standouts, “The Best Commencement Speeches, Ever” (this is a cool interactive website that enables you to search by name, school, year, or by theme—play, inner voice, embrace failure, change the world, make art, etc.). Its roundup of graduation season remarks includes Janet Yellen’s 2014 speech at New York University, and Ben Bernanke’s 2013 speech at Princeton. Another list, “Best Commencement Speeches Of All Time,” includes Alan Greenspan’s 1999 commencement speech at Harvard.

A brief look at speech highlights going back through the tenure of three Fed chairs shows just how common this speech-giving is.

Finding the right path in life, more often than not, involves some missteps. My Federal Reserve colleagues and I experienced this as we struggled to address a financial and economic crisis that threatened the global economy. . . . I learned the lesson during this period that one's response to the inevitable setbacks matters as much as the balance of victories and defeats.


Life is amazingly unpredictable; any 22-year-old who thinks he or she knows where they will be in 10 years, much less in 30, is simply lacking imagination. . . . Don't be afraid to let the drama play out.


See also this article from The Atlantic praising the speech, and Reuters’ coverage of the address noting how funny and meticulous Bernanke is.


Success and satisfaction will not come from mastering a fixed body of knowledge but from constant adaptation and creativity in a rapidly changing world. . . . And while I have emphasized technological and scientific advances today, it is important to remember that the arts and humanities facilitate new and creative thinking as well, while helping us to draw meaning that goes beyond the purely material aspects of our lives.


2010
Ben Bernanke, “The Economics of Happiness,” delivered at the University of South Carolina
Text

Sometimes, difficult choices can open the doors to future opportunities, and the short-run pain can be worth the long-run gain. Just as importantly, life satisfaction requires an ethical framework. Everyone needs such a framework. In the short run, it is possible that doing the ethical thing will make you feel, well, unhappy. In the long run, though, it is essential for a well-balanced and satisfying life.


2009
Ben Bernanke at the Boston College School of Law
Text

So, my advice to you is to stay optimistic. Things usually have a way of working out. My second piece of advice is to be flexible, even adventurous as you begin your careers. As I have tried to illustrate today, you are much less able than you think to foresee how your life, both professional and personal, will play out. The world changes too fast, and too many accidents and unpredictable events occur. It will pay, therefore, to be creative and open-minded as you search for and consider professional opportunities. Look most carefully at those options that will give you a chance to learn new things, explore new areas, and grow as a person. Think of every job as a potential investment in yourself. Will it prepare your mind for the opportunities that chance will provide?

Remember that the path to success and fulfillment may not be well marked, the scaling of some predetermined ladder; it may instead be a road without signs or maps. And remember that it is OK to fail—really: New opportunities will always arise for those who seek them. If you remain nimble in searching out new and unexpected opportunities, it will not only benefit you, but it will also benefit the economy and our society, as long experience has shown that dynamism and creativity are the seeds of innovation and of progress.

In the personal sphere, as you make your way in the world, I hope you will not forget the importance of your family and how much it has already contributed to your journey through life. . . . Even as you focus intensively on your professional interests, I hope you will remain intellectually broad—well-read, well-informed, and open to new experiences. And finally, I hope you will remain engaged with the broader society.

I have more in common with you graduates than people might think. After all, before long, after my term at the Federal Reserve comes to an end, I too will be looking for a job. . . . I presume that I could offer all kinds of advice to today's graduates from my nearly six decades in private business and government. I could urge you all to work hard, save, and prosper. And I do. But transcending all else is being principled in how you go about doing those things. It is decidedly not true that "nice guys finish last," as that highly original American baseball philosopher Leo Durocher was once alleged to have said.

I do not deny that many appear to have succeeded in a material way by cutting corners and manipulating associates, both in their professional and in their personal lives. But material success is possible in this world, and far more satisfying, when it comes without exploiting others. The true measure of a career is to be able to be content, even proud, that you succeeded through your own endeavors without leaving a trail of casualties in your wake.

An agile young mind has the facility to solve a complex set of equations. But that mind must be broadened if it is to make effective use of that solution to meet human needs. There is little doubt of the relationship between our ability to think creatively and our productiveness as individual members of society. . . .

Viewing a great painting or listening to a profoundly moving piano concerto produces a sense of intellectual joy that is satisfying in and of itself. But, arguably, it also enhances and reinforces the conceptual processes so essential to innovation. . . .

At the risk of sounding a bit uncool, I say to the graduating class of 1999 that your success in life, and the success of our country, is going to depend on the integrity and other qualities of character that you and your contemporaries will continue to develop and demonstrate over the years ahead. A generation from now, as you watch your children graduate, you will want to be able to say that whatever success you achieved was the result of honest and productive work, and that you dealt with people the way you would want them to deal with you.


After you have been elevated to a different plane by these words of wisdom, you can read a 2012 blog post by the New York Times Magazine staff: Do Commencement Speeches Matter? Apparently not. It appears that graduates may remember big-name commencement speakers, but not much of the wisdom they chose to share.

I will remember May 21, 2014 forever. I attended the event in Yankees Stadium as a NYU Stern MBA graduate. It was a proud moment as a FRBNY employee to graduate when the Fed Chair(wo)man gave the commencement speech. She said that you need to have persistent curiosity and willingness to listen to succeed. You will not succeed every time. Finding the right path involves a series of missteps. You need to have a grip and willingness to take a stand for what you believe when circumstances demand. Pursue your passion especially if there is a purpose to your passion.

On May 23rd, I sent a thank you note to her email address describing briefly about the proud moment. She responded with her best wishes within an hour. It confirmed what I had heard about her. She reads all her emails and responds to them personally. She is truly inspiring.