« QE Frictions: Could Banks Have Favored Refinancing over New Purchase Borrowing? | Main | At the N.Y. Fed: Press Briefing on Household Borrowing with Close-Up on Student Debt » 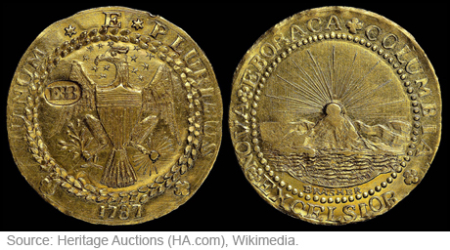 Whatever the vagaries of the market, gold is a perennially hot commodity in the popular imagination—especially in the minds of authors and screenwriters. In this Historical Echoes post, we take a look at Raymond Chandler’s 1942 Philip Marlowe novel The High Window, which uses a stolen gold coin—the Brasher Doubloon—as a plot device.

The High Window was adapted for the screen twice: first as Time to Kill (watch) in 1942, then as The Brasher Doubloon (theatrical trailer) in 1947. (Sorry Bogie fans—he’s in neither film.) All three artistic endeavors feature the Brasher Doubloon, America’s first struck gold coin, made by the silver- and goldsmith Ephraim Brasher in 1787.

The book and films differ somewhat with respect to characters and subplot (the second movie leaves out the character of a dentist who offers advice about casting materials and techniques to create counterfeit coins).

The three versions of the story also provide different information about the coin itself, citing various factors to account for the coin’s rareness and value: its scarcity (the films), its mint condition (the book and the later movie), its history (the later movie), and, of course, its age (all three). In all three versions of the story, information about the coin is provided by two characters: the coin’s severe, elderly owner, Mrs. Murdock, and a numismatist.

In the first movie, Mrs. Murdock relates the backstory of the stolen coin:

When my husband died, he left me a valuable collection of old coins, the rarest of which was a Brasher Doubloon ... it's an old American gold coin about the size of a twenty dollar gold piece. Ordinarily a copy's worth several thousand dollars, but mine happens to be particularly valuable because the designer, a man called Brasher, put his initials on the left wing of the eagle [found on one face of the coin] instead of the right.

The left wing/right wing discrepancy is an idea made up for this movie. In fact, Brasher’s initials always appear on the left side of the eagle, although sometimes on its wing and sometimes on its breast. The numismatist character does not add much more information, other than to say that the Brasher Doubloon is a very rare piece.

A rare gold coin called the Brasher Doubloon. It's a collector's item, worth at least $10,000, probably more. It's a mint specimen. There are only two of them in the whole country. The Smithsonian Institute has the other.


In this statement, Mrs. Murdock is correct about the Smithsonian’s ownership, but incorrect about the number of coins. The movie’s numismatist character, Mr. Morningstar, offers further information, describing the coin as:

Extremely interesting and valuable ... because it's rare and because it has a romantic and violent history ... first the man who coined it was murdered and robbed through the treachery of a female and since then, at least seven other owners of the coin have come to abrupt, unhappy ends.


His description is colorful—but entirely made up.

In the Chandler book itself, Mrs. Murdock does not convey any real information about the coin, but the numismatist character goes on for almost a page as to why the coin is interesting and valuable:

It is a gold coin, roughly equivalent to a twenty-dollar gold piece, and about the size of a half dollar. Almost exactly. It was made for the State of New York in the year 1787. It was not minted. There were no mints until 1793, when the first mint was opened in Philadelphia. The Brasher Doubloon was coined probably by the pressure molding process and its maker was a private goldsmith named Ephraim Brasher, or Brashear. Where the name survives it is usually spelled Brashear, but not on the coin. I don’t know why. . . .

The two halves of the mold were engraved in steel, in intaglio, of course. These halves were then mounted in lead. Gold blanks were pressed between them in a coin press. Then the edges were trimmed for weight and smoothed. The coin was not milled. There were no milling machines in 1787. . . And, since the surface-hardening of steel without distortion could not be accomplished at that time, the dies wore and had to be remade from time to time. With consequent slight variations in design which would be visible under strong magnification. In fact it would be safe to say no two of the coins would be identical, judged by modern methods of microscopic examination. Am I clear? . . . .

I don’t know how many there are. Nobody knows. A few hundred, a thousand, perhaps more. But of these very few indeed are uncirculated specimens in what is called mint condition. The value varies from a couple of thousand on up. I should say that at the present time, since the devaluation of the dollar, an uncirculated specimen, carefully handled by a reputable dealer, might easily bring $10,000, or even more. It would have to have a history, of course.


The implication is that one could in theory round up hundreds of examples of this coin, although perhaps not in the greatest condition. In reality, this is not the case. According to a Chicago Sun-Times article (see related videos about the seller, evaluator, and buyer of what is considered the finest Brasher Doubloon specimen), only seven are known to exist.

Further reading:
The doubloon (also spelled “dubloon”) is closely related to a piece of eight—the subject of another Historical Echoes post.

The coins thrown from parade floats to reveling crowds during Mardi Gras are also called doubloons, come in the Mardi Gras colors—green, gold, and purple—and are hollow and light so that when thrown, they will not hurt anyone. See this 2014 post on the Coin World website to learn about the history of Mardi Gras doubloons and the collecting frenzy they have inspired.

You can read a discussion about coins in movies appearing in a coin-lovers web forum.

There is a section of the book Raymond Chandler Speaking that describes why he chose this coin for his plot and how he agonized over the best title for his novel.

The two High Window films also differ as to which female lead becomes Marlowe’s love interest (in the book, the detective ends up with no one). In the first movie, it is Mrs. Murdock’s estranged daughter-in-law, who has been falsely accused of stealing the coin. In the second adaptation, The Brasher Doubloon, the love interest is Mrs. Murdock’s neurotic young assistant; her neurosis is miraculously “fixed” by Marlowe’s romantic attention (at the 2:30 mark; wouldn’t it be great if that actually worked?). The poster for The Brasher Doubloon also features an amusingly feisty 1940s tagline: “SOME WOMEN CAN’T STAND CATS … With Me It’s Men!”

This essay from the Philadelphia Fed sheds some light on the story behind the eye and other symbols found on American money: https://www.philadelphiafed.org/education/teachers/publications/symbols-on-american-money/.

I would be interested in knowing more about the eye-on-the-pyramid motif, which is perpetuated on the dollar bill even today--whose idea was that originally, and how come it is still so widely used, despite being rather strange to the modern mind?

I love this "historical echoes" series, which manages to weave together banking, literature, history, architecture, even cinema. Thank you, FRBNY.