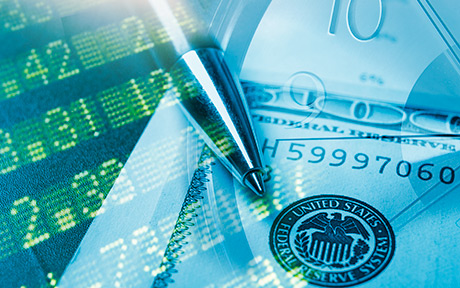 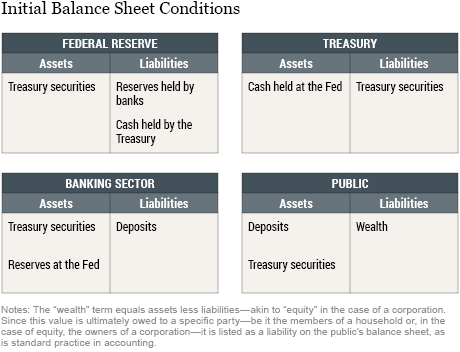 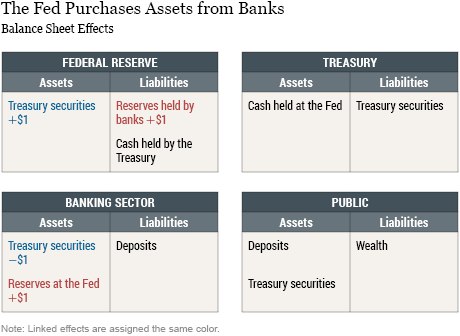 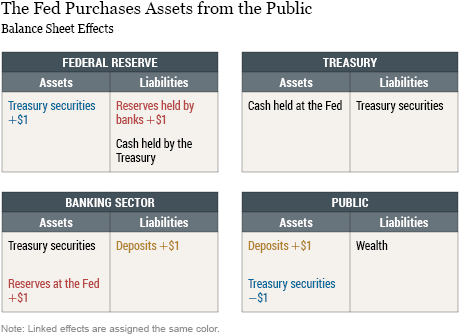 The Fed’s Reinvestment Policy
To build some intuition regarding Fed reinvestment, we first consider the case where Treasury securities held by the Fed mature, the Fed does not reinvest the proceeds of the maturing securities, and the Treasury does not issue new securities. In this case, depicted in the next exhibit, the Treasury pays the Fed by “transferring” cash from the TGA to the Fed as the securities mature. The Fed holds fewer assets but also has fewer liabilities, so the size of its balance sheet decreases. 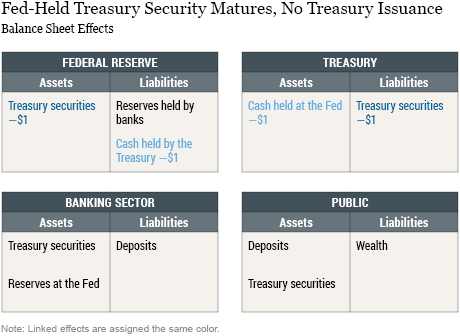 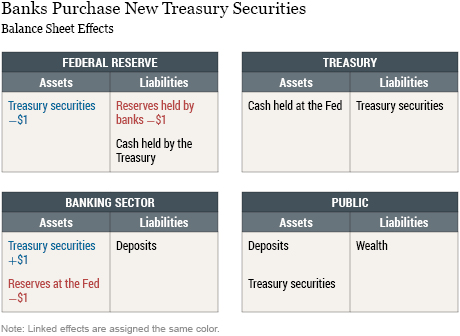 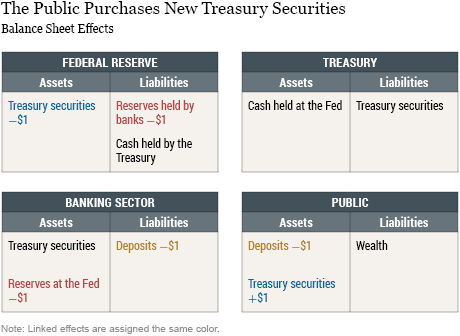 Thank you for your comments. In light of the comments we have received about this post, we decided to write a new post that provides a closer look at the Fed’s balance sheet accounting. This post can be found at the following URL:
http://libertystreeteconomics.newyorkfed.org/2017/08/a-closer-look-at-the-feds-balance-sheet-accounting.html .

Joel:
Thank you for your comment. Congress prohibits the Federal Reserve to purchase securities directly from the Treasury (this staff report provides more details: https://www.newyorkfed.org/medialibrary/media/research/staff_reports/sr684.pdf.)
The securities obtained as part of the large scale asset purchases were bought on the open market. Information about the Federal Reserve’s rollover policy can be found on the New York Fed’s Website at https://www.newyorkfed.org/markets/treasury-rollover-faq.html.

Mr. Leikind asked about the Fed itself not about reserve banks.

He is asking why the Fed itself cannot coordinate with Treasury whereby both parties agree to an accounting offset, essentially erasing their positions.

The answer given to Mr. Elliott supplies the reason as you indicate that the Fed views principal payment made by Treasury as not subject to the remittance rules.

The Fed needs to cite the legal authority for this position.

In plain terms, the Fed has created money/reserves out of the air, as authorized by law, and used it to purchase a Treasury security. Your legal position is that the Treasury (i.e., the public) must borrow anew to pay the principal amount at maturity even though the amounts were made up by Fed officials initially.

Accounting offset is the sane thing to do if remittance is required. It may be the morally correct thing to do regardless of your current opinions on the law.

Douglas:
Thank you for your comment. You note, correctly, that all the Fed’s income, net of costs, is remitted to the Treasury. Payments of principal, however, do not generate distributable income (in contrast to interest payments). As we show in the post, when the Fed holds a Treasury security to maturity and does not roll it over into new securities, two things happen to the Fed’s balance sheet: 1) The securities disappear from the asset side of its balance sheet, and 2) the amount of cash held by the Treasury in its Fed account decreases by the same amount on the liability side of its balance sheet. In other words, instead of paying the Fed by exchanging the maturing security with another asset (as would be the case with a rollover), the Treasury “pays” the Fed by reducing its claim on the Fed.

The Federal Open Market Committee (FOMC) recently described how it plans to reduce the Federal Reserve’s securities holdings in an addendum to its Policy Normalization Principles and Plans (which can be could at this link: https://www.federalreserve.gov/newsevents/pressreleases/monetary20170614c.htm). Principal repayments that are not reinvested will run down the Fed’s securities holdings and reduce the size of its balance sheet through dynamics like those we illustrate in this blog post. The FOMC notes, as you do, that reducing the Federal Reserve's securities holdings will result in a declining supply of reserve balances. But the FOMC has not specified its desired future level of reserve balances, saying only that it anticipates reducing the quantity of reserves to a level appreciably below that seen in recent years but larger than before the crisis. You can find updated staff projections for the future size of the Fed’s domestic securities portfolio—based on a range of market expectations for the long-run level of reserve balances and other Fed liabilities taken from recent surveys—on the New York Fed’s website at https://www.newyorkfed.org/markets/annual_reports.html.

Could you please explain if Treasury repayment of maturing securities to the Fed would be subject to the Fed policy of remittance to the Treasury as interest payments are? It appears from this explanation that it is not.

Has the Fed formally described its intended treatment of principal repayments if they are not reinvested in security purchases?

It appears that under this explanation, to return the fed balance sheet to pre crisis levels, and assuming that the outstanding federal debt remains constant, the fed is anticipating that bank reserves will necessarily shrink by a commensurate amount, upwards of 3 trillion dollars?

Thanks for any further clarification you could provide.

When the Fed purchases a Treasury security from a bank, why doesn't it mark the security Paid In Full, and send it down to the Treasury Department to correct the Treasury's liability account?

Why does the Fed keep the security on its books, collect interest from the Treasury which it sends back to the Treasury at the end of the year, and collect the principal when the security matures? The member of the public, or the bank, that loaned Uncle Sam money has been paid back.