In contemplating the recent financial panic, it is easy to get lost in the weeds of repo markets and asset-backed securities and lose sight of the fact that, at the fundamental level, the panic was about inadequate information. Investors were uncertain about what particular assets were worth, and they were uncertain about which banks were exposed to those assets and to what degree. They were also uncertain about how the government would handle undercapitalized banks. It was against this background that the Treasury announced in February 2009 that the nineteen largest U.S. bank holding companies would be subject to an unprecedented stress test to determine if the banks had sufficient capital to survive and maintain lending in the event of a worse-than-expected recession. In this post, I discuss a recent New York Fed staff report that I wrote with Stavros Peristiani and Vanessa Savino that provides evidence that the stress test supplied new information to the market, and thus may have helped quell the panic.

Our paper studies the stock market response to four distinct events in 2009 associated with the stress test.

The main question in our paper is how each of those events affected the stock prices for the banks in question. The chart below gives a flavor of our results. We plot the average stock price for the two sets of banks—the GAP BANKS and NO GAP BANKS—relative to the S&P financial index. We also show when each of the four events occurred. The sharp divergence between the lines for the two sets of banks in early 2009, well before the stress test was announced, suggests that the market was able to decipher on its own which banks had capital gaps. The Clarification and Results events appear to have had the greatest impact on the stock prices of the GAP BANKS; both events seem to have been good news for that set of banks in aggregate. 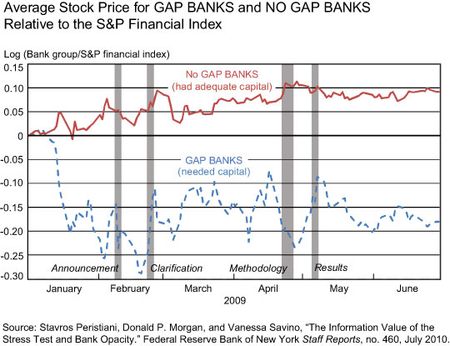 Our formal event study confirms the impression from the chart. Event studies are statistical tests that detect abnormal (relative to predicted) stock returns around some event, or in our case, the four events defined above. We take any abnormal return as indication that new information was reaching the market, leading investors to revalue banks’ shares. The event studies confirm that the Clarification and Results caused the shares of the GAP BANKS to rise relative to those of the NO GAP BANKS.

While the positive response to the Clarification makes sense, we were initially surprised that the release of the Results was good news for GAP BANKS; we expected that the revelation that those banks were deemed insufficiently capitalized would be received as bad news. Of course, the positive aggregate response of the GAP BANKS to the Results could reflect that the capital gaps announced were smaller than the market expected.

To investigate that expectations hypothesis, we estimated cross-sectional models where we regressed the abnormal return associated with the release of the Results on the size of the capital gap announced and a proxy for the expected gap. Our proxy for the expected gap was the abnormal return associated with the Clarification. We reasoned (and provided evidence) that the Clarification—whereby it was announced that banks would not be nationalized based on the results of the stress test and the terms of the CAP were revealed—would only matter for banks expected to have a capital gap. The cross-sectional regressions revealed that, once we controlled for the expected gap, a larger announced capital gap was associated with significantly lower abnormal returns. We concluded that both the Results and the Clarification were informative to the market, and in the fashion one would expect. If one grants our premise that the panic was fundamentally about inadequate information, then our findings suggest that the stress test succeeded in quelling the panic by supplying vital information to the market.

Apart from demonstrating that the stress test was informative, our results also bear on an academic debate about whether banks are fundamentally more opaque than other types of firms. On the affirmative side, I have a paper showing that bond raters disagree more over banks than any other type of firm except insurance firms, banks’ sister intermediary. I concluded that banks are, to some extent, “black boxes;” money flows in and money flows out, but the risks taken in the process of intermediation are to some extent invisible to outsiders. On the negative side, Mark Flannery, Simon Kwan, and Mahendrarajah Nimalendran have a paper showing that earnings for banks are smoother and more predictable than earnings for nonbank counterparts. They concluded that banks are not particularly opaque—they are “boring.” Although I call the debate over bank opacity academic, the answer has real-world implications about the need for government supervision of banks; if banks are no more opaque than other types of firms, market (as opposed to government) discipline might suffice to limit bank risk-taking.

To contribute to the debate, we use our study of the stress test to investigate two extreme versions of the opacity hypothesis: banks are black boxes versus banks are “open books.” Our findings suggest that banks are somewhere between those extremes. On the one hand, our finding that investors were able to decipher on their own which banks would have capital gaps suggests that banks are not entirely black boxes; investors are able to lift the veil to some extent. On the other hand, our finding that the market was surprised by the size of the capital gaps suggests that banks are not entirely open books; government supervisors and economists were able to produce information that the market could not glean on its own.

Interestingly, Flannery, Kwan, and Nimalendran revisit the issue of bank opacity in the context of the panic in this recent paper. They find that their proxies for bank opacity, based on equity trading patterns, increased dramatically during the crisis, implying that banks became more opaque during the panic even if they were not more opaque in ordinary times. The authors conclude that the stress test provided new information to the market and succeeded in fostering financial stability.

Posted by Blog Author at 10:00:00 AM in Expectations, Financial Institutions, Household Finance