« Just Released: Household Debt and Credit Developments in the Nation and the Region in 2011:Q1 | Main | Why Are Adjustable Rate Mortgages So Rare These Days? »

The Great Recession and Recovery in the Tri-State Region

In 2008, as the financial crisis unfolded and the U.S. economy tumbled into a sharp recession, the outlook for the tri-state region (New York, New Jersey, and Connecticut) and especially New York City—the heart of the nation's financial industry—looked grim. Regional economists feared an economic downturn as harsh as the one in 2001, or the even deeper recession of the early 1990s. Now, as the recovery takes hold, we can report that although the economic downturn was severe in the region, with the unemployment rate surging above 9 percent in many places, it was less severe than many had anticipated. This post—which is based on the New York Fed’s May 6 Regional Economic Press Briefing—recaps how the Great Recession affected employment across the region, how the ensuing recovery has progressed, and what the prospects are for job growth as we go forward.

The New York Fed produces indexes of economic activity for New York State, New York City, and New Jersey so that we can monitor local economic activity and growth on a real-time basis and identify when recessions begin and end in the region. These measures indicate that New Jersey's downturn began around the same time as the nation's—in late 2007—while the downturn in New York State and New York City did not start until a few months later, during the spring of 2008.

As 2008 began, parts of the region started seeing job losses, in line with the nation (see chart below). New York City, like much of the state, continued to add jobs for a number of months after the national recession started. But by April 2008, with a financial crisis developing, employment began to fall in New York City too. The area's steepest job losses began in September of that year, when Lehman Brothers went into bankruptcy and other financial institutions were faltering. From peak to trough, employment fell by roughly 140,000 (a little less than 4 percent of the pre-recession total)—a steep drop, to be sure, but not as severe as during the downturns of the early 2000s or early 1990s. Moreover, the job losses were not as severe locally as they were nationally (6.3 percent). Across the rest of New York State—Long Island, the Lower Hudson Valley, and upstate—job losses were somewhat steeper (see map below), but still not on par with those in other parts of the nation. 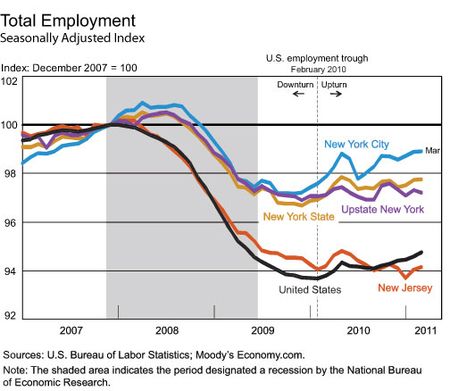 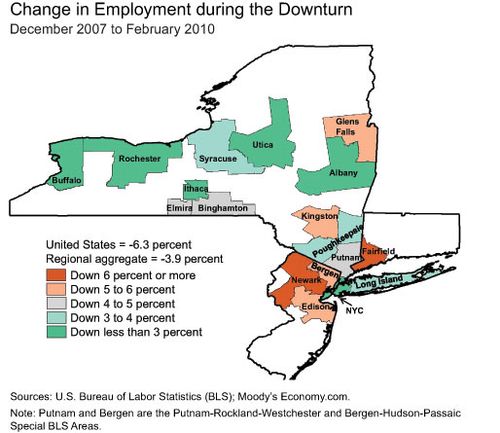 Other parts of the region did not fare quite as well. Job losses in northern New Jersey and Fairfield County, Connecticut, were generally comparable with those in the nation, though no worse than during the region’s downturn in the early 1990s.

Not only did the severity of the downturn vary across the parts of the region, it also varied substantially by sector. As in past downturns, education and health services continued to add jobs. Government did not see any significant job losses during the downturn, and leisure and hospitality also held up well in many parts of the region. In contrast, the manufacturing and construction sectors saw the heaviest job losses. Overall, these two highly cyclical sectors employ a relatively small share of workers in the tri-state area. There were also sizable job losses in professional and business services, a key sector here. New York City’s financial sector also sustained fairly steep job losses, although not as sharp as in the prior two recessions. 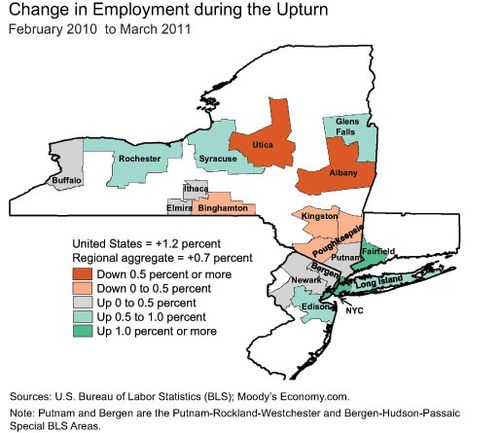 The sector that showed the most strength during the national employment downturn—education and health services—has remained one of the strongest sources of job creation since the upturn began last February. However, two sectors that were hard-hit during the downturn—professional and business services and financial activities—have also contributed significantly to job growth during the recovery.

So which sectors have been holding back growth? The construction and manufacturing sectors have yet to see job increases, although the pace of job loss has moderated substantially. But the greatest drag on employment during the recovery, by far, has come from state and local government—especially in New Jersey, where steep cutbacks in government jobs largely explain why the state has lagged the rest of the region during the recovery.

Across the tri-state region, joblessness is still very high, even though it has begun to decline as the recovery takes hold. The strength of the jobs recovery in the region will hinge on the extent to which job creation in the private service sector overcomes the dampening effects of cuts in state and local government spending and jobs.

The good news for the overall employment outlook is that private sector industries have been adding jobs. In one key example, the New York City securities industry, which had been uncharacteristically slow to rebound, has finally begun to show fairly brisk job gains over the past year (see our previous post on this). This industry typically leads trends in New York City employment and is a major source of tax revenue for both the city and the state.

Together, professional and business services, health and education services, financial activities, and leisure and hospitality account for roughly half of total employment in the region. Thus, even moderate job gains in these large sectors should be sufficient to more than offset job losses in state and local government, which represents roughly a sixth of total employment. While a credible plan for medium-term fiscal consolidation may be necessary and desirable, it could pose challenges for the near-term outlook. State budgets for the coming fiscal year suggest that further government job cuts may be in store for New York State. And it remains to be seen if most of the public sector job losses in New Jersey are behind us.

The bottom line is that the Great Recession was less severe in much of the tri-state area than in much of the nation. While most parts of the region are now recovering jobs, some areas are lagging and the pace is likely to be slower than we would like.

We invite you to submit comments on the path of the recession and recovery in the region. If you would like to learn more about the region’s employment trends, see the materials available on the Regional Economic Press Briefing webpage.


Disclaimer
The views expressed in this post are those of the author(s) and do not necessarily reflect the position of the Federal Reserve Bank of New York or the Federal Reserve System. Any errors or omissions are the responsibility of the author(s).
Posted by Blog Author at 10:01:00 AM in Employment, Financial Markets, Great Recession, New Jersey, New York, New York City, Recession