How Well Do Financial Markets Separate News from Noise? Evidence from an Internet Blooper

How efficiently do financial markets process news of unexpected events? This question becomes particularly salient now, as multiple events across the globe drive market movements. Do these gyrations reflect responses to fundamental news or to “noise”? In general, it is very difficult to discern how well markets process information, because there is no objective way for observers to separate fundamental news from noise components when markets react to a news report. In this post, however, we examine an unusual episode involving a false news report that provides a unique look into this question. We find that even when noise can be clearly identified, markets may take as long as a week to fully process the “signal,” or relevant information, component of news.

On September 8, 2008, a six-year-old article about the 2002 bankruptcy of United Airlines’ parent company resurfaced on the Internet and was mistakenly believed to be reporting a new bankruptcy filing by the company. This episode caused the company’s stock price to drop by as much as 76 percent in just a few minutes, before NASDAQ halted trading. After the “news” had been identified as false, the stock price rebounded, but still ended the day 11.2 percent below the previous close. Trading volumes skyrocketed during these extreme price movements. In subsequent days, the stock traded as much as 17 percent below its September 8 closing price, and on September 15 it finally traded above the price level seen just before the false news impacted the market.

We study this episode in detail in our New York Fed staff report. In the paper, we use a simple model to estimate what would have happened to the stock price of United Airlines had the false news never hit the wires. Our model relates the excess returns on United Airlines’ stock to the excess returns of the stock market as a whole (as proxied by the S&P 500 index), of the airline industry (as proxied by Bloomberg’s World Airline Index), and of crude oil. We use this model and the realized paths of the three proxies observed in the days following the episode to generate a counterfactual stock price path. This counterfactual price path allows us to study the amount of time it took for the effects of the false news shock to dissipate.

Our main findings are depicted in the chart below. It shows that after three trading sessions, United Airlines’ stock was still trading significantly below the counterfactual level implied by our model. Only on the seventh day after the episode did the stock trade at levels consistent with the absence of any residual effects attributable to the false news shock. 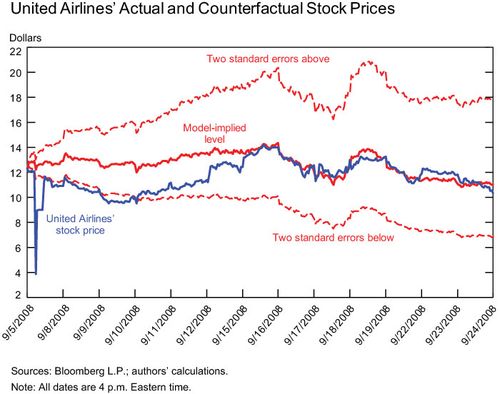 We also study the impact of the false news shock on the stock prices of other major airlines (American, Continental, Delta, and U.S. Airways). We find a very similar, although attenuated, pattern. On September 8, 2008, the share prices of these airlines experienced maximum declines in the range of -25.6 percent to -31.8 percent, and ended the day between -2.5 percent and -5.3 percent relative to the previous closing prices. The timing of the sharp price moves coincides with that of United Airlines. For this part of our analysis, we employ the same type of model we use for United Airlines, and construct a counterfactual path for the stock price of each of the four airlines. We find that the effects of the false news shock originating from the report on United Airlines were equally persistent. To give an example, the chart below shows the actual path of American Airlines’ stock price along with the counterfactual level as well as the confidence bands implied by our model. As we see, it took approximately the same amount of time for American’s stock price to revert to the counterfactual level implied by our model. 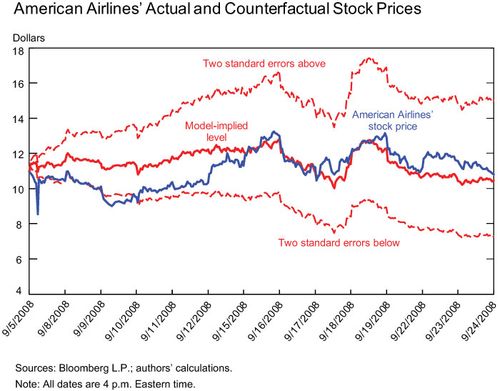 In short, we find that even in a situation where noise could be clearly singled out, it took markets about a week to fully process the signal component of news. Of course, in most circumstances, signal and noise arise simultaneously and cannot be separated so easily. Thus, normal delays may be longer than what we detect here.

Is a week a long time or not? It certainly is when the delay pertains to the reaction of asset prices to a piece of news. Most likely it isn’t when it comes to investment decisions of companies or industries. The key question is whether normal information delays are long and pervasive enough to affect those investment decisions. If they are, such delays could be costly for the economy.

Why did it take so long for the information to be processed? Our staff report investigates several potential explanations, but fails to find empirical evidence supporting any of them. In particular, explanations based on poor trading liquidity after the false news event, potential links to the financial market turmoil in September 2008, and uncertainty aversion by investors do not appear to be supported by the data. We therefore have to leave this question unanswered.


*Carlos Carvalho is an associate professor of economics at PUC-Rio; Nicholas Klagge is a financial/economic analyst in the Federal Reserve Bank of New York’s Credit and Payments Risk Group.