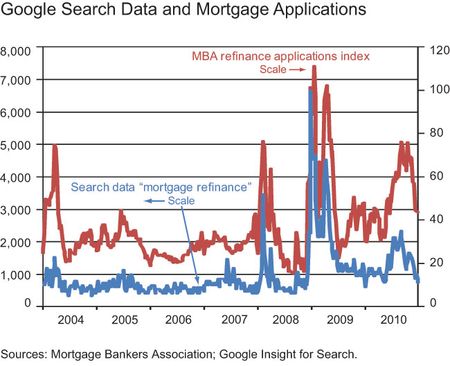 Many thanks to those who took the time to give comments.

It is interesting to read that more precise search engine data can provide more “resolution” in order to forecast financial markets.

Here’s a link to the Mao, Counts and Bollen (2011) paper mentioned, which finds predictive value in search data for stock markets:
http://arxiv.org/abs/1112.1051

Regarding the request for the underlying data presented in the analysis, please see the following links:

US Interest rate data and a wealth of other economic and financial data can be downloaded from the Federal Reserve Bank of St. Louis:
http://research.stlouisfed.org/fred2/

The MBA charges a subscription fee for access to its Weekly Application Survey:
http://www.mbaa.org/ResearchandForecasts/ProductsandSurveys/WeeklyApplicationSurvey

The close correlation between Google search data and actual mortgage applications is fascinating. Great article and thank you for the related reading list.
In our research we also found that aggregated Google Trends data does not have sufficient "resolution" to predict equity, commodity or forex markets. However, real-time "raw" search engine data that includes geo information, precise timestamps and several other data elements can contain predictive signals for those markets. In December of 2011 Mao / Counts / Bollen published a recommended paper on this topic.