Prospects for the U.S. Labor Market

The unemployment rate in the United States fell from 9.1 percent in the summer of 2011 to 8.3 percent in February. This decline, the largest six-month drop in the unemployment rate since 1984, has surprised many economic forecasters. The decline is even more surprising because recent real GDP growth appears to have been around trend at best, whereas in early 1984, growth was more than 7 percent. Our next six posts in Liberty Street Economics will discuss prospects for the U.S. labor market given this surprisingly quick decline in the unemployment rate. In this opening post, we outline some of the themes examined in this series and provide a brief summary of our conclusions. But first we develop a simple framework to place the unemployment rate in context with the rest of the labor market.

The Framework
The relationship of and flows between unemployment, employment, and labor force participation will be at the center of our discussion. Often, discussion of employment focuses on the number of jobs added each month, as measured by the payroll employment change; for example, see this recent post in the Atlanta Fed's macroblog. A different but very much related measure is the number of employees relative to the working-age population, known as the employment-to-population ratio. Even though it receives less attention, this measure is more closely related to overall economic growth relative to trend than is the payroll employment change. For example, consistent with recent GDP growth being around trend, the employment-to-population ratio has risen modestly over the past six months. In contrast, in the early 1984 episode, the employment-to-population ratio increased much more robustly as the unemployment rate declined, thus providing considerable impetus to growth.

To clarify the relationship of unemployment, employment, and labor force participation, we need a little math. First, we can express the employment-to-population ratio as

We then construct a decomposition of labor market changes by taking the logarithmic changes in the employment-to-population ratio (recall that the log of the product is the sum of the logs):

The first figure shows how these three labor market variables evolved over the four post-1973 business cycles (excluding the short 1980 cycle), along with developments in the Great Recession and current recovery. We start at the lowest level of the unemployment rate before the recession and then follow the changes for three years after the rate reaches its maximum level. For the current expansion, the maximum unemployment rate occurred in October 2009.

Upcoming Posts in the Series
The next five posts in this series will address the following questions: 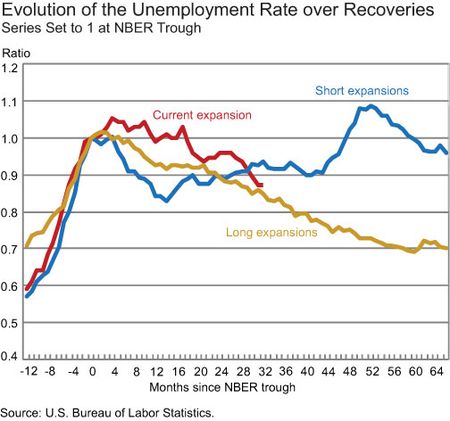 Many economists use Okun’s law to predict unemployment using forecasts for GDP. According to this “law,” substantial declines in the unemployment rate require above-potential economic growth. However, one implication of the unemployment path in long expansions is that the absence of a recession is more important than above-trend growth. In the second post, co-authored with Ging Cee Ng, we find substantial evidence for this point, especially in the two most recent expansions.

In the third post, Ayşegül Şahin and Christina Patterson examine how labor market flows, particularly outflows from unemployment, dominate the short-run dynamics of the unemployment rate. The outflows from unemployment can be either to nonparticipation or to employment. They find that much of the decline in the unemployment rate since October 2009 can be predicted by the outflow rate to nonparticipation in the labor force and by improvements in the outflow rate to employment. They use the pattern of improvement in previous long expansions to show that despite current low levels of flows in the labor market, the unemployment rate will continue to decline if there is a recurrence of this pattern. Indeed, the rate of decline will be quicker than the average rate of decline for long expansions.

A different type of structural change came about from the entry of married women into the labor force from the 1960s to the 1990s. This long-term trend started to reverse in the late 1990s. In the fifth post, Stefania Albanesi, Ayşegül Şahin, and Joshua Abel examine how much of the recent decline in female labor force participation is structural and how much is cyclical—a difficult issue. Although the authors do not reach definite conclusions on that particular issue, they do find that many of the recent differences in the dynamics of the unemployment rate and of the employment-to-population ratio can be traced to women dropping out of the labor force. Since many of these female “dropouts” are highly educated, understanding the reasons for the decline in participation is crucial for a wide range of economic policies.

In the final post, co-authored with Ayşegül Şahin, we bring the analysis together to examine the implications of a very long expansion for the unemployment rate. We find that although the unemployment rate was more than 2 percentage points higher at the start of the current expansion than at the beginning of the 1990s expansion, it would decline to less than 5 percent in 2017 if labor market flows improve in a manner similar to the 1990s. This projection can be contrasted with recent Blue Chip long-run consensus forecasts that assume positive GDP growth through 2023 but project that the unemployment rate will not dip below 6 percent until 2018 and will not go below 5.5 percent.

The flat employment rate today is a cause of concern. Something needs to be done about it. The private sector should take the lead.

For those of you who are too young to remember the 1970s it was horrible. Wage and price controls meant that wages basically stayed flat and prices went up. You had to switch employers to get ahead financially. If you worked hard, get an education and adapted to changing conditions, you could succeed. Church and family reinforced those values. Whole areas of the country adapted and changed, e.g. the rust belt.

The flat line of employment to population today should be a major concern. While the baby boomers are retiring, they are being replaced by the millenial generation of even greater numbers. In the 1970s it took eight to ten years to figure out that government was not the answer to the economy's problems. We're six years and counting now of government supplying failed solutions. Let's hope we wake up soon.