The Bathtub Model of Unemployment: The Importance of Labor Market Flow Dynamics

An alternative to Okun’s law to understand unemployment dynamics is to examine the evolution of the unemployment inflow and outflow rates. (For more on Okun’s law, see yesterday’s post.) A useful analogy is a bathtub: we can think of the unemployment rate (a stock) as the amount of water in a bathtub. Changes in the amount of water in the tub are determined by the rate at which water pours into the tub relative to the rate at which it drains out. For example, if the inflow of water is equal to the outflow, the amount of water in the tub remains constant. But if the rate of water flow into the tub is suddenly increased by turning the faucet to its maximum level, then the water level rises rapidly. A similar dynamic occurs in the stock of unemployed workers when there is a rapid increase in job losses during a recession. In this post, we focus on the flow dynamics in an economic recovery to help understand how the unemployment rate may evolve.


This identity tells us that the change in the unemployment rate is given by the difference between inflows into unemployment and outflows from unemployment. In this post, we do not distinguish between inflows caused by job separations and entry/re-entry into the labor market or between outflows caused by job finding and leaving the labor force. Thus, we abstract for the moment from the labor force participation margin, but we will return to this crucial margin in later posts.

Since 1990, the Bureau of Labor Statistics has estimated labor market flows between employment, unemployment, and “out of the labor force” (nonparticipation). However, because we focus only on the total outflow and inflow rates and want to consider the entire postwar period, we use a method attributed to Shimer (2005) that relies only on characteristics of the level and duration of unemployment. The chart below shows the path of the inflow and outflow rates produced by this method. The inflow rate st (measured on the right axis) spiked up during the recession but has mostly subsided recently. The outflow rate ft (measured on the left axis) reached its lowest level since 1972 during the 2007-09 recession and, despite recent improvements, still stands far below its pre-recession levels. 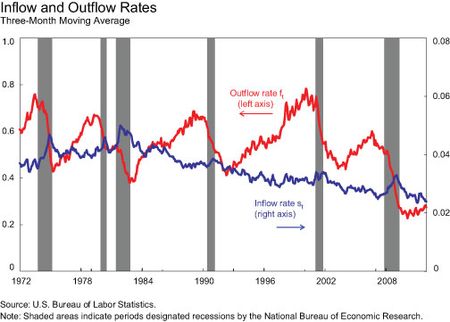 The flow-consistent unemployment rate is defined as

A key question is whether this most recent deviation is a clear signal of a further decline in the unemployment rate. The answer depends on whether the behavior of the inflow and outflow rates will be different going forward.

To demonstrate how the improvement in flow rates—especially the outflow rate—can bring down the unemployment rate, we construct a hypothetical unemployment rate path under three scenarios. In these scenarios, we assume the inflow and outflow rates change at the same rate as in the recoveries following the 1981-82, 1990-91, and 2001 recessions. We start the simulations two-and-a-half years from the official NBER trough to ensure that we are comparing similar points of the business cycle. (This simulation is similar to Daly, Hobijn, and Kwok’s simulation computed in 2009 to assess how high the unemployment rate was likely to go.) The next chart shows the hypothetical inflow and outflow rates in the three scenarios. Although the decrease in the inflow rate contributes to the decline, the main driver of the decline in the unemployment rate in these scenarios is the improvement in the outflow rate. It is important to note that in all of these scenarios, the increase in the outflow rate is modest: it rises from 25 percent to around 33-34 percent, compared with a peak before the Great Recession of about 60 percent. One concern about these simulations is that with the inflow rate already at very low levels, it may not fall as implied in the simulation. However, even if the inflow rate stays at its current level of 2.3 percent, the outflow rate would only have to rise to 37 percent for the unemployment rate to be at 6 percent by the end of 2014. *Christina Patterson is a research associate in the Research and Statistics Group.

Posted by Blog Author at 07:00:00 AM in Labor Economics, Macroecon, Unemployment

That's a great study. People should really move their feet, and find a job. It's not easy to live in this world without having resources.

This is exactly the methodology invented at MIT in the late 1950s by Jay W Forrester. He termed it industrial dynamics. It is now termed system dynamics. Please see www.systemdynamics.org for more information.
This method, sometimes termed 'bathtub' dynamics, has been widely used to look at climate change recently and to look at literally hundreds of systems where feedback and time delays are important.
John Sterman at MIT has also shown that well educated persons have a difficult time of what is essentially in calculus, integration, when presented with these kinds of problems: rates and accumulation in stocks. Even more so when delay is involved.
BTW there are many software packages that implement the system dynamics methodology that would make the mathematics more tractable. In addition they would permit the model to get more complex but perhaps that is the wrong path to take.

Is there a musical chairs going on in the job market. Every month in your bath tub about 5 MM come in and about 5.2 MM go out of the bathtub. Currently there are about 14 MM people in the bath tub, so next month there will be 19 MM however 5.2 will go out leaving behind 13.8 MM. so the number of people in bath tub will depending on how many are coming in and how many are going out. In a year about 60 MM people come in, that is lot of people, about half the working population, that means an employee changes job every 2 years. Well we all know that you and I don’t change job every two years, so some people come many times in the year in this bath tub.
This is because? Employers have lot of choice and get rid of people every now and then or there is lot of seasonal jobs or there are lots of jobs in which skill sets can be easily acquired therefore employees can leave or fired and some other person can be hired back again. This to be sounds neither cyclical or structural.

However for the people left in the bath tub for more than 1 year, it may be structural and their job skills are no longer required. Don’t know how many people are like that.

Continued….
So probably what is happening is that barring some 1MM (estimate) who really want job and don’t have job, most people who get unemployed are able to find job within one year. Drop in the labor participation is by people, who really don’t need extra money. If job is readily available they will work, if there is hassle to find job, it is not worth looking. These people have sufficient income either from significant other or from their own savings.

I am not an economist however if I look all over the world over a period of time, most of the time growth in jobs in the country were not due to monetary policy. Take a look at Germany- their growth is due to increase in export in Emerging market. Brazil- they discovered oil fields in ocean and growth in their commodity business as China grew. Growth in china occurred as they decided to invest in infrastructure and they have cheap labour and multinational companies were able to exploit it, even in US in 1990s it was due to tech investment and increase in productivity, in 2000 it was due to Euphoria created by declining lending standards. In India it happened due to growth in BPO.

I have not seen any survey of who these long term unemployed are like their age, gender and skill set. That may help in determining if something can be done to help these people and reduce the unemployment and the mood in the country.

If I take a look at the number of people claiming unemployment claims, it has gone from about 3MM pre recession to 12 MM and now it is about 7 MM. Implying that 5 MM have got job. So these 5MM represents the outflow.
Take a look at the unemployment claims for EUC (long term benefits) http://www.oui.doleta.gov/unemploy/euc.asp that number has been declining. Therefore either they have got jobs or have dropped from labor pool. The peak was about 4 MM and now it is 2.8MM

Additionally if I look at the distribution of the age group of the people claiming unemployment Majority of them is below the age of 50. If the percentage of people were much higher in the age of 50 or 60 then one of the reasons in the drop in the outflows could have that older people were laid off in higher proportion are not able to find jobs and hence they have dropped out of the labor people. But this does not seem to be the case.

Young people college graduates or high school graduates represents the inflow. Even though I hear that they are having difficulty finding jobs, they have student loans and have to repay them.

It would be helpful to me if you can give me the units for the inflow rate and the outflow rate since the stock is a rate and therefore the inflows and outflows must be a rate over a time period.

If my thinking is correct, then an increase in the labor force from non-participation if the rate is faster than new employment would result in an increase in the unemployment rate even though the employment picture is getting better. This may be a plausible dynamic if the long term unemployed become encouraged by the prospects of a growing economy.

Thanks guys for fixing the errors. The simple analogy of the bathtub gives me the shivers, honestly.

first, how much of the flows are nonparticipation (6% UE would not been seen as a success with low participation).

Second, what variables drive flows (housing will be slower this time, state govts are still contracting unlike previous recessions). predicting the future from the past is tricky business.

So to get back to the connection with Okun's Law - what is the statistical correlation between the outflow rate and the rate of growth of GDP? Does the bathtub model give us a better estimate of the consequences for unemployment of say 2% growth versus 3% versus 4%?

We also recognized the transcription error in the table and have subsequently revised it so that the correct numbers are now reported.

Some of the numbers in the "Historical Unemployment Rate Dynamics" table seem off (for instance, the third column does not exactly correspond to the difference between the first 2 columns). That could be rounding, but also the sign of the number in the third column seems to be wrong in most instances (it is correct for June 1983).