« Historical Echoes: The Symbolism of the Bull and the Bear | Main | Is Wall Street the Only Street in New York City? »

Is the 2005 Bankruptcy Reform Working?

While the name of the Bankruptcy Abuse Prevention and Consumer Protection Act suggests two goals, BAPCPA seemed to be more about abuse prevention than consumer protection. The abuse alleged by proponents of BAPCPA, particularly credit card lenders, was that filers were using Chapter 7 bankruptcy to avoid paying credit card debt they could afford to pay. BAPCPA aimed to curb the alleged abuse through a variety of obstacles, most notably a means test intended to divert better off filers from Chapter 7, where credit card and other unsecured debts are discharged (forgiven), to Chapter 13, where unsecured debts may be rescheduled. In this post, I investigate whether BAPCPA is working, where by “working” I mean reducing the overall bankruptcy rate, and reducing that ratio of Chapter 7-to-Chapter 13 filings. Some observers have argued that the reform failed on both counts, but my analysis suggests that conclusion may be only half right.


What BAPCPA Changed
BAPCPA increased the cost of filing for bankruptcy and reduced the benefit, which is protection from creditors. With a slight abuse of language, one could say it reduced the “supply” of bankruptcy protection along a number of dimensions. First, it raised filing fees; the GAO estimated that BAPCPA increased the average cost of filing Chapter 7 from $712 to $1,078, a 51 percent increase. This post on VoxEU.org argues that raising filing costs may lower welfare for liquidity constrained filers who might need bankruptcy protection the most. Beyond higher filing fees, BAPCPA imposed stricter documentation requirements, limited access to home equity exemptions (which determine how much of their home equity filers get to protect from creditors), limited cramdown of auto loans (so owners of underwater autos are less able to have the underwater part discharged), and most importantly, required a means test. Under the means test, filers whose average monthly income (adjusted for family size) over the previous six months exceeds the median income for their state are not eligible for Chapter 7 and discharge of their unsecured debt; if they file at all, they must file under Chapter 13 where they may have to reschedule their unsecured debt.


Did BAPCPA Reduce the Bankruptcy Rate?
To investigate that question, I start by simply plotting the bankruptcy rate per 1,000 households. The chart below reveals three things. First, there was a notable upward trend in the bankruptcy rate before BAPCPA. Indeed, it was partly this upward trend in filings that motivated the reform. Second, it shows the much noted rush to file between April 2005, when BAPCPA was signed into law, and October 2005, when it took effect. 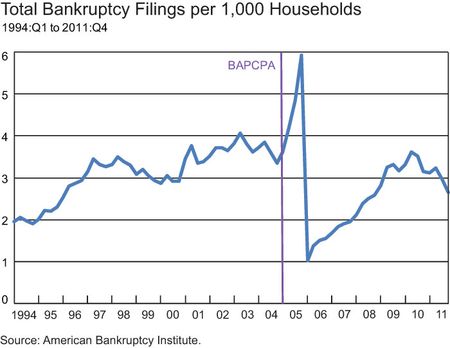 To determine if BAPCPA reduced the bankruptcy rate relative to the rate one would predict absent BAPCPA, I estimated a regression model relating the bankruptcy rate to four variables: real disposable income per capita, the unemployment rate, the debt service burden (payments on mortgage and consumer debt per disposable income), and a trend. I also included quarterly indicator variables to capture any seasonal patterns in filings. I estimated the model using data from 1994:Q1 to 2005:Q1, so the estimation period ended just before BAPCPA was signed and the rush to file began. Importantly, I am assuming that the upward trend in filings before 2005:Q1 was not driven by anticipation of BAPCPA’s passage.

The main results (I don’t report the quarterly effects) below indicate that filings are significantly, negatively related to income, a sensible result. There is—or was—a significant upward trend in filings. In fact, the trend is as statistically significant as any other variable in the model. This paper from the St. Louis Fed also finds that upward trend in bankruptcy filings matters more than cyclical factors. Curiously, filings are not significantly related to the debt service burden and, even more curiously, they are negatively related to the unemployment rate. It’s not unusual for analysts to find that filings and unemployment are unrelated (see link above), but a negative relationship is puzzling. Despite that puzzle, the overall fit of the model is good; the R2 is 82 percent, meaning the model explains 82 percent of the variation in the filing rate. 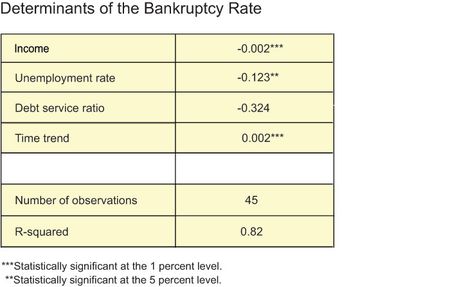 Below I plot the actual filing rate, the rate predicted by the model, and two standard error bands. The forecast and standard error bands end in 2011:Q3, the last quarter the debt service ratio is available. The fit of the model pre-BAPCPA is pretty good, primarily because the model captures the upward trend that is the defining movement in the series. 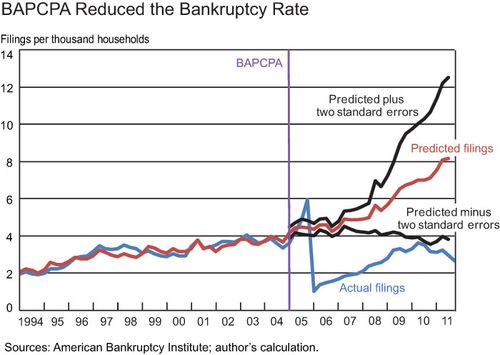 More to the point, actual filings are below the two standard error confidence band, implying BAPCPA (or something else that happened in the post-BAPCPA period) significantly reduced the bankruptcy rate relative to the rate one would predict given cyclical factors and the trend in filings. The forecast error is substantial. The actual filing rate in 2011:Q2 was three per 1,000 households, while the predicted rate was 8.2 per 1,000 households, a forecast error of
Posted by Blog Author at 07:02:00 AM in Forecasting, Household Finance, Unemployment

One possible explanation of the unemployment phenomenon is that unemployment tends to reduce the gain from pursuing collections. No job, no money in the bank, an old car and an underwater mortgage make for an unlikely payoff to collections.

Thanks for all your comments.

In response to Jeff: Agreed that it would be interesting to include a measure of the supply of unsecured credit but identifying a pure measure of supply (as opposed to supply and demand) is tricky (especially for a blog post). For example, I could add the volume of credit card loans at banks but that would reflect the confluence of supply and demand. Further, the measure I do use—debt burden—at least partly reflects supply. Still on the same comment: I agree that collection efforts by debt collectors—law suits, wage garnishment, harassing phone calls—will surely affect bankruptcy filings since bankruptcy stays such actions. However, while differences in collection efforts and powers across states may explain differences in filings rates across states, it is less clear (to me) that a trend toward more aggressive collection efforts explains the national trend in filing rates.

In response to James: While in some ways it might be preferable to use income for the bottom x percentile, bankruptcy is no longer just a lower (or lower middle) income phenomenon. Elizabeth Warren’s research (with others) has shown that middle class households are increasingly likely to file. Given that, I don’t think per capita income is a bad proxy for economic conditions.

In response to the second point by James: Agreed that if losses given default (bankruptcy) have increased, providing unsecured credit could have become riskier despite the reform. I am agnostic on whether losses given bankruptcy have risen.

Thanks again for your comments.

For the unemployment rate issue, do any lags work? People have to deplete some nest egg prior to declaring bankruptcy, so I could see a plausible explanation for that.

With record low interest rates, credit card interest still remains high. Since the current Administration in DC will no doubt be engulfed with lawyers fees defending themselves, the law should be put back to where it was.

Interesting. In the past, I have thought that increasing rates of bankruptcy filing were linked to increasingly irresponsible behavior on the lending side (the supply creates the demand). Maybe your regression model should have a variable for supply of unsecured credit. That might explain why the bankruptcy filing contracts later on (because credit card lending contacts due to write-offs, etc.).

Also, I would want to know if the intensity of collection effort is not behind the trend in rising (and later contracting) filing rates. By intensity of collection I mean, are the lenders suing the borrowers more or less. I would think that being sued would be the major factor behind a filing. I take this from studies of bk filings that show that were lenders have more legal options (such as garnishing wages), the bk rate is higher).

If chapter 7 filers are not representative of the overall population, it may make sense to use somewhat more precise data. So instead of using real disposable income per capita, you could use real disposable income per capita accruing to the bottom x% of the population (and likewise for the unemployment rate and the debt service ratio). But either way, aggregated data may miss regional or sectoral differences that might explain some of the counter-intuitive results.

It also may be the case that the number of petitions has decreased but the average amount of debt discharged per debtor has increased, in which case it is (theoretically) possible that it has become riskier to extend unsecured credit.

Finally, while it would arguably be good if bankruptcy reform increased the availability of unsecured credit, in part BAPCPA reflected a moral judgment about who deserves the "fresh start" of personal bankruptcy. One explanation of the data may be that norms against bankruptcy were eroding, and that abusive filings were becoming more common. BAPCPA may have either strengthened the norms or it may be a substitute for those norms (if community norms don't punish people for abusive filings, then we need something like a median-income formula to filter out abusive filers). One may prefer loose, informal norms to a rigid (and administratively burdensome) formula, but it may be that the norms were unsustainable for some reason.