Location, Location, and Pacification: The Effect of Crime Reduction on Residential Property Value

In this post, we document the relationship between crime and house prices in the city of Rio de Janeiro, Brazil. One fully expects crime, as a public “bad,” to exert a downward force on prices; indeed, this is a common finding in the literature on amenity valuation. Our recent study quantifying this relationship is novel in its: (i) use of extremely detailed property price data for a large number of neighborhoods, (ii) application to a developing economy, and (iii) examination of the link between crime and reduced house-price inequality. We focus on the extent to which prices are responsive to crime-related outcomes, as demonstrated by a recent policy experiment and with the use of detailed offer-price data from the online classified website ZAP (www.ZAP.com.br). We find that prices are quite sensitive to falling crime, which implies large welfare gains due to crime reduction.

Since there are many different factors that can affect house prices simultaneously, we study the housing market around the time of a specific policy event tightly linked to the objective of crime reduction. This event is the introduction of the Unidade Pacificadora da Policia (“Pacifying Police Unit,” or UPP) program in Rio, beginning in late 2008. As in many cities in developing countries, a significant fraction of the population of Rio live in very low-income communities with a high concentration of substandard, informal housing; in Rio, these communities are called favelas.

Over the past three decades, the city has been plagued by conflicts with drug gangs and militias over territory in its favelas, with many favelas effectively being occupied and governed by the drug gangs. In response, the UPP program re-occupies specific favelas by force using elite police units, drives out the gangs and roots out caches of weapons and drugs, and then installs permanent police stations staffed by highly trained, well-paid, newly recruited officers; eighteen such stations have been installed since 2008. The basic objective of re-occupation is the renewed assertion of the rule of law and abatement of gang-related crimes.

Using detailed monthly data on residential property prices in Rio’s formal housing market, as well as on homicide and robbery rates in each of Rio’s neighborhoods, we formally test the hypotheses that neighborhoods closer to a UPP station experienced larger-than-average decreases in crime and larger-than-average increases in house prices after the UPP was put into place. We also exploit the staggered timing of the policy across the individual UPPs by estimating the effect of each one on house prices and crime. We find that, for properties close to a UPP, house and apartment prices increased by an average of 5 to 10 percent, homicides decreased by an average of 10 to 25 percent, and robberies decreased by an average of roughly 10 to 20 percent.

To gain perspective on the economic significance of the decrease in crime due to the UPPs, we use our regression results to construct counterfactual price and crime rates and, in addition, citywide statistics. The idea is to subtract out the effect of the UPPs in nearby neighborhoods and then combine these statistics with those of more distant neighborhoods to compute average prices and crime rates for the city as a whole. One can then compare the actual changes in house prices and crime rates over time to the counterfactual series, which estimates the same statistics in the absence of the policy.

The average actual price level for house and apartment sales in the city of Rio is illustrated in the chart below. The price level rose approximately 100 percent between January 2008 and August 2011. In the absence of the UPPs, the overall house-price index in Rio would have grown by 15 percent less, illustrated by the dotted line. We note that since we do not observe house prices inside the favelas themselves, our estimated price effects are quite likely to be underestimates of the true citywide effects of the policy. 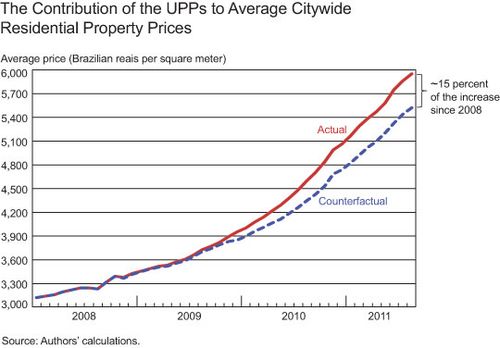 A similar exercise for the homicide rate is shown below. This time, the actual series lies below the counterfactual series since the UPPs reduced the amount of crime. The graph shows that the UPPs were not the dominant factor in determining the rate of homicides at the city level, as the counterfactuals track the actual series quite closely. That said, by the end of the sample, the average counterfactual simulation indicated a contribution by the UPPs of 14 percent of the decline in homicides since their peak in May 2009. This translates into about one homicide per 100,000 people annually, or roughly sixty people in the municipality of Rio in 2011. By any measure, this is a substantial number of lives that potentially can be credited to improved security. In a similar manner, 20 percent of the reduction in robberies since 2009 can be attributed to the establishment of the UPPs. These results, in tandem with those on house prices, suggest that the general welfare implications of the UPP policy are quite large. 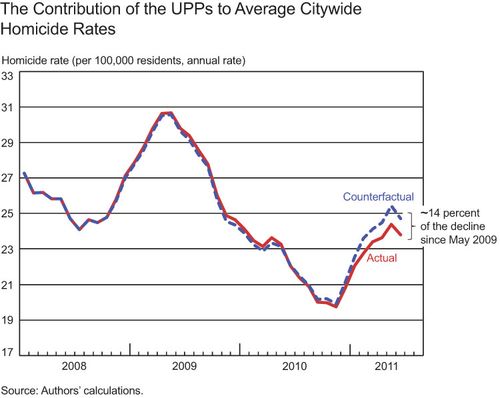 We also use the estimated counterfactual property prices to see whether the level of house-price inequality across neighborhoods was affected by the decrease in crime. This would happen, for example, if lower valued properties appreciate or depreciate disproportionately to a given change in the crime rate. A common measure of inequality is the Gini coefficient, which we apply to neighborhood apartment prices. The falling Gini coefficient for actual prices, illustrated below, indicates decreasing inequality over time, and the fact that the counterfactual Gini lies above the actual implies that the UPPs contributed to this decline. Our estimates imply that the UPPs contributed to roughly 45 percent of the decline. The distribution of property prices is closely related to the distribution of wealth, since residential home value constitutes a large part of a household’s assets, particularly for lower income families. Therefore, the results suggest a novel and potentially important channel by which policy can contribute to changes in the distribution of wealth. *Claudio Frischtak is head of the Rio-based consulting company Inter.B, a country director at the International Growth Centre, and a member of the TT-20 Group at the Brookings Institution.