« The Role of Bank Credit Enhancements in Securitization | Main | Peeling the Onion: A Structural View of U.S. Bank Holding Companies »

The Dominant Role of Banks in Asset Securitization

As the previous posts have discussed, financial intermediation has evolved over the last few decades toward shadow banking. With that evolution, the traditional roles of banks as intermediaries between savers and borrowers are increasingly performed by more specialized entities involved in asset securitization. In this post, we summarize our published contribution to the series, in which we provide a comprehensive quantitative mapping of the primary roles in securitization. We document that banks were responsible for the majority of these activities. Their dominance indicates that the modern securitization-based system of financial intermediation is less “shadowy” than previously considered.

As discussed in the introductory post published on July 16, asset securitization redistributes the traditional role of a bank into several specialized functions, as shown in the role-based map below. Using a comprehensive securitization database that includes all nonagency asset-backed securities (ABS) from 1978 to 2008, we examine the magnitude of bank participation in four of the primary securitization roles: issuer, underwriter, servicer, and trustee.

Issuers
The first step in securitization is issuance, the process of assembling the underlying collateral and creating the asset-backed security. The issuer pools and sells these assets to an external legal entity, often referred to as a special-purpose vehicle. As the table below shows, banks account for a sizable, and in some cases dominant, share of the issuer role across most asset classes. There’s usually a close link between the role of issuer and lender, with these functions often overlapping. Indeed, we see from the table that consumer finance lenders, and to a lesser extent retail commercial banks, dominate auto ABS issuances. Similarly, credit card ABS originations are dominated by banks, which account for 93.9 percent of issues. Banks, investment banks, and mortgage lenders have sponsored most mortgage-backed-security (MBS) and home equity issues, while banks and investment banks dominate commercial-mortgage-backed-security (CMBS) originations, with a combined market share of more than 83 percent. Likewise, the private-label market, encompassing all prime nonconforming and Alt-A mortgage products, is dominated by banks. 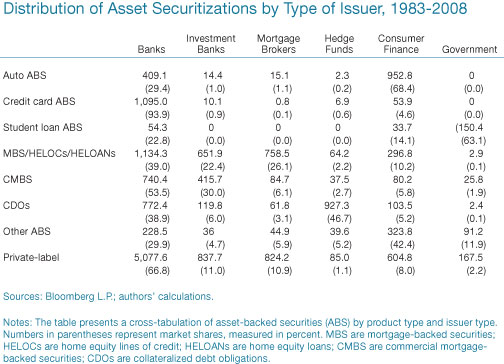 Collateralized debt obligations (CDOs) are among the most intricate securitization structures. The typical MBS derives its cash flow from a large pool of homogenous mortgage loans. In contrast, the CDO collateral consists of heterogeneous corporate debt obligations (term loans, leveraged loans, revolving credit facilities, corporate bonds, and even other asset-backed securities). A recent important innovation in structured finance is the synthetic CDO, in which the cash flows stem from a credit default swap (CDS) derivative contract written on a reference portfolio of corporate bonds, loans, and CDS indexes. Large, sophisticated banks with a sizable footprint in syndicated lending and bond underwriting are well suited to be CDO collateral managers, originating close to 39 percent of CDOs.


Servicers
The primary responsibilities of the servicer are to maintain contact with borrowers, collect and divert cash flows, and track performance. These services are therefore easier to perform by an entity associated with the lender of ABS collateral. As the table below shows, banks—as the largest lenders of revolving credit card debt—account for 88.6 percent of the credit card ABS servicing. Banks also dominate servicing of MBS, CMBS, and CDOs, with 54.2 percent, 48.8 percent, and 71.8 percent market shares, respectively. Although investment banks and hedge funds are significant issuers of these products, their capacity as servicers is limited because they have to build the information infrastructure to compete for these services. 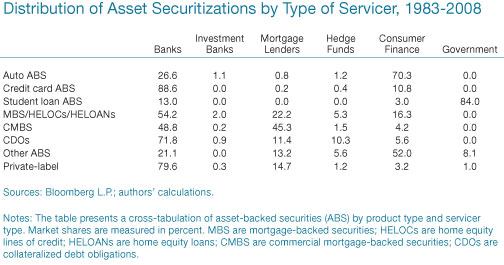 Underwriters
Banks have also been dominant providers of underwriting services in securitization (see table below). This is likely the result of their overall expertise—together with that of investment banks—in fulfilling this important role in bond and equity financing, arranging, and selling the offerings for issuing firms. Banks were able to retain large shares of the underwriting business even in product segments where they didn’t have a natural advantage in issuance. For instance, banks were able to attract 69.4 percent of the underwriting business in auto ABS, a market in which security issuance was mostly done by consumer finance companies. Similarly, they underwrote almost all student loan ABS, a market naturally dominated at issuance by government agencies. 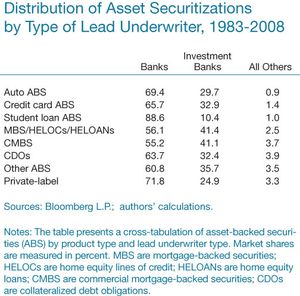 Trustees
Given the administrative nature of the trustee business, this service is best suited for large custodian banks with a cost-effective support infrastructure to process this information. The table below shows the dominance of custodian banks across all types of asset-backed securities, with a handful of banks responsible for the securitization trustee business. 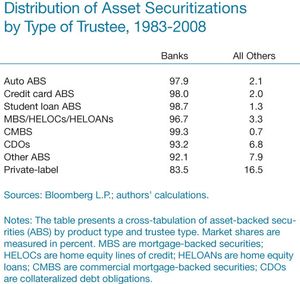 A Historical Overview of the Importance of Banks
To offer a broader view of the dominance of banks in securitization, the chart below traces the evolution of their market shares for these primary services. We’ve already highlighted the fact that the trustee business in securitization is dominated by a small group of custodian banks. Throughout the entire 1990-2008 period, these banks’ market shares of trustee activity remained well over 90 percent. We also find that banks have issued typically about half of nonagency asset-backed securities. Compared with the asset-backed issuance business, in which banks managed to retain a constant market share, they were more aggressive in expanding their servicing and underwriting, increasing their market shares from the early 1980s to the peak of the securitization market in 2007. Much of the banks’ success in underwriting can be attributed to the Gramm-Leach-Bliley Act of 1999, which removed many of the legal barriers prohibiting commercial banks from participating in equity and bond underwriting put in place by the Glass-Steagall Act in 1933. 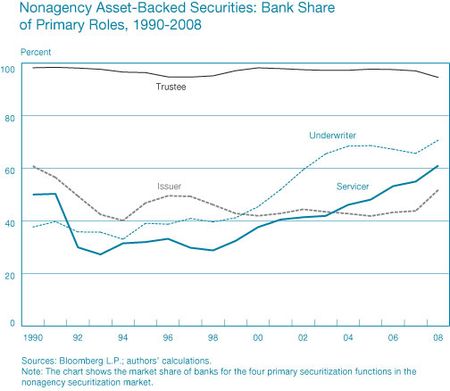 In conclusion, focusing on the main roles in the asset securitization system, we’ve shown that banks have maintained their footprint in modern financial intermediation. The system has grown in complexity, but there’s a lot more light shining on it than we thought.

Nicola Cetorelli is an officer in the Financial Intermediation Function of the New York Fed's Research and Statistics Group.

Stavros Peristiani is an assistant vice president in the Research and Statistics Group of the Federal Reserve Bank of New York.
Posted by Blog Author at 07:00:00 AM in Financial Institutions