For many years, economists have struggled to explain the “equity premium puzzle”—the fact that the average return on stocks is larger than what would be expected to compensate for their riskiness. In this post, which draws on our recent New York Fed staff report, we deepen the puzzle further. We show that since 1994, more than 80 percent of the equity premium on U.S. stocks has been earned over the twenty-four hours preceding scheduled Federal Open Market Committee (FOMC) announcements (which occur only eight times a year)—a phenomenon we call the pre-FOMC announcement “drift.”

The equity premium is usually measured as the difference between the average return on the stock market and the yield on short-term government bonds. Previous research on the size of the premium finds that it is too large for plausible levels of risk aversion (see Mehra [2008] for a review).


The Drift: A First Take

The pre-FOMC announcement drift is best summarized in the chart below, which provides two main takeaways: 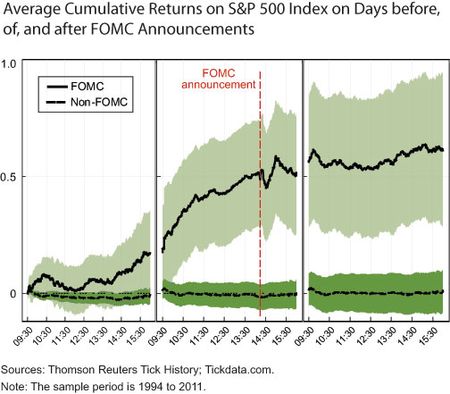 The chart shows average cumulative returns on the S&P 500 stock market index over different three-day windows. The solid black line displays the average cumulative return starting at the market’s opening on the day before each scheduled FOMC announcement to the market’s close on the day after each announcement. Our sample period starts in 1994, when the Federal Reserve began announcing its target for the federal funds rate regularly at around 2:15 p.m., and ends in 2011. (For a list of announcement dates, see the FOMC calendars.) The shaded blue area displays the 95 percent confidence intervals around the average cumulative returns—a measure of statistical uncertainty around the average return. We see from the chart that equity valuations tend to rise in the afternoon of the day before FOMC announcements and rise even more sharply on the morning of FOMC announcement days. The vertical red line indicates 2:15 p.m. Eastern time (ET), which is when the FOMC statement is typically released. Following the announcement, equity prices may fluctuate widely, but on balance, they end the day at about their 2 p.m. level, 50 basis points higher than when the market opened on the day before the FOMC announcement.

How do these returns compare with returns on all other days over the sample period? The dashed black line, which represents the average cumulative return over all other three-day windows, shows that returns hover around zero. This implies that since 1994, returns are essentially flat if the three-day windows around scheduled FOMC announcement days are excluded.


A Deeper Look through Regression Analysis

The previous chart showed stock returns without accounting for dividends or the return on riskless alternative investments. In the table below, we account for these factors in a regression analysis by considering the return, including dividends (in percent), on the S&P 500 index in excess of the daily yield on a one-month Treasury bill rate, which is a measure of a risk-free rate. We regress this “excess return” on a constant and on a “dummy” variable, equal to 1 on days of FOMC announcements. 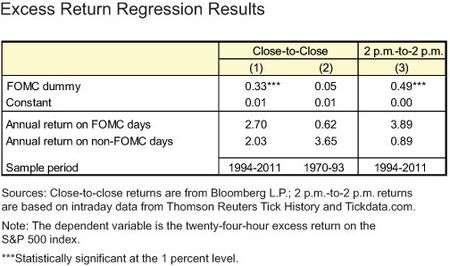 The coefficient on the constant (second row) measures the average return on non-FOMC days, while the coefficient on the FOMC dummy (top row) is the differential mean return on FOMC days. In the first column, we regress close-to-close stock returns and see that excess returns on FOMC days average about 33 basis points, compared with an average excess return of about 1 basis point on all other days. As seen in the previous chart, this return is essentially earned ahead of the announcement—hence our label of a pre-FOMC announcement drift. Indeed, in the third column we see a return of about 49 basis points during a window, while the FOMC releases its statement at 2:15 p.m. ET. In the second column, we repeat the regression using the close-to-close returns from 1970 to 1993, which is prior to when the Fed released its policy decisions right after each meeting, and see that essentially no such premium exists. The bottom rows of the table decompose the annual excess return of the S&P 500 index over Treasury bills on the return earned on FOMC days and the return earned on all other days. As shown in the third column, the return on the twenty-four-hour period ahead of the FOMC announcement cumulated to about 3.9 percent per year, compared with only about 90 basis points on all other days. In other words, more than 80 percent of the annual equity premium has been earned over the twenty-four hours preceding scheduled FOMC announcements, which occur only eight times per year.

The chart below visualizes this return decomposition. It shows the S&P 500 index level along with an S&P 500 index that one would have obtained when excluding from the sample returns on all 2 p.m.-to-2 p.m. windows ahead of scheduled FOMC announcements. In a nutshell, the figure shows that in the sample period the bulk of the rise in U.S. stock prices has been earned in the twenty-four hours preceding scheduled U.S. monetary policy announcements. 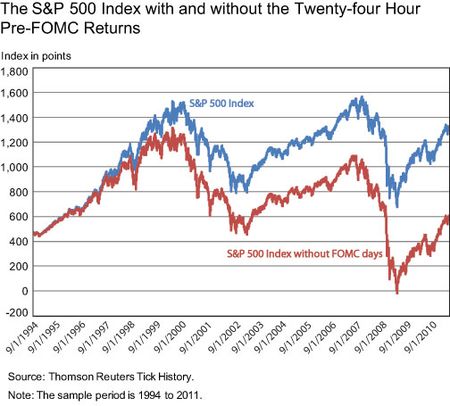 An International Perspective
Does this striking result apply only to U.S. stocks? While we do not find similar responses of major international stock indexes ahead of their respective central bank monetary policy announcements, we observe that several indexes do display a pre-FOMC announcement drift, as the chart below shows. Cumulative returns rise for the British FTSE 100, German DAX, French CAC 40, Swiss SMI, Spanish IBEX, and Canadian TSE index when each exchange is open for trading over windows of time around each FOMC announcement in our sample. 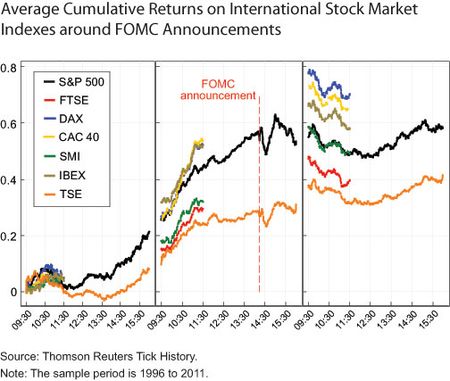 One might expect similar patterns to be evident also in other major asset classes, such as short-and long-term fixed-income instruments and exchange rates. Surprisingly, though, we don’t find any differential returns for these assets on FOMC days compared with other days. In other words, the pre-FOMC drift is restricted to equities. Further, we don’t find analogous drifts ahead of other macroeconomic news releases, such as the employment report, GDP and initial claims, among many others. The effect is therefore restricted to FOMC, rather than other macroeconomic, announcements. In the Staff Report, we attempt to account for standard measures considered in the economic literature that proxy for different sources of risk, such as volatility and liquidity, but they also fail to explain the return. Finally, we consider alternative theories that feature political risk, investors with capacity constraints in processing information, as well as models where stock market participation varies over time. Although these theories can help qualitatively explain the existence of a price drift ahead of FOMC announcements, they are counterfactual in some dimension of the empirical evidence.

Our findings suggest that the pre-FOMC announcement drift may be key to understanding the equity premium puzzle since 1994. However, at this point, the drift remains a puzzle.

Thank you for your comments.

David Hou and Dr. Duru ask whether the drift is correlated with the subsequent Fed action. In the research paper, we study this correlation (among others) in Table 11. The results suggest that the target rate changes do not explain the pre-FOMC announcement returns. When splitting the sample into monetary policy easing and tightening cycles, we see somewhat higher returns in easing cycles. However, these results are not statistically significant. Therefore, pre-FOMC returns do not appear to be linked to the contemporaneous policy stance.

In response to Talley Leger’s question, we follow the academic literature, which commonly defines the equity risk premium as the difference between equity returns and the returns on short-term government bonds (which are risk-free). The equity premium puzzle is the finding that standard economic models cannot generate a return spread between these two asset classes without assuming implausibly high levels of risk aversion. That being said, in Table 9 in the research paper we study whether other asset classes such as longer-term Treasury notes also feature significant pre-FOMC announcement returns and find no such evidence.

In response to Michael Kelly, in the research paper we study the returns before and after scheduled FOMC meetings (Table 12) and do not find any evidence of a reversal in subsequent days or lower returns prior to FOMC days. This is why we think the return decomposition in the blog is reasonable.

To Dave S, Figure 3 in the research paper shows the drift to be present also before the financial crisis period.

I have a similar question as Mr. Hou. It seems to me that when the market thinks the Fed is in an easing cycle, the FOMC drift is even stronger. I would be quite surprised to learn that the trend of monetary policy has no impact on the drift. Perhaps to avoid bias in determining whether the Fed is an easing cycle, you could condition the analysis on the rate decision PRIOR to the meeting...

This suggests a very simple remedy: randomize the timing of the FOMC commentary and announcements. The cause is that the commentary is regular and people pump the stocks in advance.

If you made the timing secret and the FOMC did its thing sometimes 3 times a year, sometimes 5, sometimes 4, sometimes 12, the price building would disappear.

Of course that would contribute to the popular discourse that the Fed is secretive and inpenetrable in its decisionmaking and statements. Unless they're willing to randomize their announcements and take that risk, there's no alternative.

On the surface this appears to be a great example of George Soros' theory of "Reflexivity".

Unfortunately, I'm not sure the period covered is representative of any given timeframe...especially observations since the crisis. That said, still some good food for thought!

I believe that this effect tends to reverse on the days after the announcement. If that's true, this is more of an anomaly than an explanation of the risk premium.

"The Greenspan Put" and "Helicopter Ben" are cute terms used in the market by commentators for a reason. Now you've paired some nice graphs and significance tests to that bit of market lore. In fact you may have validated it, officially, so to speak.

this is really interesting! do you guys have any sense of whether cumulative returns differ if you were to separate "fomc days" into three categories of target rate increase, decrease, and rates held unchanged? i'd be very interested in seeing the first graph replicated along those lines. would the 80% figure still hold in every case? also how would the returns look if you were to somehow proxy for "expected" vs. "unexpected" policy moves by the fomc?