The Role of Bank Credit Enhancements in Securitization

As Nicola Cetorelli observes in his introductory post, securitization is a key element of the evolution from banking to shadow banking. Recognizing that raises the central question in this series: Does the rise of securitization (and shadow banking) signal the decline of traditional banking? Not necessarily, because banks can play a variety of background (or foreground) roles in the securitization process. In our published contribution to the series, we look at the role of banks in providing credit enhancements. Credit enhancements are protection in the form of financial support against losses on securitized assets in adverse circumstances. They’re the “magic elixir” that enables bankers to convert pools of possibly high-risk loans or mortgages into highly rated securities. This post highlights some findings from our article. One key finding: Banks are not being eclipsed by insurance companies (which are part of the shadow banking system) in the provision of credit enhancements.


What We Talk about When We Talk about Bank Credit Enhancements
Everything we know about bank-provided credit enhancements we’ve learned from studying bank holding companies’ (BHCs) FR Y9-C forms (their regulatory reports). Between 2001:Q2, when BHCs were first required to disclose securitization activity, and 2009:Q4, when they were required to bring securitized assets back on their balance sheets, banks reported dollar amounts on three types of enhancement. The first was credit-enhancing, interest-only strips and excess spread accounts. Excess spread is the monthly revenue remaining on a securitization after all payments to investors, servicing fees, and charge-offs. It represents the first line of defense against losses to investors in a securitization, as the excess spread account must be exhausted before even the most subordinated investors incur losses. The second enhancement, subordinated securities and other residual interest, is a standard form credit enhancement. By holding a subordinated or junior claim (or tranche), the bank that securitized the assets is in the position of first-loss bearer, thereby providing protection to more senior claimants. The third enhancement is actually a very traditional banking product: standby letters of credit (SLCs). An SLC obligates the bank to provide funding to a securitization structure to ensure investors of timely payments on the issued securities, for example, by smoothing timing differences in the receipt of interest and principal payments, or to ensure investors of payments in the event of market disruptions. Banks also provide enhancements in the form of representations and warranties that obligate them to take back a loan or mortgage if it defaults early in its life, but we don’t have data on those enhancements. 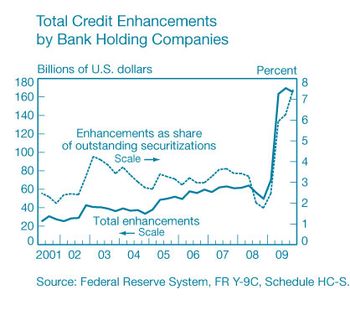 
“Our financial guaranty insurance and reinsurance businesses also compete with other forms of credit enhancement, including letters of credit, guaranties and credit default swaps provided, in most cases, by banks, derivative products companies, and other financial institutions or governmental agencies, some of which have greater financial resources than we do, may not be facing the same market perceptions regarding their stability that we are facing and/or have been assigned the highest credit ratings awarded by one or more of the major rating agencies” (Radian Groups 2007 10-K, p. 46). 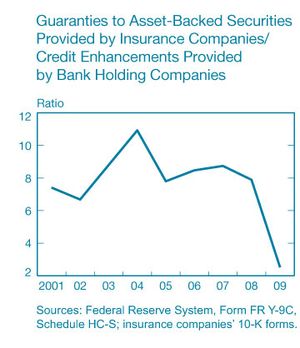 So on the overall question of whether banks are losing market share to a shadow bank (in this case, insurance companies) in the business of providing enhancements, our answer is a simple “no.”

In our paper, we were interested in the possibility that banks might use enhancements to signal the unobservable quality of the assets they’re securitizing. It’s generally acknowledged that securitization is plagued by some degree of asymmetric information, that is, the bankers know more about the quality of the collateral backing a securitization deal than do investors in the deal. According to the signaling story, bankers can signal the quality of the assets they’re securitizing by their willingness to keep “skin in the game” (which is what an enhancement does—it exposes the bank to losses). Note that the signaling story implies a positive relationship between the level of enhancements and the performance of the collateral (since the enhancements are signaling quality), just the opposite of the buffer story above.

Benjamin H. Mandel is a former assistant economist in the Federal Reserve Bank of New York’s Research and Statistics Group.

Chenyang Wei is a senior economist at the Federal Reserve Bank of Philadelphia.
Posted by Blog Author at 07:00:00 AM in Financial Institutions, Financial Markets