« Interest on Excess Reserves and Cash “Parked” at the Fed | Main | If Interest Rates Go Negative . . . Or, Be Careful What You Wish For »

Banks increasingly move money around the world. Over the last thirty years, gross international claims of banks from all countries have grown ten-fold, reaching a peak of about $25 trillion in 2007 (see chart below). Such global banking flows have been much in the news recently, sometimes depicted as a key culprit of the transmission around the globe of the shocks following the bankruptcy of Lehman Brothers, and more recently the European sovereign debt crisis. The discourse in the regulatory arena seems to share this sentiment, with a bias towards curbing some of the global banking activity (for example, Bank for International Settlements, CGFS 2010, and the United Kingdom Independent Commission on Banking 2011). We acknowledge that global banking has contributed to the international propagation of shocks during the 2007 to 2009 crisis, as shown in a range of recent studies (for example, Acharya and Schnabl 2010, Cetorelli and Goldberg 2011, and 2012). However, we argue that there still are many unknowns regarding the intensity and the direction of global banking flows, as well as the consequences of these flows. There is a pressing need to refine our understanding of these dynamics, not just from a positive angle, but also to inform policy analysis. We take steps in this direction in some of our research, discussed in this blog post. We show that global banks manage liquidity on a global scale and that internal funding reallocations are bank and business-model specific. This centralized liquidity management is a feature of normal times, as well as a feature of market stress periods. 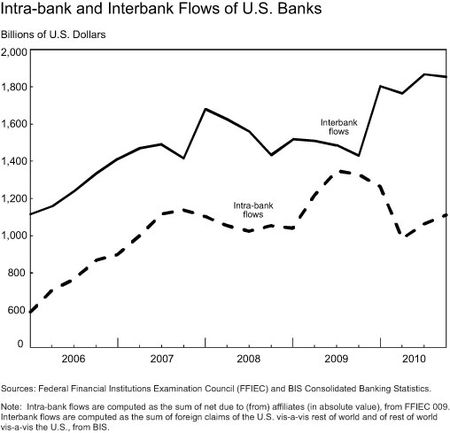 We can consider alternative ways that a global organization might manage liquidity. Perhaps global banks move funds in and out of foreign markets in waves, with fund surges and reversals cutting across all destination countries and/or regions of the world. This idea would suggest that global banks sound a widespread retreat from international activity when they are hit by an adverse shock, instead protecting or expanding home-market positions. This logic would have the domestic operations of a global bank at the top of an organizational pecking order, with priority placed on support for the parent-bank balance sheet relative to support for the bank’s foreign operations, irrespective of foreign location-specific considerations. Patterns of “capital bonanzas” and “sudden stops” have been documented for international capital flows more broadly, as in Reinhart and Rogoff 2009 and Forbes and Warnock 2011.

Alternatively, perhaps global banks manage liquidity according to a locational pecking order, where there is no obvious unconditional organizational preference in determining how internal funds should be allocated. Rather, each parent bank assesses the marginal conditions of each foreign location along both funding and investment dimensions. It draws funds more from locations where it normally attracts local funds, reflecting an advantage in external capital market access there, while it might shield locations that are considered important for that bank’s investment activity and revenue generation. Said differently, in this second scenario, banks take into overall consideration the relative costs and benefits of the marginal dollar at each location in which they operate before deciding on directions of internal funding allocations.

The implications for gross international flows and cross border shock transmission are very different depending on whether the organizational or locational pecking order is the prevalent mode of liquidity management. If funds move in waves, then global banking may increase volatility. In that case, some concerns about global banking activities (raised, for example, in IMF 2010 and Pontines and Siregar 2012) seem justified. However, if liquidity management instead is driven by how each location fits into the overall business-model needs of each specific bank, then a country could experience–at the same time–both inflows and outflows of funds across the different foreign banks hit by a shock.


Spectrum of Reallocations
Our recent work looks into these questions in depth. We used confidential data that U.S. banks report quarterly if they have global activities. This dataset offers a full breakdown of positions by each bank and for each country in the world, so we can analyze the full spectrum of international funding reallocations, both from an individual bank perspective and from a “host” country perspective. We identified shock events during the 2007-2008 period that we could reasonably consider to be a shock to the head office of these banks and not related to their foreign operations; first, an adverse shock to banks from asset backed commercial paper exposures, and then a positive shock from the introduction of liquidity facilities. Next, we investigated how each bank reallocated internal funds in response to the shocks. We found that banks very much follow a locational pecking order when managing their global liquidity needs. Those markets that we identified as “core investment markets” for a given bank (those locations that on average represented a relatively large share of that bank’s international lending) contributed less to internal funding reallocation or even registered an increase in internal funding. Other foreign locations that we identified as “core funding markets” for a bank (locations where that bank typically taps significant local funding sources) were the ones that contributed relatively more to meeting the head office funding needs.

Overall, these findings add to our understanding of how global banks manage liquidity and how, in turn, their liquidity management strategies affect international funding flows. It is certainly the case that global banks play an important role in propagating positive and negative shocks around the globe. However, these international flows have a strong bank-specific and location-specific component. These tendencies mean that even in times of shocks simultaneously hitting many banks, as during the crisis, we still cannot predict a common direction in the gross flows of intra-bank funding. To try and visualize this dynamic, we have depicted visually the breakdown in total inflows and outflows, by country of destination, which our model predicts as a result of the first of the two shocks we studied. The exercise shows that, given the characteristics of each bank in the analysis, the shocks they experienced, and their relationships with affiliates, some countries are predicted to experience total gross outflows (all banks in operation there “withdrew” funds from their local offices and sent them elsewhere), while other countries are predicted to experience total gross inflows. In addition, many other countries were predicted to experience simultaneously inflows from some banks and outflows from some other banks. After the U.S. banks had balance sheet disturbances, there was not a strong pattern of “funding waves” whereby all their affiliates were used to buffer the parent bank shock. Instead, we saw differentiation across parent banks and across their respective affiliate markets in the internal capital market flows. These insights should be useful for the current policy debate. From the perspective of a country that allows foreign banking activity, macroeconomic transmission from foreign banks may be less a function of its overall openness and more related to the particular distribution of foreign banks engaged in their economy, the balance sheets of those foreign banks, and the mode of operations within the country.

Nicola Cetorelli is an officer in the Financial Intermediation Function of the New York Fed's Research and Statistics Group.

Linda S. Goldberg is a vice president in the Financial Intermediation Function of the New York Fed's Research and Statistics Group.
Posted by Blog Author at 07:00:00 AM in Financial Institutions, International Economics, Liquidity