If Interest Rates Go Negative . . . Or, Be Careful What You Wish For -Liberty Street Economics 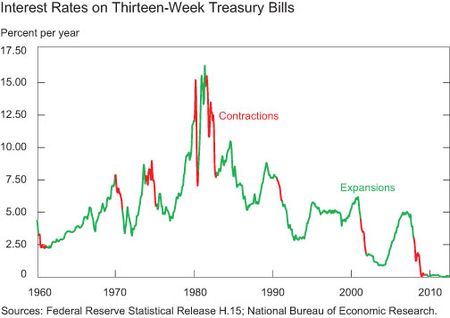 Without taking a position on either the merits of negative interest rates or the Fed's statutory authority to fix the IOER below zero, this post examines some of the possible consequences. We suggest that significantly negative rates—that is, rates below -50 basis points—may spawn a variety of financial innovations, such as special-purpose banks and the use of certified bank checks in large-value transactions, and novel preferences, such as a preference for making early and/or excess payments to creditworthy counterparties and a preference for receiving payments in forms that facilitate deferred collection. Such responses should be expected in a market-based economy but may nevertheless present new problems for financial service providers (when their products and services are used in ways not previously anticipated) and for regulators (if novel private sector behavior leads to new types of systemic risk). This post supplements an earlier post in Liberty Street Economics that reviewed possible disruptions that could result from zero interest rates.


Cash and Cash-like Products
The usual rejoinder to a proposal for negative interest rates is that negative rates are impossible; market participants will simply choose to hold cash. But cash is not a realistic alternative for corporations and state and local governments, or for wealthy individuals. The largest denomination bill available today is the $100 bill. It would take ten thousand such bills to make $1 million. Ten thousand bills take up a lot of space, are costly to transport, and present significant security problems. Nevertheless, if rates go negative, the U.S. Treasury Department’s Bureau of Engraving and Printing will likely be called upon to print a lot more currency as individuals and small businesses substitute cash for at least some of their bank balances.


Early Payments, Excess Payments, and Deferred Collections
Beyond cash and special-purpose banks, a variety of interest-avoidance strategies might emerge in connection with payments and collections. For example, a taxpayer might choose to make large excess payments on her quarterly estimated federal income tax filings, with the idea of recovering the excess payments the following April. Similarly, a credit card holder might choose to make a large advance payment and then run down his balance with subsequent expenditures, reversing the usual practice of making purchases first and payments later.


Conclusion
The take-away from this post is that if interest rates go negative, we may see an epochal outburst of socially unproductive—even if individually beneficial—financial innovation. Financial service providers are likely to find their products and services being used in volumes and ways not previously anticipated, and regulators may find that private sector responses to negative interest rates have spawned new risks that are not fully priced by market participants.

Kenneth D. Garbade is a senior vice president in the Money and Payments Studies Function of the Federal Reserve Bank of New York's Research and Statistics Group.

James J. McAndrews is an executive vice president and the director of research for the Bank.
Posted by Blog Author at 07:05:00 AM in Financial Institutions, Financial Markets, Monetary Policy

When commentators call for negative interest rates, aren't they calling for negative nominal rather than real interest rates? Maybe I'm missing something, but Mankiw and others have floated the idea of negative real rates for a while, and this article doesn't mention that.

Thanks for the tips. Glad to see you guys are preparing everyone for negative IOER rates.

So without the fiscal mechanism working, whats the point of lower rates? Is it to help the banking industry? who got us into this mess in the first place? or is it to help the corporate world? that has record profits and isn't spending a dime? Who's benefiting from lower rates now? It's easy to point to who benefits from higher rates now, the ever increasing large deposit base... namely individuals with deposits. I can also tell you, as debtor country the idea of lower rates benefiting all makes sense, but it hasn't or will it ever help underwater mortgage borrowers or credit card balances that are getting charged even higher rates now. So i ask the question again, who is this monetary policy helping now??

Brilliant article. I don't think any of these things are reasons to not push IOER negative if the point is to push banks into making (negative expectation) loans, but I hadn't thought about the incentive to pre-pay taxes and other ideas presented here. Essentially, a key observation is that not collecting money in the first place is a practice that earns zero interest...it's just weird to think about that, but it's a great observation and it really does lead to a whole line of interesting thought. Well done.