The Fed’s Emergency Liquidity Facilities during the Financial Crisis: The CPFF

This is the first post in a series that details the steps taken by the Fed in its role as lender of last resort during the 2007-09 financial crisis. At the height of the crisis, financial intermediation activities had virtually collapsed. In response, the Federal Reserve created liquidity facilities authorized under section 13(3) of the Federal Reserve Act, citing “unusual and exigent circumstances.” These facilities provided last-resort lending options in strained markets to prevent stress in the financial sector from spilling over onto real economic activity. In this post, we review the Commercial Paper Funding Facility (CPFF), a crucial program among the special lending facilities.


Breaking the Buck
On September 16, 2008, the day after the announcement of Lehman Brothers’ bankruptcy, the Reserve Primary Fund, a money market mutual fund with $785 million in exposure to Lehman, “broke the buck” when its net asset value per share fell below $1. The Reserve Primary Fund was one of the oldest prime money market funds, an important class of money market funds that had $3.45 trillion under management in 2008. Prime money market funds have strict restrictions on the amount of credit and illiquidity exposure that they are allowed to manage, and highly rated, short-term commercial paper is one of their largest classes of investments. Commercial paper is a form of corporate debt with a maturity of up to 270 days. This type of debt is an important vehicle for corporations to obtain market-based financing for short-term assets, such as credit card and auto debt, as well as financing for regular payments, such as payroll and inventories, as an alternative to lines of credit at banks.


A Run and a Credit Crunch
When investors in the Reserve Primary Fund understood that its entire exposure to Lehman Brothers would have to be written off, they started to withdraw their investments rapidly. On September 16, after investors had withdrawn $10.8 billion of the $62 billion held in the Reserve Primary Fund, the firm announced that it would liquidate. In reaction to this turmoil, institutional money market investors (such as treasurers of nonfinancial corporations) rapidly started withdrawing their deposits from prime funds, creating a “run” on these funds that structurally resembled a classic bank run. Because commercial paper and corporate notes constituted more than 60 percent of the holdings of these funds, the result was that large commercial paper issuers, which include not only financial institutions but also manufacturing, telecommunications, and other industrial companies, faced great difficulty in rolling over their short-term debt. Within five days of Lehman’s failure, the commercial paper spread had widened considerably for various types of commercial paper and for various credit ratings. For example, the spread of AA-rated asset-backed commercial paper (ABCP) had widened from about 60 basis points to more than 200 basis points. On September 30, 2008, the spread exceeded 400 basis points as issuers found it increasingly difficult to find buyers for their debt, especially for maturities of thirty days or more. As a result, many issuers were forced to roll over their commercial paper daily. These high borrowing costs threatened the economic activities of commercial paper issuers. 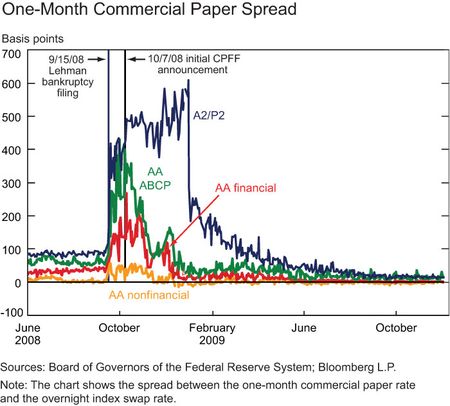 The CPFF Is Born
In response to the distress in the commercial paper market, the Federal Reserve announced on October 7, 2008, the creation of the Commercial Paper Funding Facility, intended to operate as a lender of last resort in the commercial paper market. The facility began registration on October 20, 2008, and expired on February 1, 2010. It was designed to provide a liquidity backstop for commercial paper issuers while minimizing disruption to the market and discouraging excessive risk taking. For this reason, as well as to limit potential taxpayer losses, the Fed limited its purchases to only the highest rated paper, as determined by credit rating agencies. Because such top-tier commercial paper accounted for more than 90 percent of the market in 2008, this requirement did not significantly impair the Fed’s ability to provide liquidity.

Although banks and nonbank financial institutions have generally made up approximately 80 to 90 percent of commercial paper issuance, the CPFF was one of the few liquidity facilities established by the Fed that allowed nonfinancial corporations to borrow directly.


CPFF Usage and Pricing
In December 2011, the FRBNY released data on the usage of the CPFF. The figure below (at left) shows that lending to nonfinancial institutions was a meaningful portion of CPFF lending during the height of the crisis. Perhaps more importantly, lending to nonbank financial institutions (NBFI)—that do not have access to the Federal Reserve’s discount window—accounted for an even greater share of the borrowing. The figure below (at right) breaks down the borrowing by region: during the crisis, U.S. subsidiaries of foreign banks were equally affected by funding difficulties and were major users of the facility. While this may seem surprising, it is worth noting that these institutions are important counterparties to U.S. banks as well as lenders to U.S. households and businesses (in 2008-09, foreign banks held over $400 billion in U.S. loans). 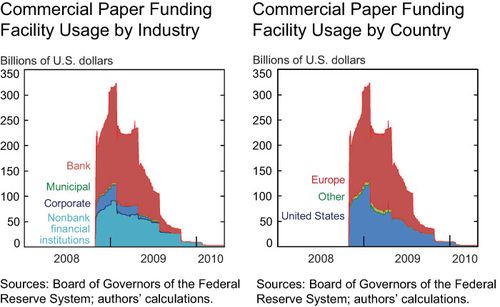 The CPFF was notable for its pricing structure, which was set so as to be attractive only during extreme market stress. On the one hand, if rates were set too high, imposing high costs to borrowers, the CPFF would not provide significant relief to the market. On the other hand, if rates were set too low, companies might decide to opportunistically finance commercial paper through the CPFF, even after the normal functioning of the commercial paper market returned. The Fed therefore purchased unsecured commercial paper at an overnight interest rate plus 100 basis points, with an additional 100-basis-point credit surcharge for most unsecured borrowers, and purchased ABCP at a rate of 300 basis points above the overnight rate. The spreads of 200 and 300 basis points were significantly higher than historical spreads, ensuring that these rates would discourage financing through the facility except during very stressed market conditions. In addition, the Fed implemented a registration fee of 10 basis points of the maximum an issuer could sell to the CPFF, which represented an insurance premium and commitment fee. Although loans were more expensive than usual, businesses were willing to borrow from the Fed because of its policy of purchasing ninety-day commercial paper and holding it to maturity, which eased the daily rollover risk companies otherwise faced in the market. 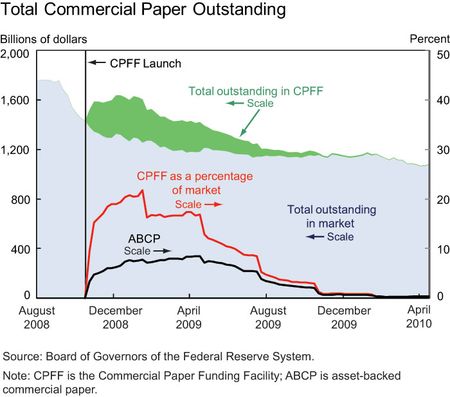 As seen in the first chart, after the Fed’s announcement of the CPFF, rates on eligible commercial paper (rated A1/P1) fell immediately, while the rates for lower-rated paper (for example, A2/P2) remained elevated. Even more telling for the importance of the facility is its total usage, which is shown in the above chart. At its peak, CPFF holdings accounted for 20 percent of all commercial paper outstanding, totaling approximately $350 billion. This support allowed markets to gradually adjust, as the conditions in the financial system recovered.

The extent to which rates were directly impacted by the creation of the program is difficult to measure conclusively, but it seems clear that the CPFF had a substantial calming effect on markets. Issuers, such as Ford Motor Company and Chrysler, publicly announced their eligibility for the program as a signal to creditors that their short-term borrowing needs would be adequately met despite the market stresses. Ford Motor Company used the CPFF between October 2008 and September 2009 and financed a peak amount of $7 billion on March 2, 2009.

The registration fee and credit surcharge were designed to protect taxpayers against potential losses that could have occurred if commercial paper issuers had defaulted (see this paper by Adrian, Kimbrough, and Marchioni for more detail on the mechanics of the CPFF). However, as the borrowers were all of high credit quality, and financial market turbulences subsided, no actual losses occurred. As a result, the fee and surcharge represented income for the Fed that was passed on to the Treasury Department. From the borrowers’ perspective, it made sense to pay the fee as market rates were even higher than what the Fed charged. Fleming and Klagge calculate that the CPFF generated $5.29 billion in net income over its lifetime.

The Commercial Paper Funding Facility illustrates how the Federal Reserve, as the lender of last resort in times of extreme market stress, directly assisted the broader functioning of financial markets beyond its traditional narrow focus on depository institutions. These unusual actions were necessitated by the rapid growth of maturity transformation that took place outside of the traditional banking system in the years leading up to the crisis. The CPFF, in particular, was targeted as a backstop for a specific (very important) market segment rather than a specific group of institutions. There is no doubt that the public sector’s future role in backstopping the nontraditional banking system will continue to be the subject of much discussion.


Ernst Schaumburg is a research officer in the Capital Markets Function of the New York Fed's Research and Statistics Group.
Posted by Blog Author at 09:48:12 AM in Fed Funds, Financial Markets, Liquidity, Monetary Policy