In our recent post on the state and local sector, we argued that structural problems in state and local budgets were exacerbated by the recession and would likely restrain the sector’s growth for years to come. The last couple of years have witnessed threatened or actual defaults in a diversity of places, ranging from Jefferson County, Alabama, to Harrisburg, Pennsylvania, to Stockton, California. But do these events point to a wave of future defaults by municipal borrowers? History&#8212at least the history that most of us know—would seem to say no. But the municipal bond market is complex and defaults happen much more frequently than most casual observers are aware. This post describes the market and its risks.

The $3.7 trillion U.S. municipal bond market is perhaps best known for its federal tax exemption on individuals and its low default rate relative to other fixed-income securities. These two features have resulted in household investors dominating the ranks of municipal bond holders. As shown below, individuals directly hold more than half, or $1.879 billion, of U.S. municipal debt; when $930 billion in mutual fund holdings is included, the household share rises to three-quarters. Although the low default history of municipal bonds has played a key role in luring investors to the market, frequently cited default rates published by the rating agencies do not tell the whole story about municipal bond defaults. 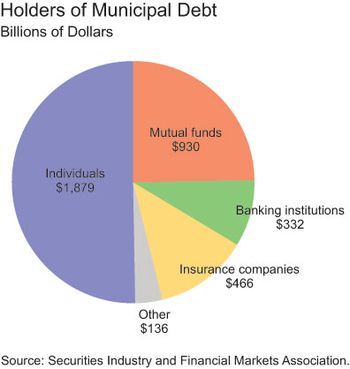 However, not all municipal bonds are rated and the market’s rated universe only tells part of the story. We have developed a more comprehensive municipal default database by merging the default listings of three rating agencies (S&P, Moody’s, and Fitch) with unrated default listings as tracked by Mergent and S&P Capital IQ. Rather than confirming Moody’s 71 listed defaults from 1970 to 2011, our database shows 2,521 defaults during this same period. Similarly, our database indicates 2,366 defaults from 1986 to 2011 versus S&P’s 47 defaults during this same period. In total, we find 2,527 defaults from the period beginning in the late 1950s through 2011. (We don’t have complete information on the number of issues, so we can’t compare default rates.) 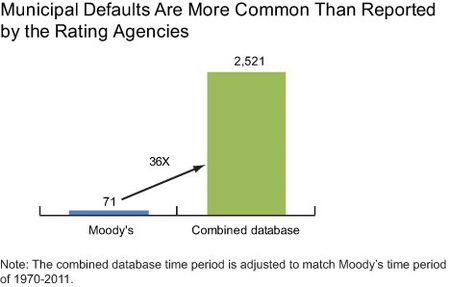 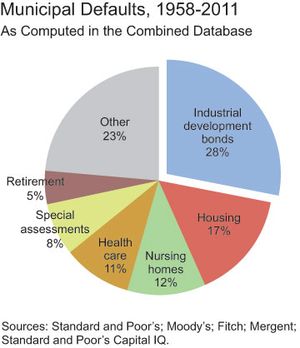 To provide some background, we note that the municipal market is bifurcated into general obligation (GO) bonds and revenue bonds. GO bonds carry the broad full faith and credit pledge of a state or local government.; GO pledges are considered among the strongest type of security because municipalities have the authority to levy taxes; GO defaults like those in Jefferson County and Harrisburg are relatively rare. Revenue bonds, on the other hand, are backed only by a pledge of revenues raised from a specific enterprise, such as an airport, toll road, hospital, or school. GO bonds are therefore stronger than revenue bonds, because the revenue base for general obligations is much broader (for example, the ability to levy taxes on property or citizens within a specific geographic area) than the typical revenue bond revenue base (for example, a specified stream of revenue or enterprise).

The default risk of a revenue bond varies with the essentiality of the service provided by the enterprise. For example, water and sewer utilities provide essential services and thus have a strong ability to generate revenue. By contrast, the services offered by an alternative energy plant, pollution control facility, or other corporate-like entity may not be considered essential, because of the availability of other energy sources. Thus, these enterprises may have less potential to generate revenue. Alternative energy plants, pollution control facilities, and other corporate-like enterprises are all examples of industrial development bonds (IDBs). IDB financing projects using new technologies or projects with no historical track record tend to make up a majority of unrated IDB defaults.

It is also not surprising that revenue bond sectors, such as IDBs, experienced more defaults than GO bonds because they have made up almost two-thirds of municipal new issuance since the mid-1990s. While total municipal issuance has bounced around over the past sixteen years, revenue bonds have remained between 60 percent and 70 percent of new issuance. 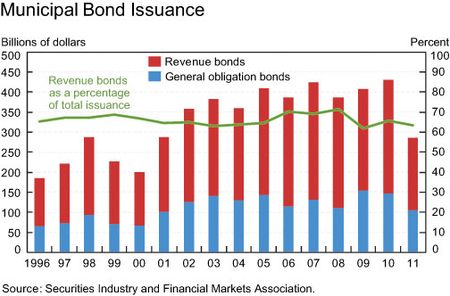 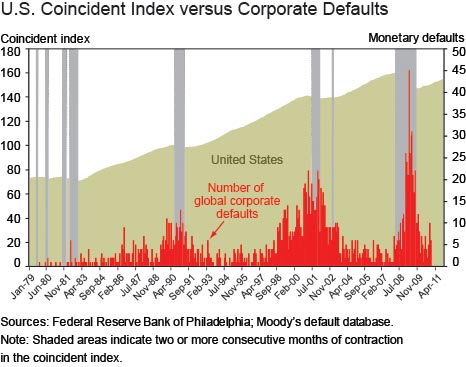 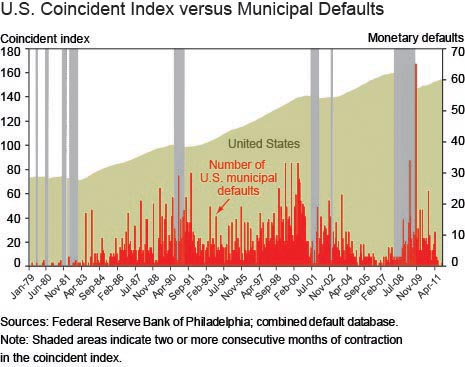