Some market watchers and academic researchers are concerned about a “Balkanization” of banking, owing to a sharp decline in cross-border international banking activity (see chart below), and an increased home bias of financial transactions. Meanwhile, policy and regulatory efforts are under consideration that may further induce banks to shift away from international activity, including ring-fencing of domestic banking operations, other forms of "financial protectionism," and enhanced oversight and prudential measures. 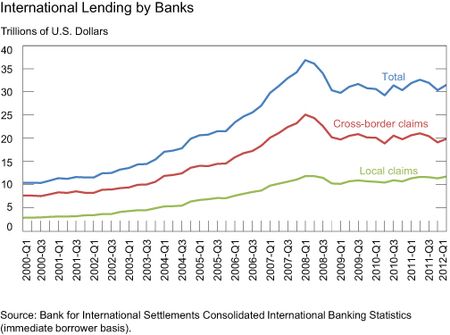 While enhanced oversight and prudential measures are familiar concepts, it is not always clear what ring-fencing and financial protectionism mean in the context of international banking. In this post, we try to lift the fog in terminology by presenting concepts and subtext behind recent policy discussions. We also point out that while some initiatives are relatively new, other policies less frequently discussed have been in place for some time, both in the United States and internationally.

Defining Concepts
In the recent context, financial protectionism is a term used by some observers to describe policies that restrain the international operations of banks with the goal of supporting the continuation of domestic banking operations. This language may not be appropriate. Financial protectionism in this sense is not directly analogous to the more familiar concept of “trade protectionism.” In international trade, protectionist measures are often obstacles to trade, aimed at sheltering groups of domestic producers from international competition and increasing their prospects for growth. By contrast, in international banking, financial protectionism is a label that is sometimes wrongly applied because it refers to efforts to protect the stability of domestic financial intermediation (such as the availability of credit to households and businesses and the safety of deposits) rather than to protect domestically owned banks from foreign competition. Protections are not the same as protectionism. Another term often heard in this context is ring-fencing, a more specific legal concept referring to policies that require certain activities of a complex financial firm to reside in legally distinct entities. The practice can change the very nature of the global financial firm by reducing synergies and spillovers between various financial operations, while potentially helping with future resolution, should that become necessary, of financial firms that have a broad and complicated geography of assets and liabilities.

The Context for Recent Policy Discussion
Events in recent years provide the backdrop for the expanded discussions of ring-fencing and financial protections. Take the experience of Iceland, where the assets of domestically owned banks expanded to over 1,000 percent of GDP and gross external indebtedness reached 550 percent of GDP at the end of 2007, largely on account of the liabilities of the banking sector. The global banking crisis in late 2008 rapidly exposed Iceland’s vulnerabilities, its largest commercial banks collapsed, and extensive economic and fiscal damage ensued. Additional context comes from the experience of Ireland, where the cost to the government to recapitalize large, distressed banks amounted to 8.5 percent of GDP in 2010. These examples served as potent reminders to many countries of the domestic vulnerabilities that can arise from financial firms with a broad international presence.

In 2011, the Independent Commission on Banking in the United Kingdom recommended that the global operations and investment banking divisions of U.K. banks be separated (ring-fenced) from the domestic retail operations. This proposed separation was aimed at shielding the U.K. domestic retail banking system (which serves retail customers and small businesses in the domestic economy) from the risks and losses that could arise from the large international banking operations of U.K. financial firms. In practice, the operations of these separate entities would each hold enough liquidity to satisfy the principle of “self sufficiency.” Accordingly, the central bank would not provide a commitment for liquidity support to those international operations, should the banks have difficulties. Other measures under consideration include policies that compensate retail deposit holders ahead of bondholders in the event of a bank failure.

The Swiss authorities—the Swiss Financial Market Supervisory Authority (FINMA) and the Swiss National Bank—have proposed legislation that pertains to the global operations of Swiss banks and to foreign banks operating in Switzerland. FINMA has presented a set of criteria using a scorecard approach—the “Resolution Effectiveness Test”—to determine whether, at any time, the banks are organized in a way that facilitates resolution in a crisis while protecting the systemically important functions of those banks within Switzerland. Proposed ring-fencing measures could require changes in entities so that intra-banking group exposures are limited and domestic and foreign operations of affiliated entities are legally separated.

The United States recently proposed that foreign banking organizations with a significant U.S. presence be required to create an intermediate holding company over their U.S. subsidiaries, which would help facilitate consistent and enhanced supervision and regulation of the U.S. operations of these foreign banks. Foreign banks would also be required to maintain stronger capital and liquidity positions in the United States, helping to increase the resiliency of their U.S. operations.

Other countries are also considering new measures. For example, Germany’s supervisory authority has increased its surveillance of intra-bank support to foreign operations.

Focus on Internal Capital Markets
The more intense focus on intra-group financial support, as in Germany, is relatively recent. Such intra-group flows, also referred to as internal capital market transactions, serve many purposes in financial firms and are used extensively for allocating resources across borders. They’re also a mechanism for stabilizing lending in some countries while also transmitting disturbances across borders, as documented in a number of recent papers by Cetorelli and Goldberg. Restrictions on the amount of credit one entity extends to an affiliated counterparty outside the country are designed to address the risk that branches or related entities are left vulnerable by funding gaps in intra-organization positions. Some proposals would trap more capital and liquidity in local markets, and move away from the less inhibited flows allowed under international banking operations performed through branch networks.

With “Net Due To” restrictions, many regulators can already limit the reliance of branches of foreign banks on support from their parent organizations. The idea is that the ability of the parent organization to provide support to the branch is influenced by the parent’s financial condition. In general, these restrictions mainly activate when concerns arise about branch vulnerabilities to parent withdrawal of support. Supervisors can require the branch to have a “Net Due To” position on intra-group flows, which eliminates reliance on funding support from the parent.

Under NDP laws, the claims of domestic depositors on the assets of a failed bank are elevated over the claims of foreign depositors and general creditors, in part to reduce the exposure of deposit insurance funds. This restriction is most visible in the resolution of stressed firms. In domestic jurisdictions with NDPs, domestic branch assets are not immediately available to the foreign country receiver; this potentially favors domestic resolution efforts and spurs other consequences. Countries with some form of NDP include the United States (under the Omnibus Budget Reconciliation Act of 1993, section 3001), Argentina, Australia, China, Malaysia, and Russia. In some other jurisdictions, including Chile, Hong Kong SAR, and Switzerland, depositor preference only applies to insured deposits, and this variation is included in the U.K. Independent Commission on Banking’s 2011 recommendations. Some objections to deposit preference have been raised: Marino and Bennett argue that these approaches not only increase the chances of ring-fencing, but also increase “systemic risks and perhaps generate runs by foreign depositors on large institutions.”

Other forms of protections used by bank supervisors are asset-maintenance requirements, where branches of foreign banks are obligated to show consistent maintenance of eligible assets held specifically in the domestic market (calculated as a percentage of branch liabilities). The intent is to ensure that foreign bank liquidity is retained in the domestic branch to protect domestic creditors in the event of a liquidation. A stronger form of this is an asset pledge (or capital equivalency deposit), where such eligible assets must be deposited in a separate institution’s account to be supervised by the banking regulator. As noted by Hüpkes, the United States (under 12 CFR 28.15 and 12 CFR 28.20), Canada, Germany, Switzerland, and Singapore implement various forms of these provisions.

Arun Gupta is a research analyst in the Research and Statistics Group.