The Macroeconomic Effects of Forward Guidance

In this post, we quantify the macroeconomic effects of central bank announcements about future federal funds rates, or forward guidance. We estimate that a commitment to lowering future rates below market expectations can have fairly strong effects on real economic activity with only small effects on inflation.

Macroeconomists, and Federal Reserve economists in particular, face the challenge of quantifying the effects of monetary policy on the economy. Considerable research has documented the effects of surprise changes in the short‑term interest rate on a wide range of economic indicators. However, for the past few years, short‑term interest rates have effectively hit the zero lower bound so that the central bank can no longer lower its short‑term policy rate to stimulate demand. Instead, it has resorted to other tools, such as forward guidance or changes to the composition and size of the central bank’s balance sheet (“quantitative easing”). The Fed has used forward guidance extensively since the Federal Open Market Committee (FOMC) meeting on December 16, 2008, when it announced a commitment to low interest rates in the future, aiming to reduce long‑term bond yields and stimulate spending throughout the economy.

In “The Forward Guidance Puzzle,” a recent New York Fed staff report, we quantify the macroeconomic effects of central bank announcements about future federal funds rates, using an estimated dynamic stochastic general equilibrium (DSGE) model. (If you are interested in reading more about DSGE models, follow the link, or check out this primer.) Why bother with economic models to figure out the effects of forward guidance? Because looking at the behavior of the economy months following a policy announcement confounds the effects of policy with a multitude of other factors that affect the economy; a model is needed to isolate the effects of policy from those other factors. A further complication comes from the fact that when the FOMC announces that it expects to keep its policy rate exceptionally low for longer than market participants had anticipated, at least two things can happen. Either the market participants understand that the FOMC intends to maintain a very accommodative policy for longer than initially thought—in which case, people’s expectations about economic activity and inflation should rise—or, alternatively, they interpret the FOMC statement as revealing a deterioration of economic conditions, which should lead observers to lower their expectations of future economic activity and inflation, as emphasized by Campbell et al. (2012) and by Michael Woodford (2012) in his recent Jackson Hole speech. Again, a model is necessary to distinguish between these two channels.

DSGE models based on the work of Frank Smets and Raf Wouters and many others are in principle well suited to study the effects of forward guidance. These models have been found to fit the data reasonably well and to provide a good forecasting performance relative to that of private forecasters and reduced-form models such as VARs (see this study by Marco Del Negro and Frank Schorfheide and this Liberty Street Economics post). Most important, because these models represent laboratory economies, they can be used to study the impact of policy experiments never performed before.

However, while DSGE models are in principle useful in studying the economy’s response to forward guidance, they can greatly overestimate this response in practice (see also the evidence provided by Carlstrom, Fuerst, and Paustian). In our paper, we explore the reasons that the model-generated estimates fall wide of the mark. We are then able to adjust our model to produce reasonable estimates of the economic effects of forward guidance.

In the table below, the first row in the top and middle panels shows the baseline forecast for GDP and inflation, respectively, as of August 28, 2012. These forecasts are based on data through second-quarter 2012, as well as observations for the federal funds rate (FFR) and the Baa spread through the end of August. To incorporate the previously announced forward guidance, the baseline forecast is conditional on expectations that the model-implied FFR will equal actual market expectations for the subsequent eleven quarters. After that, the FFR is assumed to be set according to the policy rule that the model has estimated using data from 1984 on. The baseline forecast thus incorporates the market’s interpretation at the end of August of the forward guidance provided about future FFR through the end of 2014. This involves an FFR at 0.4 percent at the end of 2014 and at 0.6 percent in mid-2015. 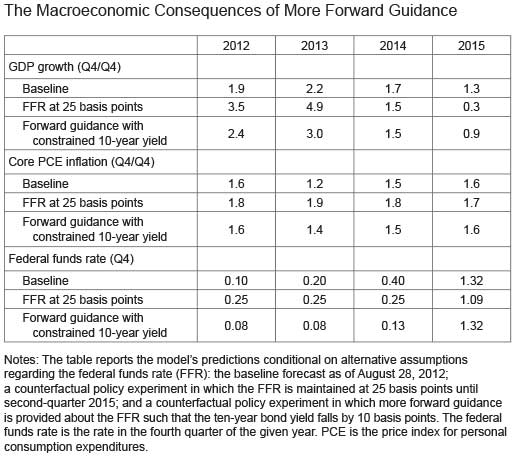 Now try extending the forward guidance in the model by announcing a commitment to maintaining the FFR in the 0 to 0.25 percent range until second-quarter 2015, that is, longer than the market was expecting on August 28. What do you get, according to the model? An unreasonably large stimulus, as shown in the second row of our table’s top two panels. Under this counterfactual experiment, Q4/Q4 GDP growth would jump from 1.9 to 3.5 percent in 2012 and would reach almost 5 percent in 2013.

The problem lies mostly in an over-reaction of long rates. The chart below shows that an extension of the forward guidance by two quarters would lead to large declines in expected short‑term rates far into the future. The blue solid line in the chart refers to the counterfactual experiment in which the FOMC commits to keeping the FFR low until second-quarter 2015. It shows that, as a result of this commitment, the short‑term interest rate is expected to deviate substantially from the baseline scenario for many years. Consequently, the model predicts a drop of 16 basis points in the five-year yield upon the announcement, and a larger decline in the ten-year yield, of as much as 25 basis points. These responses are, however, much larger than in recent experience. For instance, following the FOMC meeting of January 25, 2012, when the Committee reinforced forward guidance by announcing that it would keep the short‑term rate close to zero for an additional six quarters, five- and ten-year yields fell by only 8 and 7 basis points, respectively. 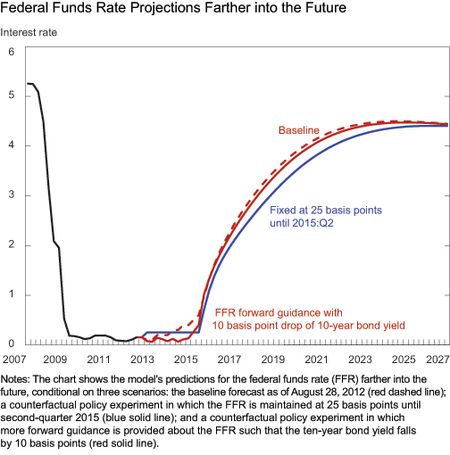 This finding suggests that the experiment conducted does not properly capture the effects of forward guidance considered by the FOMC. A possible way to obtain more plausible responses is to recognize that forward guidance provides more information about short‑term interest rates in the subsequent few years than about rates very far into the future. We thus consider an alternative experiment in which forward guidance is provided but the path of the FFR far in the future is constrained not to deviate too much from its initial path. This path of the policy rate limits the response of the ten-year bond yield so that the latter is “reasonable.” In light of the effect of the January 2012 announcement, we view 10 basis points as an upper bound for the ten-year bond yield response to an extension of the “lift-off” date by another two quarters.

When we do things this way, the outcome is much more reasonable. The chart below shows the model's predictions for real GDP growth, core PCE inflation, and the FFR conditional on alternative assumptions about the future path of the interest rate. The black solid lines show the historical data and the dashed red lines show the model's baseline forecast.

In sum, the experiments we have conducted with the DSGE model suggest that a policy-driven shift in FFR market expectations in the next few years would have sizable, though reasonable, effects on real GDP growth but only a modest impact on inflation.

Postscript: On September 13, 2012, the FOMC actually extended forward guidance through mid-2015, as in our counterfactual experiment. As always, controlled experiments are hard to come by in macroeconomics, and the FOMC statement of September 13 cannot—for a number of reasons—be characterized as a test of our theory. First, between August 28 (the date for which we collected market expectations for the baseline forecast) and September 13, the employment report was released. Because the news on employment was mostly bad, FFR market expectations had already adjusted to incorporate further accommodation on the part of the central bank prior to the September FOMC meeting. Moreover, the FOMC statement also contained language concerning additional long‑term asset purchases, as well as an indication that policy accommodation would continue until labor market conditions had improved. In general, it will always be hard, if not impossible, to test the predictions of DSGE models by looking at the outcome of policy counterfactuals such as the ones performed here: even if the counterfactual is implemented, it will not occur in a fully controlled environment. Nonetheless, we maintain that counterfactuals like the ones we have performed can assist policymakers in quantifying the potential effects of their policies, particularly when alternative approaches are lacking.

Marc Giannoni is a research officer in the Research and Statistics Group.

Christina Patterson is a senior research analyst in the Research and Statistics Group.
Posted by Blog Author at 07:00:00 AM in DSGE, Expectations, Fed Funds, Forecasting, Inflation, Monetary Policy

It honestly seems like an impossible job to measure the impact of a discrete policy change on so many other output variables. There are just so many other factors which contribute to the behavior of the economy as a whole I have a hard time grasping how any one factor's influence could be measured.

From my perspective - sometimes it is enough to understand whether the impact of a proposed policy change will be "good" or not. One of the best outcomes of the long range forward guidance policy is the removal of one element of uncertainty from the market. Sadly there has been far too much uncertainty in the market, uncertainty of events, acts of God, and unfortunately the inaction of government leadership.

Given current levels implied by the market this would be an average OIS of around 97 bp's... (OIS = IOER-13 bps)

It would seem as though this is a violation of the rule of Iterated expectations.. even if you were metaphysically sure that the FED would "end" its
low rate policy by March of 2015.. how do you get rates to average in expectations at 1.09 unless you are "certain" not only that they "begin" by March of 2015 but.. that conditional upon "moving" they move with certainty and at more than 25 bp's at a clip

As the ten Year note is nothing more than these annualy expectations strung forward one can see why one has to in expectations truncate any impact.. to do otherwise would implly that one knows today with certainty the future path of FED policy