Is Job Polarization Holding Back the Labor Market?

More than three years after the end of the Great Recession, the labor market still remains weak, with the unemployment rate at 7.7 percent and payroll employment 3 million less than its pre-recession level. One possibility is that this weakness is a reflection of ongoing trends in the labor market that were exacerbated during the recession. Since the 1980s, employment has become increasingly concentrated among the highest- and lowest-skilled jobs in the occupational distribution, due to the disappearance of jobs focused on routine tasks. This phenomenon is called job polarization (see Autor et al. [2003], Acemoglu and Autor [2010], Jaimovic and Siu [2011], and Abel and Deitz [2011]).

To study job polarization, it’s useful to put occupations into different task groups, with each occupation categorized as either routine or nonroutine. An occupation is routine if its main tasks require following explicit instructions and obeying well-defined rules. These tend to be middle-skilled jobs. If the job involves flexibility, problem solving, or creativity, it’s considered nonroutine. Job polarization occurs when employment moves to nonroutine occupations, a category that contains the highest- and lowest-skilled jobs. The chart below shows the employment share of routine and nonroutine jobs in the United States starting from 1976. The share of routine occupations declined from 60 percent in 1976 to 40 percent in 2012, resulting in job polarization. 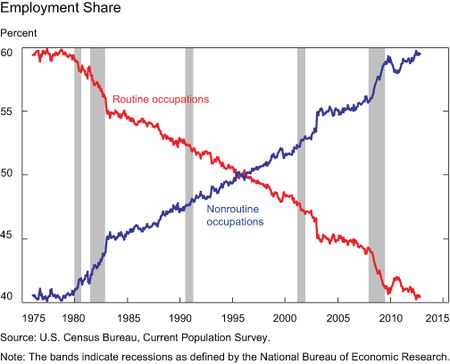 As the chart below shows, the share of routine jobs has been steadily decreasing for the cognitive and manual categories since the 1980s, and the decline accelerated during the 1981-82 and 2007-09 recessions. Most of the rise in the employment share of nonroutine jobs reflects the increase in cognitive nonroutine occupations.

The rise in job polarization during the most recent labor market slowdown can potentially account for why the labor market recovery has been sluggish. In particular, it can explain the persistently high unemployment rate and the rise in long-term unemployment. If this is the case, we should see weakness in the segments of the labor market that involve routine jobs. We examine this idea by looking at different labor market indicators for different occupation groups in the current labor market downturn. (See interactive charts for indicators for workers from different occupations at a more disaggregated level.) Foote and Ryan (2012) provide a detailed analysis of all recessions starting from 1976. Their results suggest that most of our findings for the recent downturn also apply to the earlier recessions. 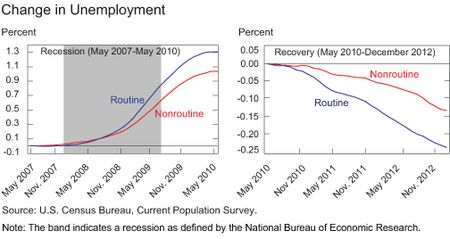 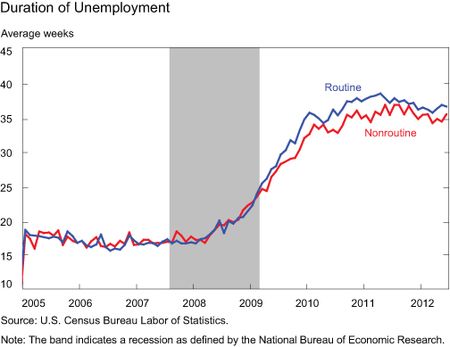 Job-finding rates. The main reason why the unemployment rate has been persistently high is the slow recovery of the rate at which unemployed workers find jobs. Job polarization can potentially explain this phenomenon if workers displaced from routine jobs have more difficulty finding employment than those displaced from nonroutine jobs. However, the chart below shows that this isn’t the case, and that all job-finding rates are recovering similarly. 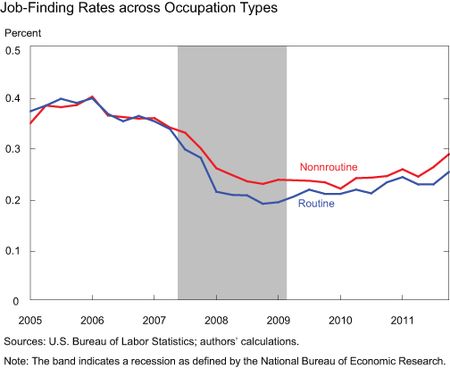 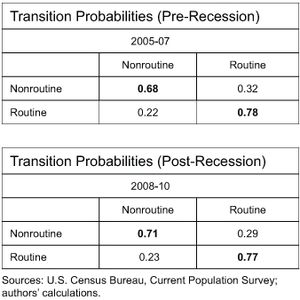 Our findings show that while job polarization is an important ongoing trend in the labor market, it’s not a key contributor to the sluggish labor market recovery. Our analysis suggests that the weakness in the labor market is broad based and not limited to a certain segment of the market.

The unemployment rates, average duration of unemployment, and the job-finding rates for workers from different occupations can be analyzed in these interactive charts.

Stefania Albanesi is a senior economist in the New York Fed’s Research and Statistics Group.


Victoria Gregory is a senior research analyst in the Research and Statistics Group.


Christina Patterson is a senior research analyst in the Group.

Ayşegül Şahin is an assistant vice president in the Group.
Posted by Blog Author at 07:00:00 AM in Employment, Labor Economics, Labor Market, Macroecon, Unemployment

While I agree with a lot of this you are missing a lot.

Many of us taught ourselves how to program computers after our military service simply because college courses did not exist back in the late 70's for what we were doing with these tools.

During the next 30 plus years we either built, or supported much of the infrastructure that runs our business community.

To the authors,
How did you conclude that job polarization isn't a key contributor to labor market recovery? The first three charts seem to indicate that there is a labor market shift towards more cognitive non routine jobs or the jobs that provide services to those same people.

Regarding occupational transitions, the job-finding rates further support the claim of job polarization being a key contributor.

"If people were unable to find routine jobs, they’d be incentivized to retrain and search for work in nonroutine occupations." - People look for jobs utilizing the skill they already have, very few have the resources to retrain. Probably fewer have the necessary educational background and financial capability to quickly gain new skills.

I don't think this article did a good job of disproving job polarization as a key contributor. The numbers used are lacking vital demographic data to support your claims.