« Historical Echoes: How to Choose a Bank, Past and Present | Main | Drilling Down into Core Inflation: Goods versus Services »

What Exactly Is this Link?
The RSSD ID is a unique identifier assigned to commercial banks or BHCs by the Federal Reserve; it’s the primary identifier of entities in regulatory reports, such as the call report (FFIEC031) and the FR Y9-C form. The PERMCO is a unique and permanent company identification number assigned to publicly traded institutions in the CRSP database. While a company may change its name, ticker, exchange, or CUSIP, the PERMCO remains the same. Linking the RSSD ID to PERMCO allows researchers to match bank regulatory data with financial market data.

How Does the New York Fed Assemble these Linked Data?
After academics expressed interest in the data, the New York Fed first posted the link in 2007, based on internal data sets. The matching methodology until 2007:Q4 was based on a hand-match of all banks in the December volume of the SNL Bank Quarterly for 1990-2006. The Bank Quarterly contained geographic and financial data for publicly traded banks and BHCs on a quarterly basis. It provided market data on banks traded on the NYSE, AMEX, and NASDAQ, as well as on entities traded on the OTC Bulletin Board and Pink Sheets beginning in 2001.

After the Bank Quarterly was discontinued in 2006, researchers developed a new methodology to match banks’ RSSD IDs to PERMCOs based on name, city, and state, as well as balance sheet variables. This algorithm is repeated each year, and matches are confirmed by hand. Detailed information on the matching algorithm is available via the data link. Public and Private Banks
The link can also be used to compare banks with public equity and those with private equity. In this post, we look at the larger BHCs that file Y-9C forms. Of the 1,131 that filed the 2012:Q3 Y-9C and are headquartered in the United States, approximately one-third have publicly traded equity. We compared 398 public banks matched in this link with 733 private banks.

As shown in the following charts, while there are fewer public banks, they’re dramatically larger than the private institutions in aggregate, although this mostly reflects the huge size of the biggest public banks. 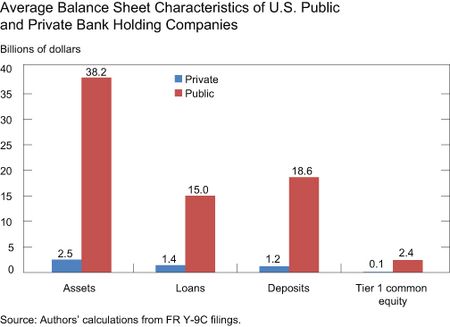 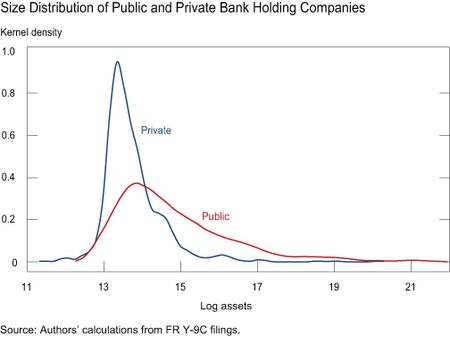 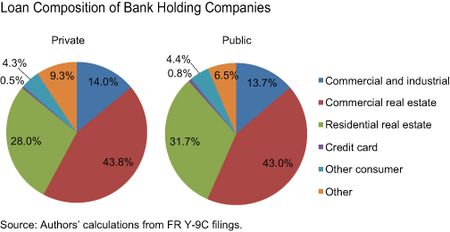 From a liability perspective, on average, public banks have similar amounts of Tier 1 capital as a percentage of assets, and deposits are a lower percentage of their liabilities. 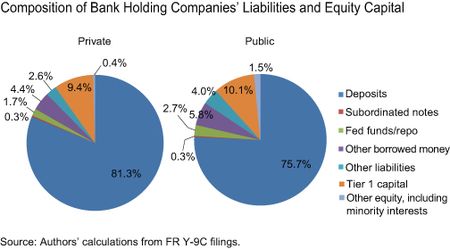 Public and private banks appear remarkably similar from an earnings perspective, with both types of banks earning a 0.2 percent return on assets (ROA) in the third quarter. The variability of their returns, as measured by the standard deviation of ROA in the preceding four quarters, is also similar on average. Additionally, public and private banks have similar efficiency ratios and leverage ratios on average. 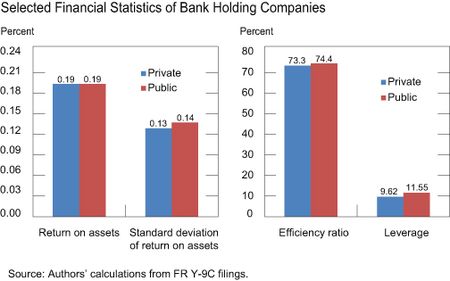 One difference between public and private banks appears to be geography—public banks are located closer to New York City and appear to be more prevalent on the coasts in general. 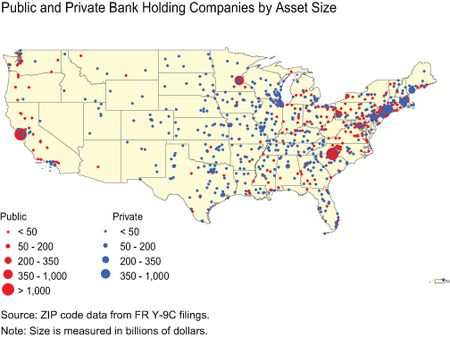 Anna Kovner is a senior economist in the New York Fed’s Research and Statistics Group.

Phoebe White is a senior research analyst in the Group.

Lily Zhou is a senior research analyst in the Group.
Posted by Blog Author at 07:00:00 AM in Corporate Finance