Crisis Chronicles: The “Not So Great” Re-Coinage of 1696 -Liberty Street Economics

« Historical Echoes: The Changing Face of Education in the United States | Main | Capital Flight inside the Euro Area: Cooling Off a Fire Sale »

A Bi-metallic Primer
A bi-metallic standard is a monetary system consisting of two metals—usually gold and silver— where the government or the mint fixes the price between the two metals. As a hypothetical example, the mint might determine that 1 ounce of gold = £1 and 1 ounce of silver = 1¢. Therefore, 1 ounce of gold = 100 ounces of silver. The key to making a bi-metallic standard successful is two-fold. First, the mint and the public must be willing to buy or exchange 100 silver coins for a gold coin, and vice versa. This is called maintaining mint price parity. But just as importantly, the mint must be willing to buy gold and silver bullion from the commodity markets for £1 per ounce of gold and 1¢ per ounce of silver, respectively. This is called maintaining market price parity to the mint price. If external forces change the market price of the underlying metal—for example, if a gold rush causes gold to flood the market, forcing the market price for gold down—the mint must decide whether to continue buying gold bullion at an inflated price or to change the fixed rate between the gold and silver coins through a re-coinage.


The Ill State of the Coin of the Kingdom
In the late 1600s, coin was still struck manually, so the quality of coin production was low and off-struck coin—coin that was not precisely centered when it was minted—was both common and generally accepted. (The image below shows a heavily clipped and off-struck Elizabeth I silver sixpence minted from 1569 that was still in circulation in 1696.) 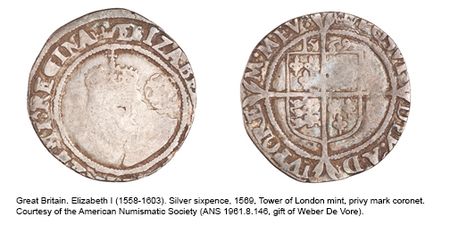 When the market price of silver began to rise in the 1690s relative to the mint price, silver started flowing from England to the European Continent. So while the difference between the mint price and the market price fueled the incentive to clip silver coin and sell the clippings in the continental commodity markets, the poor mint quality made it even more difficult to detect a clipped coin, leading to a situation reminiscent of the Kipper und Wipperzeit crisis of the 1620s described in our earlier post. At the same time, the Royal Mint was paying more than market price for gold bullion, so gold bullion began to flow from the Continent to England.

By 1695, high-value gold coins were plentiful in England but there was a notable shortage of small-denomination silver coins, creating a monetary contraction. This led to a dual problem. First, the monetary contraction inhibited the ability to pay the armies engaged in the Nine Years’ War. Second, because silver was used for small-denomination subsidiary coins, the coin shortage impeded everyday transactions between individuals. The Bank of England did not have the authority to intervene in the markets, so a “Commission on the Coinage” was chartered from 1694 to 1695 to deal with the crisis. These developments set the stage for what economist Charles Larkin called “one of the great monetary events in history” in his work The Great Re-Coinage of 1696. During the Commission’s debates, many solutions to the crisis were proposed: Treasury Secretary William Lowndes favored devaluation, Treasury advisor Charles Davenant advocated the expansion of credit, and Royal Mint Master Sir Isaac Newton sought to achieve gold and silver mint price parity. Ultimately, a plan to demonetize the existing clipped coins and issue new, full-weight coins—put forward by Commission member and prominent philosopher John Locke—was approved. The William III silver sixpence shown below was minted in 1696 as part of the great re-coinage. It displays the milled edges introduced around 1662 in an effort to reduce clipping.

A Classic Bank Run for Specie
In January 1696, the Act for Remedying the Ill State of the Coin of the Kingdom stipulated that by May 4, clipped coin would no longer be legal tender, and by June 24, clipped coin would no longer be accepted for tax payments. But the Royal Mint was woefully unprepared to replace the monetary base and had only minted about 15 percent of the silver coin needed for the exchange. Compare this to the preparation for issuing the euro, when European central banks stockpiled roughly 350 coins per capita in anticipation of the euro launch. While the milled-edge design used in the re-coinage prevented further coin clipping, it didn’t address the ongoing attack on silver coinage by seventeenth-century arbitrageurs and the continuing silver outflows. These problems resulted in depositors flocking to the Bank of England on May 4 to demand specie. By May 6, the Bank of England was forced to forestall debt payments, and it was not able to resume payments until October, when it received a loan from the Dutch government.

In the second half of 1696, England’s economy essentially stopped, and the ensuing monetary contraction led to massive unemployment, poverty, and civil unrest. The smallest gold coin, the golden guinea, and various forms of credit provided the only remaining liquidity in the market, with the Duke of Beaufort famously being forced to pay for a dinner by entering his name in a book at the height of the crisis. The crisis ultimately spurred a new era of economies driven by a broad set of financial instruments, not just specie, and laid the foundations for the later development of “fiat money,” which is backed by full faith and credit in the issuing government, as we’ll explore in a future post on the Continental Currency Crisis.

So, how great was the great re-coinage? Tell us what you think.

David Skeie is a senior economist in the Bank's Research and Statistics Group.
Posted by Blog Author at 07:00:00 AM in Crisis Chronicles , Economic History, Monetary Policy