Capital Flight inside the Euro Area: Cooling Off a Fire Sale

Countries in the euro area periphery such as Greece, Italy, Portugal, and Spain saw large-scale capital flight in 2011 and the first half of 2012. While events unfolded much like a balance of payments crisis, the contraction in domestic credit was less severe than would ordinarily be caused by capital flight of this scale. Why was that? An important reason is that much of the capital flight was financed by credits to deficit countries’ central banks, with those credits extended collectively by other central banks in the euro area. This balance of payments financing was paired with policies to supply liquidity to periphery commercial banks. Absent these twin lifelines, periphery countries would have had to endure even steeper recessions from the sudden withdrawal of foreign capital.

Foreign private investors were in full retreat from periphery markets in 2011 and through the first half of 2012. For example, as shown in the table below, foreign investors sold off €224 billion in Spanish assets over this period. (These sales are listed as negative values under “Inflows.”) Foreign investors also made sizable liquidations of assets in Greece, Italy, and Portugal, bringing the total to €516 billion. More detailed data would show that the pullback was largest for portfolio assets, a broad category that includes sovereign bonds and notes and private security instruments other than derivatives. Foreign investors also liquidated sizable investments in bank loans and other periphery assets. Meanwhile, periphery investors added to the net capital outflow by buying additional foreign assets. The result was to boost the net value of private funds exiting the periphery to some €677 billion. A similar rush to the exits by foreign investors, after an earlier period of abundant financial inflows, has set off many past balance of payments crises in countries committed to a fixed or managed exchange rate. 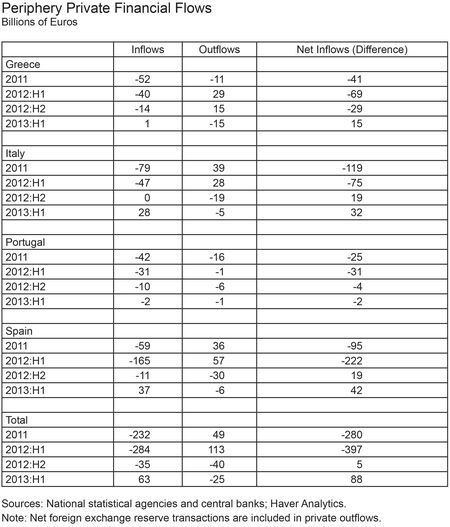 Capital flight largely ended over the summer of 2012, with investors taking heart from European Central Bank (ECB) President Draghi’s statement in July that the bank stood ready to do “whatever it takes” to support the euro. This was followed by the announcement in August of the Outright Monetary Transactions program, under which the ECB could provide a backstop for periphery sovereign bond markets for countries in compliance with European Stability Mechanism fiscal adjustment or precautionary programs. For the second half of 2012 as a whole, sales by foreign investors shrank to just €35 billion, while periphery investors shifted to selling some of their foreign holdings and bringing the proceeds home. The result was to leave the periphery with a small net capital inflow of €5 billion. Foreign investors made a tentative return to periphery markets during the first half of this year.

How were periphery countries able to finance nearly €700 billion in capital flight in 2011 and the first half of 2012? Part of the answer is that official adjustment loans provided much of the needed financing for Greece and Portugal while financing for Spain and Italy came largely or entirely from Target2, the euro area settlement system. In particular, the Target2 system automatically extends cross-border payments credits to central banks in countries where capital flight is causing an outflow of commercial bank reserves.

A more complete answer requires a review of how private capital flows fit into the overall balance of payments. Transactions are broken down into two categories: the current account, for transactions in goods and services, and the financial account, for investment and lending transactions. By construction, the current and financial accounts should sum to zero. (Discrepancies in reporting and the generally trivial capital account mean that this doesn’t hold exactly.) After all, a country that imports more than it exports is spending above its income and must attract an inflow of foreign financing to make up the difference.

The table below summarizes the financial account transactions, placing data on net official inflows alongside the data on net private inflows discussed above. (Thus, the first column in the table repeats the third column in the previous table.) Official flows are divided into two categories: adjustment assistance provided to periphery countries by European Union institutions and the International Monetary Fund, and payments credits provided collectively by central banks elsewhere in the euro area via Target2. 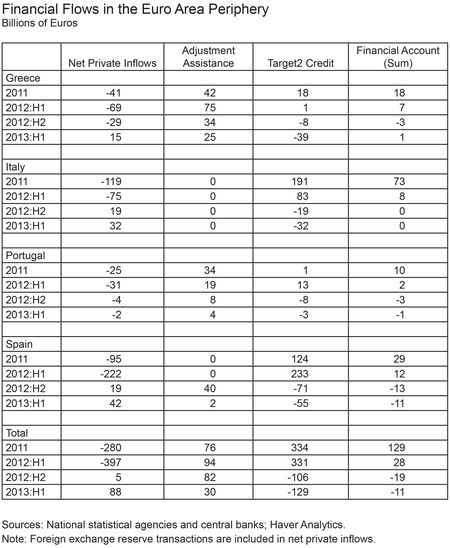 Consider developments in Greece in 2011 and the first half of 2012. Over the period, the country received a net infusion of foreign capital, running a financial account surplus totaling €25 billion. Yet private investors pulled €110 billion out of the country, for a financing gap of €135 billion. The bulk of the gap was filled by €117 billion in adjustment loans from European Union institutions and the International Monetary Fund. The remainder, or some €19 billion, was filled by Target2 credits.

Italy and Spain also ran positive financial account balances in 2011 and the first half of 2012, despite a massive pullback on the part of foreign private investors. For these countries, however, the resulting financing gap was filled almost entirely by Target2 credits, totaling €274 billion in Italy and €358 billion in Spain. All told, periphery countries were extended €665 billion in Target2 credits over the period, about four times the scale of official adjustment assistance.

The mechanics of Target2 transactions can be explained by example. When a Spanish resident writes a check to a German company to make a purchase, the check is cleared via a transfer of bank reserves (clearing balances) from the Spanish commercial bank to the German bank. The transfer is accomplished through a matching central bank transaction within the Eurosystem, the umbrella organization for euro area central banks. In our example, the Bundesbank would acquire a claim on the Eurosystem and the Banco de España would incur an equal liability. A country’s Target2 balance over a given period is simply the net sum of all payment flows involving other euro area countries. The extension of Target2 credit is automatic.  There are no provisions for settling Target2 balances and no restrictions on their size.

Spain currently has the largest accumulated liability position in Target2, at €281 billion, with Italy next in line at roughly €223 billion (see chart below). Liability positions elsewhere in the periphery are also sizable. The corresponding credit position is held largely by the Bundesbank, with central banks in Luxembourg and the Netherlands also holding substantial credits. However, Target2 balances have receded since last summer, in line with the end of capital flight from the periphery described above. 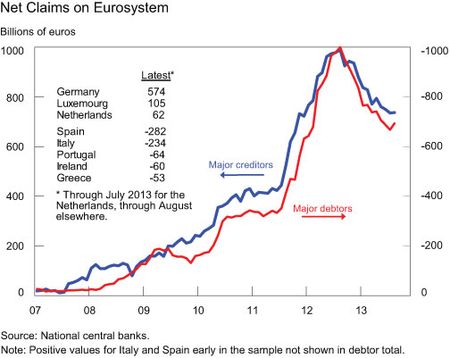 The availability of open-ended payments credit, as available under Target2, is part of the infrastructure needed to support a multi-country currency union.  Limits on Target2 liabilities would amount to a potential stop payment order on cross-border transactions.  Once the limit was reached, checks drawn on banks in the affected country would no longer be valid elsewhere in the euro area.  Countries could hardly be said to share a common currency under such an arrangement.

Absent policy action, the outflow of commercial bank reserves would have translated into shrinking banking systems in the periphery. To forestall a severe credit crunch, periphery central banks expanded their refinancing operations, creating new bank reserves for commercial banks against pledged collateral.  ECB policy changes have helped to support expanded refinancing.  In particular, the ECB has acted several times to widen the eligible collateral pool. (Under the euro area’s decentralized system, major policy decisions are made collectively, but central bank credit operations are carried out at the national level.) The effects of these actions are evident in the chart below. The jump in central bank credit to commercial banks was most pronounced in Spain and Italy, the countries seeing the largest bank reserve outflows. 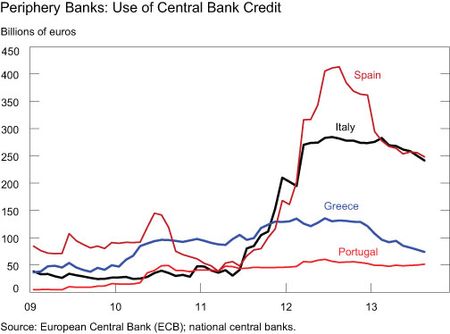 The risk to the Eurosystem from cross-border imbalances is limited by the collateral posted in refinancing operations.  In accordance with Eurosystem rules, central banks book collateral at current market value, with local commercial banks subject to margin calls to offset drops in market value. In addition, substantial haircuts are applied to lower-rated securities.  Any losses would be shared by the Eurosystem as a whole rather than by creditor central banks.  The Bundesbank, for example, would bear roughly 27 percent of any losses, in line with its share in the Eurosystem.

Central banks not in a monetary union but committed to a fixed exchange rate face far sharper constraints in handling payments imbalances. In particular, capital flight forces the central bank to expend scarce foreign exchange reserves—the holdings of dollars and other hard currencies needed for settling international transactions.  When foreign reserves run too low, the central bank can no longer defend the current fixed rate, and must devalue the domestic currency or move to a flexible exchange rate regime.

As a related matter, central banks committed to an ordinary fixed exchange rate also have little ability to counteract the credit tightening caused by capital flight.  Suppose, for example, that the central bank were to supply new reserves to commercial banks by purchasing or refinancing additional domestic assets.  Banks would now have the liquidity to meet ongoing payments outflows.  But by providing additional fuel for capital flight, such an action would simply make the central bank’s foreign exchange constraint bite occur sooner.

Thomas Klitgaard is a vice president in the Research and Statistics Group.
Posted by Blog Author at 07:00:00 AM in Balance of Payments, Credit, Crisis, Euro Area, Exchange Rates, Exports, Fire Sale, International Economics