Twenty-Eight Money Market Funds That Could Have Broken the Buck: New Data on Losses during the 2008 Crisis -Liberty Street Economics

« What’s News? | Main | Historical Echoes: Throwing Coins into a Fountain—Who Is Getting Paid? »

Twenty-Eight Money Market Funds That Could Have Broken the Buck: New Data on Losses during the 2008 Crisis

During the financial crisis in 2008, just one money market fund (MMF) “broke the buck”—that is, its share price dropped below one dollar. The Reserve Primary Fund announced on September 16 that the value of its shares had dropped to 97 cents. As we discussed in a previous post, Reserve’s announcement helped spark a widespread, damaging run on MMFs that slowed only when the federal government intervened three days later to backstop the funds.

But new data that we first published in a New York Fed staff report and discussed in a Brookings paper show that at least twenty-nine MMFs had losses large enough to cause them to break the buck in September and October 2008 despite significant government intervention and support of the sector. Five funds or more experienced losses exceeding the 3 percent reported by Reserve, and one fund reported a loss of nearly 10 percent. Among the twenty-nine funds that would have broken the buck without sponsor support, the average loss was 2.2 percent.

Yet, the losses for twenty-eight of these MMFs may have gone unnoticed during the crisis, as neither their shareholders nor almost anyone else could have observed their magnitudes at the time. As in other episodes in which MMFs suffered significant losses, the losses were absorbed—and hence obscured—by voluntary financial support from MMF sponsors (the MMFs’ asset management firms or their parent companies). The extensive record of sponsor support for MMFs does allow us to look back to the 2008 crisis and other periods of strain for indirect evidence about funds’ losses. In a 2010 report, Moody’s found 144 cases in which U.S. MMFs received support from sponsors between 1989 and 2003. Brady, Anadu, and Cooper (2012) documented 123 instances of support for seventy-eight different MMFs between 2007 and 2011, including thirty-one cases in which support was large enough that it probably was needed to prevent funds from breaking the buck. Still, these data only allow estimates of what MMF losses must have been to motivate sponsors’ actions.

In contrast, the data we describe are market-based values of MMF portfolios reported confidentially by the funds themselves during the crisis to the Department of the Treasury (“Treasury”) and the Securities and Exchange Commission (SEC). In general, these “shadow” net asset values (NAVs) are invisible to investors and the public, as MMFs are permitted to round their reported share values to $1 so long as the shadow NAV remains above $0.995. Only if the shadow NAV drops below that threshold does the fund break the buck—unless it receives sponsor support. During the crisis, many MMFs did receive such support, so their shadow NAVs remained invisible. However, any MMF with a shadow NAV below $0.9975 that participated in Treasury’s Temporary Guarantee Program for MMFs was required to report to Treasury and the SEC what its shadow NAV would have been without some forms of sponsor support, such as capital support agreements. Since virtually the entire industry participated in the program, these data provide an unprecedented record of MMFs’ portfolio losses at the time.

Even so, the NAV data do not reflect the full extent of losses that might have occurred without sponsor interventions. Some of the reported shadow NAVs were likely boosted by common forms of sponsor support, such as direct cash infusions and sales of securities to sponsors at above-market prices. Of course, the data also do not reflect portfolio losses that might have occurred in the absence of Treasury’s guarantee program and other government support for MMFs in 2008.

In the table below, line 1 shows that seventy-two MMFs reported shadow NAVs at least once from September 5 to October 17, 2008, indicating that their shadow NAVs dipped below $0.9975 at some point in this period. Although some funds reported data daily, all funds with shadow NAVs below $0.9975 were required to report at least weekly, and the number of reports jumped each Friday. Line 1 lists the number of funds reporting shadow NAVs on each Friday, which ranged from nineteen to sixty-three. Line 2 shows that on most Fridays the majority of reporting MMFs had shadow NAVs of $0.9975 or less. 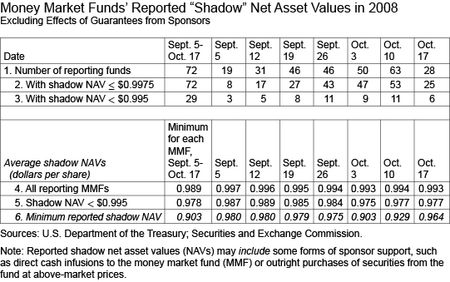 Twenty-nine MMFs reported a shadow NAV below $0.995—low enough to break the buck, absent sponsor support—at some point during this episode (line 3). As many as eleven MMFs on any particular Friday reported shadow NAVs below 99.5 cents, including five funds that reported NAVs below this level before the Lehman Brothers bankruptcy. Average shadow NAVs for all reporting funds, excluding the effects of guarantees, dropped to $0.993 on October 3 and October 17 (line 4). Among funds with NAVs falling below $0.995 at some point, minimum shadow NAVs averaged $0.978 (line 5, column 1). That is, these funds lost, on average, at least 2.2 percent during the crisis.

These new data on shadow NAVs represent a significant contribution to our understanding of MMF risks and the 2008 crisis. By lifting the veil of sponsor support, the data reveal how large and extensive MMF losses actually were. Indeed, one fund reported an NAV of $0.903, almost 10 percent below its “stable” $1 NAV! This information is useful for designing reforms to mitigate the risks that MMFs pose to financial stability. For example, the magnitudes of potential losses are important for calibrating the size of a capital buffer or minimum balance at risk to protect MMFs from runs.

The scale and scope of the losses in 2008 also highlight the significance of sponsor support for MMFs. After all, what made the Reserve Primary Fund unique in 2008 was neither its exposure to Lehman Brothers nor its portfolio losses, but the fact that its sponsor could not absorb its losses. However, the industry’s reliance on implicit recourse to sponsors is systemically risky because it creates channels for transmitting destabilizing strains between sponsors and their “off-balance-sheet” MMFs, and because uncertainty about whether sponsors will come to funds’ rescue may precipitate runs (McCabe 2010). Hence, the data we have described underscore the need for robust and effective MMF reforms that would provide a form of stability to the MMF industry not predicated on voluntary and uncertain support from sponsors.

Marco Cipriani is a senior economist in the Federal Reserve Bank of New York’s Research and Statistics Group.

Patrick E. McCabe is a senior economist at the Board of Governors of the Federal Reserve System.
Posted by Blog Author at 07:00:00 AM in Fed Funds, Financial Institutions