« Has the Fed Stabilized the Price Level? | Main | Introducing the FRBNY Survey of Consumer Expectations: Survey Goals, Design, and Content »

The fed funds market is important to the framework and implementation of U.S. monetary policy. The Federal Open Market Committee sets a target level or range for the fed funds rate and directs the Trading Desk of the New York Fed to create “conditions in reserve markets” that will encourage fed funds to trade at the target level. In this post, we use various publicly available data sources to estimate the size and composition of fed funds lending activity. We find that the fed funds market has shrunk considerably since the financial crisis and that lending activity is now dominated by one group of market participants.


Data on the U.S. Fed Funds Market
The fed funds market consists of unsecured loans of U.S. dollars among depository institutions and certain other eligible entities, including government-sponsored enterprises (GSEs). It’s no easy matter to gauge the size of the market, as comprehensive data aren’t available. However, we can estimate its size and composition by aggregating data from publicly available regulatory filings, such as the FR Y-9C, call reports, and 10-Qs. We collect information from hundreds of institutions and use data from the highest level of each organization to avoid double counting. Although we can’t obtain a complete view of the market, our conversations with market participants suggest that these reports capture most fed funds transactions.


Size of the Market
Our estimates suggest that fed funds lending activity has decreased significantly since the beginning of the financial crisis. As shown in the chart below, at the end of 2012 institutions reported lending over $60 billion in fed funds—compared with over $200 billion in 2007.

Several factors have contributed to this decline in trading volume. For one, the expansion of the Federal Reserve’s balance sheet since late 2008 has elevated the level of excess reserves in the banking system. This has reduced the need for many institutions to borrow fed funds to meet reserve requirements and to clear financial transactions. Also, in the fall of 2008 Federal Reserve Banks began paying interest on excess reserves (IOER) to depository institutions. The payment of such interest has reduced the incentives for depository institutions to lend (sell) fed funds at rates below IOER. 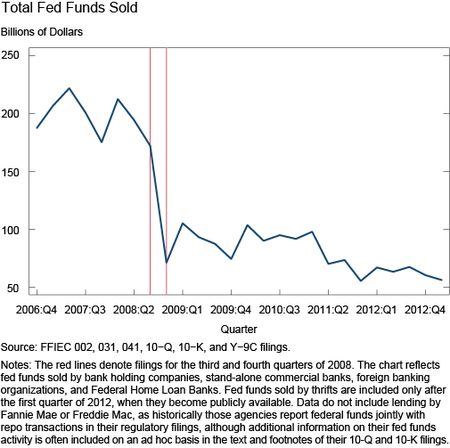 In this new environment, who’s lending in the fed funds market? Data suggest that depository institutions, which accounted for more than half of fed funds sold precrisis, now account for a relatively small share of lending activity. Specifically, bank holding companies (BHCs), standalone commercial banks, foreign banking organizations (FBOs), and thrifts represented 26.3 percent of the total lending market at the end of 2012, compared with nearly 60 percent in the fourth quarter of 2006.

Under the current trading dynamics of the market, the primary sellers of fed funds are institutions not eligible for IOER, specifically GSEs. While some have attributed lending activity to Fannie Mae and Freddie Mac, financial statements indicate that those firms reduced their fed funds participation in 2011 and haven’t been active in recent quarters. If not depository institutions, Fannie Mae, or Freddie Mac, then, who’s lending in the fed funds market?


Federal Home Loan Banks
Created by Congress during the Great Depression to support financing for housing and economic development, the Federal Home Loan Bank (FHLB) System comprises twelve regional cooperative banks. The FHLBs serve as financial intermediaries to their members, which include banks and certain other institutions. A key component of the FHLB business model is funding to members through collateralized loans known as “advances.”

FHLBs play a key role in fed funds lending, accounting for almost 75 percent of total lending in the last quarter of 2012. Financial statements indicate that, historically, each of the twelve FHLBs has participated in the fed funds market to varying degrees. As shown in the dynamic chart, the share of fed funds sold by FHLBs has increased significantly since the end of 2006, from close to 40 percent in the fourth quarter of 2006 to almost 75 percent at the end of 2012, down from a peak of 83 percent in the fourth quarter of 2010.

The predominant lending role of the FHLBs helps explain why the fed funds effective rate has largely printed below IOER. As the FHLBs aren’t eligible to earn IOER, they have an incentive to lend in the fed funds market, typically at rates below IOER but still representing a positive return over leaving funds unremunerated in their Federal Reserve accounts. Institutions have an incentive to borrow at a rate below IOER and then hold their borrowed funds in their reserve account to receive IOER and thus earn a positive spread on the transaction.

Given the importance of the fed funds market to U.S. monetary policy, an understanding of the shift in fed funds trading dynamics in recent years and the role played by FHLBs is essential to future policy and research.

Several factors may have contributed to why there is a gap between the effective fed funds rate and IOER. While some banks take advantage of the arbitrage opportunity, others point to balance sheet costs and counterparty frictions as constraints on this activity. In a recent speech on monetary policy implementation (http://www.newyorkfed.org/newsevents/speeches/2013/pot131202.html), Simon Potter discussed in more detail some reasons why fed funds rates have not converged to the IOER rate. On your second question, an interactive chart on fed funds borrowers will be available on Monday in our follow-up post, “Who’s Borrowing in the Fed Funds Market?” Finally, lowering IOER to zero (http://libertystreeteconomics.newyorkfed.org/2012/12/why-or-why-not-keep-paying-interest-on-excess-reserves.html) could impact the fed funds market by reducing arbitrage opportunities available to borrowers, potentially decreasing the amount of trading activity.

Why has arbitrage not been able to converge the gap between Fed Funds and IOER?

Do you have an interactive chart of Fed Fund Borrowers?

Finally what kind of effect would the elimination of IOER have on the Fed Funds market?