What Makes a Bank Stable? A Framework for Analysis -Liberty Street Economics

What Makes a Bank Stable? A Framework for Analysis

One of the major roles of banks and other financial intermediaries is to channel funds from savings into valuable projects. In doing so, banks engage in “liquidity and maturity transformation,” since they finance long-term, illiquid projects while funding themselves with short-term, liquid liabilities. By performing this important role, banks expose themselves to the risk of runs: If depositors or other short-term creditors worry about their claims, they may withdraw funds en masse and cause the bank to fail. The recent financial crisis once again highlighted the fragility associated with financial intermediaries performing the roles of maturity and liquidity transformation. This post draws upon our paper “Stability of Funding Models: An Analytical Framework” to illustrate the determinants of a financial intermediary’s ability to survive stress events.

We use a simple framework, where the bank has the following balance sheet:

On the asset side of the balance sheet, the bank has cash and risky assets, for example, loans to companies. The main feature of cash is that it’s safe – one dollar is always worth one dollar. The risky assets are different in two important ways: First, their value is uncertain (some borrowers may default on their loans); second, the risky assets are long-term investments. If the bank has to raise money quickly, it has to sell its loans. Potential buyers, such as other banks, may not know the companies as well and therefore may not be willing to pay face value for the loan. Hence, asset sales entail liquidation costs. On the liability side, the financial intermediary has equity that acts as a buffer against losses, long-term debt that has the same maturity as the risky assets, and short-term debt that can be rolled over or redeemed earlier.

When some short-term creditors don’t roll over their claims, the financial intermediary pays them using cash first; if cash isn’t enough, the intermediary starts to liquidate some of the risky assets, which is costly. In our framework, the intermediary can fail for two main reasons: 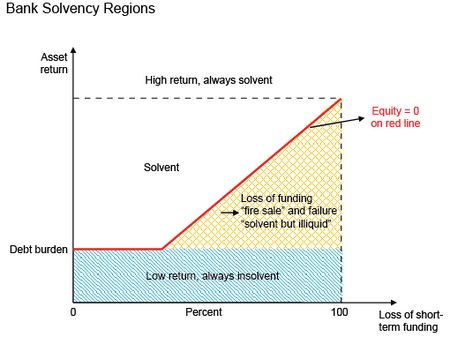 The diagram has four main regions for different combinations of asset return and loss of funding. At one extreme, when the asset return is very high (the area above the dashed line), the bank can stay solvent, even if it loses all short-term funding and needs to liquidate some of the risky assets at a cost. At the other extreme, when the asset return is very low (the blue area), even if all short-term creditors roll over their debt, the bank can’t cover its debt burden and is “fundamentally insolvent.”

Interesting cases arise for intermediate values of the asset return, where the intermediary’s ability to stay solvent depends on how much short-term funding it loses. For an intermediate asset return, if few creditors refuse to roll over their claims, the bank doesn’t have to sell too many assets and can stay solvent. If, however, for the same asset return, too many creditors refuse to roll over their claims, the bank suffers significant liquidation costs and becomes insolvent. In the diagram, the red line represents the solvency threshold. Below and to the right of the red line, due to low asset returns or significant loss of short-term funding, the bank has negative equity and becomes insolvent (the shaded triangle). Banks in this situation are also referred to as “solvent but illiquid,” since they could have stayed solvent in principle, but due to the illiquidity of their assets the loss of short-term funding forces them into insolvency.

Posted by Blog Author at 07:00:00 AM in Crisis, Financial Institutions, Financial Markets, Liquidity