This post is the fourth in a series of six Liberty Street Economics posts on liquidity issues.

Liquidity transformation—funding longer-term assets with short-term liabilities—is one of the main functions that banks provide. However, this liquidity mismatch exposes banks to liquidity risk. This risk was clearly demonstrated in the 2008 financial crisis when banks’ funding liquidity dried up and their market liquidity evaporated. Since the crisis, liquidity risk management has become one of the top priorities for regulators, and new liquidity requirements, such as the Liquidity Coverage Ratio and the Net Stable Funding Ratio, have been proposed in Basel III, apart from conventional capital requirements. In this post, we present a new measure of liquidity mismatch—the liquidity stress ratio (LSR). We analyze how it has evolved for large banks, and study the correlation between the LSR and key bank characteristics over time.


Aggregate Liquidity Stress Ratio
To get a sense of how LSR has evolved for large banks, we look at the historic transition of aggregate LSR for fourteen of the eighteen CCAR (Comprehensive Capital Adequacy Review) firms. (For consistency, we exclude the four firms that became BHCs in 2009:Q1: Goldman Sachs, Morgan Stanley, American Express, and Ally Financial). The chart below shows that the liquidity mismatch increased during the period leading up to the crisis and peaked in 2007:Q1. It is also notable that the LSR measure began to improve even during the crisis, then declined rapidly after 2008:Q1. This is because banks were forced to adjust their balance-sheet liquidity during this period by selling illiquid assets and switching to longer-term liabilities due to the dry-up of short-term debt financing. These balance sheet adjustments eased liquidity stress substantially as a result. The chart below shows the decomposition of LSR into asset, liability, and off-balance-sheet components. Most of the improvement in liquidity mismatch after 2008:Q1 is driven by asset-side improvements, attributable mostly to increased cash holdings (which could be related to the Federal Reserve’s liquidity injections). Off-balance-sheet liquidity exposures, such as unused loan commitments and securities lending, also saw a marked decline after 2008:Q1. 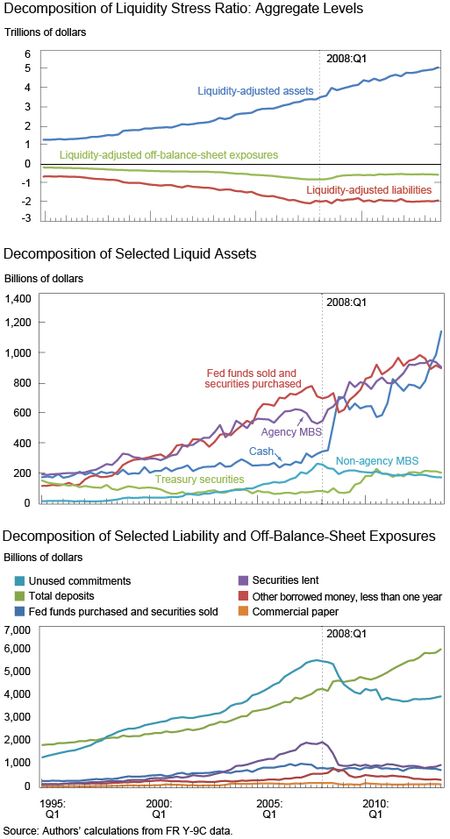 Cross-Sectional Analysis: Liquidity Stress Ratio and Risk-Taking
Looking at the cross-section for all eighteen CCAR banks, we first study the relationship between Tier 1 common capital ratios and liquidity stress ratios. The first chart below shows that the LSR is positively correlated with Tier 1 common capital ratios after the crisis. Since capital ratios improved significantly after the crisis, this would mechanically imply a lower measure of LSR because Tier 1 common capital is considered a stable funding source. However, the positive relationship may indicate that when banks are less vulnerable to undercapitalization, they take more liquidity risk. In other words, capital and liquidity may act as substitutes. Interestingly, this relationship is only observed after the crisis, as can be seen in the second chart below. Next, we look at the correlation between credit risk-taking, as measured by a firm’s percentage of risk-weighted assets to total assets, and liquidity risk-taking. The LSR and credit risk are negatively correlated, suggesting that the two risks may be substitutes. 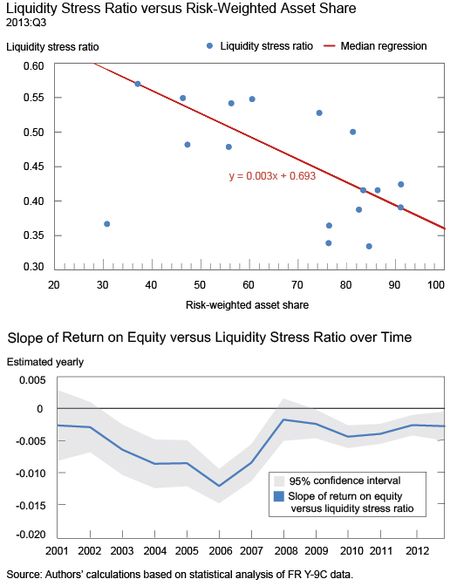 Cross-Sectional Analysis: Liquidity Stress Ratio and Profitability
Finally, we ask if holding liquidity is costly. If so, then returns should be lower for more liquid banks. However, this does not seem to be the case. We see no correlation between realized return on equity, our measure of profitability, and LSR. 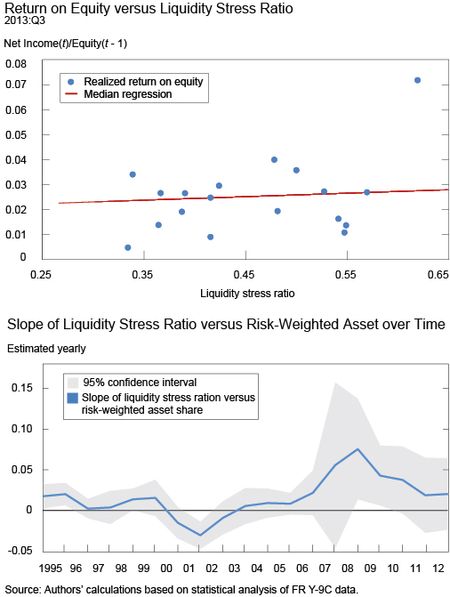 Conclusion
It should be noted that our cross-sectional analysis is run only on a small number of large banks and does not necessarily imply a causal relationship between liquidity risk and the selected bank characteristics we studied. Also, because the LSR is constructed with publicly available data, our liquidity adjustment categorization is less granular than that used in the Basel proposals. Nevertheless, the LSR is useful for macro-prudential purposes, as it can be used to quantitatively describe the liquidity condition of the banking sector and may offer an early warning signal of a liquidity crisis. Furthermore, this measure can shed light on the relationship between bank capitalization and liquidity; it suggests that liquidity requirements should supplement conventional capital requirements if risk-taking and liquidity are indeed substitutes.


At the time this post was written, Lily Zhou was a senior research analyst in the Bank’s Research and Statistics Group.
Posted by Blog Author at 07:00:00 AM in Financial Institutions, Liquidity, Regulation