Do Currency Forwards Say Anything about the Future Value of the U.S. Dollar? -Liberty Street Economics

« The Capitol Since the Nineteenth Century: Political Polarization and Income Inequality in the United States | Main | From Our Archive: Student Debt in Perspective »

Do Currency Forwards Say Anything about the Future Value of the U.S. Dollar?

Currency forwards do include useful information about the future value of the U.S. dollar, but any messages are hard to decipher without tools. Just as the yield curve reflects expected short rates as well as term premiums, foreign exchange forwards embed not only anticipated depreciation but also premiums for currency risk. This complicates life for both central bankers, who routinely tease information from asset prices, and portfolio managers, who need to estimate expected returns and beat benchmarks. Most analyses of market quotes suggest that forwards as well as interest rate differentials largely comprise noise rather than information about anticipated currency returns. However, drawing on my recent staff report, a new method, analogous to common arbitrage-free term structure models and based solely on observable prices, suggests that forwards provide lucid clues about the expected path of the U.S. dollar.

The Interest Rate Parity Puzzle
Before discussing the results, let’s briefly review some theory and evidence. The market for foreign exchange is arguably the world’s deepest and most liquid, and no one eats a free lunch. For example, investors should not be able to borrow one unit of local currency at the domestic interest rate, convert the funds to foreign currency at the spot exchange rate, deposit the proceeds in a foreign-interest-rate-bearing account, and expect to convert the foreign-dominated funds at the forward exchange rate at expiry for a profit (over the cost of the domestic-denominated loan). Doing so would constitute an arbitrage, defined as a riskless and profitable trade that costs nothing upfront.

Even so, there is a substantial debate about whether so-called uncovered or even covered interest rate parity holds. Standard econometric tests evaluate whether, over both long and short horizons, forward discount quotes or interest rate differentials predict realized depreciation rates. A pithy synopsis of this gargantuan literature is impossible, but the vast majority of studies that use only market data finds no support for this hypothesis and often uncovers a puzzle—currencies for countries with higher bond yields tend to appreciate rather than depreciate. Also, forward discount quotes bear scant resemblance to realized depreciation rates, which implies either that premiums dwarf forward prices or that investors’ forecasts have been persistently wrong. Some studies that mix survey and market data imply that forwards more closely map to expectations, but this approach is arguably less relevant for market participants who, after all, constantly monitor tradable instruments to earn a living.

A New Approach: Continuous-Time, Arbitrage-Free Models
So, are market data worth yet another look? The answer seems to be yes, as there’s another way outlined in my staff report, using only ex ante quotes, to gauge investors’ expectations for currency appreciation as well as the required premium for exchange rate risk. Broadly analogous to continuous-time, arbitrage-free models of risk-free bonds, the method stipulates that a forward contract is a function of the instantaneous depreciation rate (or in practice, three to four latent factors that follow a mean-reverting random process), which in turn over an instant conforms with interest rate parity to preclude arbitrage.

These assumptions lead to a partial differential equation for the price of a forward contract—not too dissimilar to the derivation of, say, the Black-Scholes equation or the Vasicek model for bonds. The equation is solvable as long as forward prices are linear functions of the underlying factors of the model. Also, even though the derivation precludes arbitrage, given time-varying market prices of risk, the model is flexible enough to disentangle premiums and expected depreciation. The premium is the spread between the model-implied forward and anticipated depreciation, and it is a function of the perceived quantity and price of risk. This formulation is very similar to how arbitrage-free affine models of the yield curve recover the term premium, defined as the difference between the model-implied yield and the sum of anticipated short rates.

Some Empirical Results
Enough math and theory for now—what happens when the model meets some data? Given forward discount term structures for up to eleven U.S. dollar currency pairs from the mid-to-late 1990s through early 2014, three pressing questions are: Does the model fit observed prices? Does it produce premiums? And do those premiums vary (and how)? The answers in brief are yes, yes, and yes (but not necessarily in the way standard approaches suggest).

Some examples may be illustrative. Consider the term structure of expected depreciation from forward discount quotes on the $/£ currency pair from three months to two years ahead on March 18, 2014, noted below. The yellow diamonds denote raw forward discount quotes, and the solid black line is the model-implied forward rate, which, to address the first question, indeed seems to fit market prices closely. Also, with respect to the second and third questions, consider the model-implied annualized depreciation rate (the blue line) and the premium (the red line). At the two-year point, the model implies almost a 60-basis-point annualized appreciation (that is, negative depreciation), whereas the raw forward quotes suggest about a 40-basis-point “return” on the currency position. What does this difference mean? Investors expect the U.S. dollar to appreciate, but the model-implied forwards also indicate that they demand about a 20-basis-point premium through the two-year horizon to hold U.S. dollar- relative to British pound-denominated assets. Finally, the red line suggests that the premium varies, with increases further out the horizon. 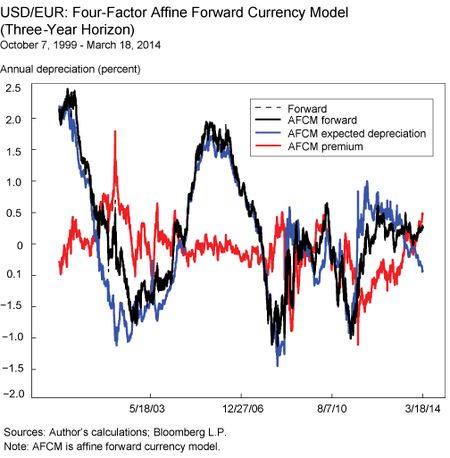 The model clearly fits these data well, as the dashed and solid black lines are visually indistinguishable. Also, anticipated depreciation accounts for a significant portion of the forward discount most of the time, but not always. For example, toward the end of the sample, and perhaps notably coinciding with an improvement in sentiment regarding “peripheral” European sovereign debt, the path of the red line suggests a relative ease in investors’ demand for a premium to hold the euro as opposed to the U.S. dollar (as indicated by the increase in the red line). Not every gyration follows intuition, which is undesirable anyway for investors who need trading signals. The most recent term structure, shown below, suggests perhaps surprisingly to some that beginning in six months investors demand compensation to hold the U.S. dollar, not the euro. Also, raw forwards beyond two years suggest modest dollar depreciation, but the model actually implies a small anticipated appreciation, which is again offset by the required premium to hold the U.S. dollar at longer horizons. 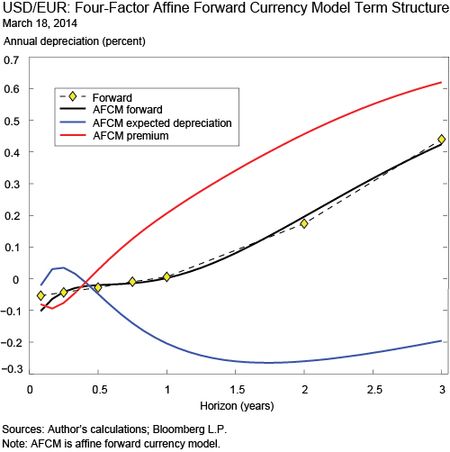 Besides these examples, my staff report details a very close fit for eleven U.S. dollar pairs over the full sample at each horizon. The evidence also suggests that the premiums, although generally nonzero, hardly blunt anticipated depreciation signals. Also, in contrast to what academic studies of ex ante and ex post quotes find (for example, Fama 1984), premiums do not vary significantly more than, or necessarily correlate negatively with, anticipated depreciation.

Uses and Caveats
This method may have three practical uses. First, the model fits the data closely, but not perfectly, so the results strictly speaking identify trading opportunities, not unlike arbitrage-free term structure models. Second, and also similar to continuous-time models of bonds, estimated exchange rate premiums, both across currencies and along individual term structures, convey where investors get paid the most to take risks. Third, estimates of market expected returns are critical for portfolio optimization. For example, under the Black-Litterman method, expected returns are a weighted-average of consensus expectations and an investor’s active views on returns, where the former are typically backed out from market capitalization weights using “reverse optimization.” In short, this approach more directly assesses market expectations.

There are, of course, caveats. To begin, the model is derived and estimated on a bilateral basis and thereby does not preclude arbitrage opportunities for currency crosses (say, U.S. dollar to yen, yen to euro, and euro back to U.S. dollar). Also, the method uses no information from the relevant term structures; there is much to learn about which observable variables affect required compensation for risk; and the underlying factors might not be mean-reverting. But meanwhile, considering the motivations, forwards may merit renewed scrutiny from investors and central bankers alike.

J. Benson Durham is an assistant vice president in the Federal Reserve Bank of New York’s Markets Group.
Posted by Blog Author at 07:00:00 AM in Exchange Rates, Expectations, Financial Markets