« Inflation in the Great Recession and New Keynesian Models | Main | Just Released: Looking under the Hood of the Subprime Auto Lending Market »

This raises the question of what determines the expected reversion of marginal costs. In our paper “Inflation in the Great Recession and New Keynesian Models,” we show that if the prices of individual goods are sufficiently sticky, then monetary policy can have substantial effects on future marginal costs and therefore on inflation. Specifically, if the central bank is committed to stabilize inflation around its target, then it will lower its policy rate and indicate that it will maintain it at a low level for an extended period of time when output is below potential. This announcement tends to lower longer-term rates, which stimulates consumption and investment demand, and in turn raises expectations of future marginal costs. 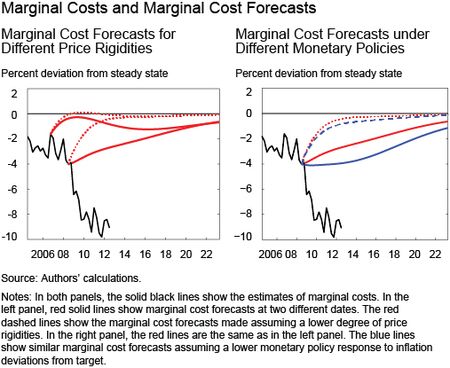 It has been argued that it is harder for central banks to affect inflation when inflation is unresponsive to current slack, that is, when the Phillips curve is flat. For instance the 2013 IMF World Economic Outlook asks, “Does Inflation Targeting Still Make Sense with a Flatter Phillips Curve?” Seen from the perspective of our model, a flatter Phillips curve does not imply that monetary policy control is diminished. On the contrary, by affecting future marginal costs, monetary policy can effectively anchor inflation expectations, which is why, in our story, inflation did not fall in the Great Recession.

At the time this post was written, Raiden B. Hasegawa was a senior research analyst in the Research and Statistics Group.

The point of these two posts is to test a theory of aggregate inflation determination and to show that this theory performs reasonably well. We are well aware of the large literature on the determination of individual prices, both at the firm level and item level. The challenge has been to relate individual price adjustments to the evolution of aggregate prices: knowing a lot about how widget prices are set is unfortunately not always informative for aggregate inflation, which is what we care about in these posts.

Our two posts perform a very concrete exercise: they document the outcome of a forecasting exercise for inflation and output growth. We show that as of 2008, the model did predict fairly accurately the subsequent behavior of these variables. This suggests that the model provides some value to understanding what is happening in this important area.

It's important to point out, in response to Tim Young's post, that the Fed is not funded by taxpayers.

In fact, the Fed earns money, which it then gives to the US Treasury.

I followed the link across from FT Alphaville to what seemed like a promising article and was disappointed. To cut through the academic gobbledegook, all you seem to be saying is that, you have demonstrated, via a mathematical model, that if prices are difficult to move, and if the central bank is expected to be ensure that prices will be rising at its inflation target in the not-too-distant future, it is not worth going to the trouble of cutting prices now. I am sorry to be rude, but without some fieldwork gathering some evidence that this is actually how business reached its price-setting decisions, this seems to me like mere internal hypothesising, which with all due respect to the authors, is probably little informed by practical experience of how business works. I can see why the key involvement of public faith in the Fed’s ability to meet its inflation objective in this thinking goes down well at the Fed though. If I were a US taxpayer, I would wonder why I am paying for such detached theorising to be done in what must be some of the most expensive real estate in the US.

right, by the other side of the coin is that in your model agents must have been expecting output gaps to close quickly! ah!