This post is the third in a series of four Liberty Street Economics posts examining the value
of a college degree
. 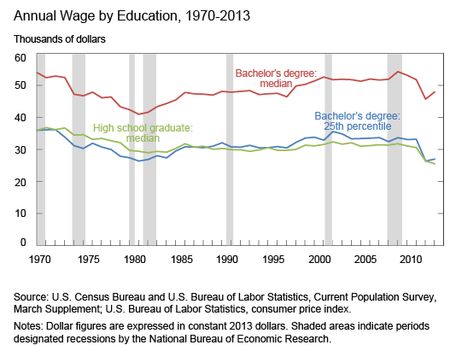 One more thought – I was trying to think of a good way to actually calculate the value of a college degree. The best thing I came up with is to look at any big state school that bases decisions on a numeric formula (using SAT scores and GPA) and then look at people who only apply to that school and who are just above and below the cutoff (regression discontinuity design). http://en.wikipedia.org/wiki/Regression_discontinuity_design Of course, that requires a longitudinal design where each individual student (or non-student) is tracked for years. Additionally, it would probably be important to look for at least 10-15 years after graduation time. (A student right out of school might make less than someone who has worked for 4 years, but they might rise up much faster and higher than a high school grad.)

This is very faulty logic. Just because the worst 25% of college grads do no better than high school grads doesn’t mean they wouldn’t do even worse if they had not gone to college. We have no idea from this how much worse they would have done. You acknowledge this, but mentioning this as a potential caveat is not enough here. Another problem is that higher degree earners make even more money, and those people are also earned Bachelor’s degrees but it looks like they aren’t being included in that group’s median. The bottom quartile of *high school grads* are probably doing very badly right now. (Of course, people who chose to go to college are inherently different than people who didn’t.) Also, even if the only improvement is by $2k/year (for women), that makes college more than worth it for the average person! The median cost of college including financial aid for a public four year university is around $3k/year. That means $12k for a four year degree. A woman graduating from college at 21 would make that difference back by age 27. http://nyti.ms/1oNwFlr In fact, for $12k to not be worth it, the difference over 20 years would have to be $600 or less (ignoring interest for simplicity)! Furthermore, the fact that a public diploma costs even $3k is due to reduced subsidies from government. Arguments like this should make college more expensive and for the wealthy as they cast doubt on its worth.

The other side of the equation, the cost of the education, also affect the payoff. Here’s an interesting site: UPenn’s historical cost of attendance http://www.archives.upenn.edu/histy/features/tuition/1980.html. Bottom line is that tuition costs have risen by a factor of 6 since 1981. Wages about 2.2x.