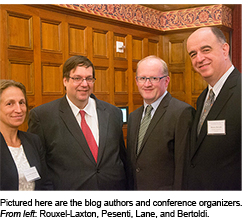 All these questions were raised and discussed at the recent Macroeconomic Policy Mix in the Transatlantic Economy workshop, jointly organized by the Center for Economic Policy Research, the European Commission, and the Federal Reserve Bank of New York. The topics covered included secular stagnation, the output effects of fiscal consolidation, cross-border banking as a source and propagator of financial shocks, and the asset-market effects of unconventional monetary policies. In what follows, we provide a summary of the workshop’s discussion of these issues.

Participants agreed that macroeconomic policy responses on both sides moved in the same direction in the first phase of the global financial crisis and were effective in avoiding a repetition of the Great Depression. The bifurcation took place in 2011 when the euro area, having failed to address early on its banking problems and confronted with the sovereign debt crisis, was caught in a negative feedback loop between bank credit risk and sovereign credit risk. The emergency measures that were adopted avoided the worst but resulted in pro-cyclical fiscal consolidation. Together with a credit crunch in a number of euro area countries, this led to a strong decline in demand in general and investment spending in particular. In the same period, the United States had to face challenges that also made its policy mix far from optimal, such as the abrupt fiscal consolidation in early 2013. Still, its macroeconomic stance was much less pro-cyclical and, helped by a healthier banking and financial sector, the U. S. economy was able to stage a meaningful recovery and approach the point where monetary normalization could start.

Some participants considered that the main factor behind the different performances of the United States and the euro area was the reluctance to tackle decisively the euro  area banking problems at the beginning of the crisis. This failure gave rise to the negative feedback loop between banks and sovereigns that was the root cause of the double-dip recession in the euro area. Other participants, while agreeing that the euro area banking problems affected the policy sequence during the sovereign debt crisis, pointed out that the latter was significantly worsened by the excessively restrictive fiscal stance and the insufficient monetary accommodation, in particular in the 2011-12 period. The observation that credit problems in the euro area emerged only in 2012 helped support this view. Until that moment, credit growth had been stronger in the euro area than in the United States.

Looking forward, some conference participants deemed the euro area to be more at risk of facing secular stagnation than the United States. The euro area has excess saving, as indicated by its large current account surplus, depressed domestic demand, unfavorable demographics, very low productivity growth, and interest rates stuck at the zero lower bound. However, others argued that secular stagnation is not inevitable and suggested, in particular, that repairing euro area bank balance sheets would be a step in the right direction. The asset quality review and the stress tests currently undertaken were considered pivotal in this respect.

Participants also noted that Draghi, in his keynote speech at Jackson Hole, identified three processes to restore growth in the euro area, namely: delivery of structural reforms (both at national and euro area levels) to boost potential growth; further monetary policy accommodation (possibly including the introduction of quantitative easing and broader outright purchases), whose positive effects would be felt through a currency depreciation and the provision of an insurance against deflationary risks; and coordination of national fiscal stances to achieve a more growth-friendly overall stance for the euro area and to launch an ambitious investment program to support growth. Participants considered that such an array of measures would provide the best insurance compact against the risk of secular stagnation in the euro area.

In discussing cross-border banking, participants noted that the ways that financial conditions were buffeted by winds generated abroad reinforced the importance of governments having financial tools to cope with international shocks. Both ex-ante measures and ex-post policies—the use of swap lines, the introduction of liquidity requirements, and, more generally, the implementation of Basel III reforms—were seen as important mechanisms to moderate the effects of a large global liquidity event, in addition to the more conventional lender-of-last-resort actions.

In terms of transatlantic policy cooperation, participants highlighted three potential dimensions: trade liberalization, including the successful completion of the Transatlantic Trade and Investment Partnership, which would help raise productivity growth and lift living standards; regulatory policy convergence and mutual recognition in the financial sector; and internalization by central banks of each other’s actions and communication management so as to minimize negative spillovers. Some observed that, going forward, the likely asymmetries in exit strategies from the zero lower bound may lead to some challenges for monetary policy in the transatlantic economy, including (but not limited to) exchange rate developments.


Authors’ note: The views summarized in this post represent those of the conference speakers and not necessarily those of the institutions with which they are affiliated.

Moreno Bertoldi is head of the unit responsible for countries of the G-20, International Monetary Fund, and G-Groups at the Directorate General for Economic and Financial Affairs, European Commission.


Philip R. Lane is Whately Professor of Political Economy at Trinity College Dublin. He is also a research fellow of the Center for Economic Policy Research.

Paolo Pesenti is a vice president and monetary policy advisor in the Federal Reserve Bank of New York’s Research and Statistics Group.


Valérie Rouxel-Laxton is head of economic and financial affairs for the Delegation of the European Union to the United States.