Before the reforms, the clearing banks provided unlimited intraday credit
Before the recent reforms (this report describes the reforms, and this statement discusses what has been accomplished so far), all outstanding tri-party repo contracts were unwound at 8:30 a.m.—with cash returning to the lender and collateral to the dealer. The end-of-day settlement process was run at approximately 6 p.m., settling all outstanding and new contracts. Because dealers are highly levered, they required intraday liquidity between the maturation or “unwind” of tri-party repo contracts in the morning and the end-of-day settlement.

Tri-party repo contracts are settled on the books of the two clearing banks—JPMorgan Chase and Bank of New York Mellon. The clearing banks provided unlimited intraday credit to dealers to enable the “unwind” on a discretionary basis. Given the very sizable securities positions that the larger dealers financed using tri-party repo, the clearing banks extended enormous amounts of intraday credit, both in terms of absolute dollars and relative to their respective capital bases. Such actions raised the risk that a clearing bank would not be able to absorb the impact of a failing dealer and so would itself be destabilized, leading to the interruption of a number of financial services provided to other clients (with potentially disastrous results). Furthermore, the discretionary nature of the credit provisions meant that a clearing bank could restrict or eliminate intraday credit, especially during times of financial market stress, which could impair market functioning and confidence.


The tri-party repo reforms have affected the amount and source of intraday liquidity
The Tri-Party Repo Infrastructure Task Force (“Task Force”)—an industry group sponsored by the New York Fed that was formed in 2009 and issued its final report in 2012—worked to address this financial stability risk by proposing a roadmap for reform. One goal was to sharply reduce the amount of intraday liquidity needed to facilitate settlement. To that end, the roadmap called for changing the settlement process so as to end the “unwind” for non-maturing trades and allowing trades to roll without a need for intraday credit. Further, the “unwind” was moved to 3:30 p.m., with the end-of-day settlement process kicked off shortly thereafter. 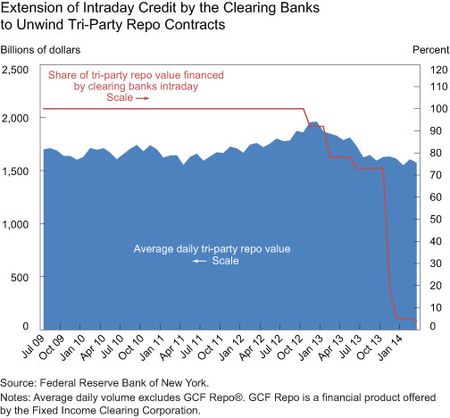 An essential element of the Task Force’s roadmap was the requirement that the intraday credit the clearing banks choose to provide to dealers be on a capped and committed basis. The size and terms of each dealer’s credit line would be negotiated between the dealer and the clearing bank, subject to a cap of no more than 10 percent of a dealer's total tri-party repo book. Initial indications from market participants suggest that these lines may currently be below the 10 percent threshold.

At the end of 2014, the two clearing banks will be operating their respective tri-party settlement processes with only capped and committed intraday credit.* (JPMorgan Chase transitioned to capped and committed credit in March 2014. Both clearing banks are working to implement these reforms with regard to the settlement of GCF Repo® contracts—see this Federal Reserve Bank of New York staff report for more detail.) In addition to committed credit provided by the clearing banks, dealers may source intraday credit from an affiliated company, or from a third party. Using the available sources of intraday credit, dealers will need to ensure that they can provide enough liquidity to fund their maturing obligations by 3:30 p.m. If a dealer is sourcing this funding outside its clearing bank, it will be expected to pay back its liquidity provider upon the completion of the tri-party repo settlement window at 5:15 p.m. and all funds must be repaid prior to the close of the Fedwire® Funds Service at 6 p.m. (Fedwire Funds is the main wholesale cash-payment settlement system used by financial institutions.)

To see this point, consider the following example. Suppose a dealer has a maturing tri-party repo contract of $10 million with investor A, as well as a new tri-party repo contract of $10 million with investor B, where similar securities are accepted as collateral for both repos. Additionally, suppose the dealer is sourcing liquidity from a third party (not the clearing bank) and must pay back the third party prior to the close of Fedwire Funds. Under this scenario, the clearing bank will be able to unwind the maturing repo with investor A and settle the new repo with investor B within the settlement window, if the dealer funds the principal payment to investor A at 3:30 p.m. and investor B remits its cash payment to the clearing bank within the settlement window. Once the two transactions are completed, the dealer can use investor B’s funds to repay its third-party liquidity provider. However, if investor B’s funding does not arrive within the settlement window, the new trade will delay the settlement process beyond 5:15 p.m. This delay will have a knock-on effect on the dealer’s ability to pay its third-party liquidity provider before the close of Fedwire Funds at 6 p.m.

The late arrival of investors’ incoming cash will disrupt and delay the settlement schedule of tri-party repo contracts. Settlement delays increase the risk of fails, and can create disruptions for a broader set of late-day payments activities in which the clearing banks are involved. Given the importance of tri-party repo as a source of funding for dealers and an investment tool for investors, market participants should work toward ensuring the earlier arrival of investors’ incoming cash payments. 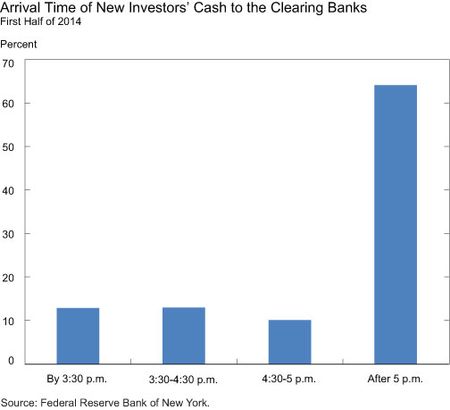 *The Bank of New York Mellon recently announced that it will operate its tri-party repo settlement process with only capped and committed intraday credit by the end of the first quarter of 2015, instead of at the end of 2014.