Correction: Earlier, we inadvertently posted the content of the second post in this two-part series under today’s headline. We have updated the blog with the correct content and will post part two on November 12. We apologize for the error.

It’s well known that the Great Recession led to a massive reduction in state government revenues, in spite of the federal government’s attempt to ease budget tightening through American Recovery and Reinvestment Act aid to states. School districts rely heavily on aid from higher levels of government for their funding, and, even with the federal stimulus, total aid to school districts declined sharply in the post-recession years. But the local school budget process gives local residents and school districts a powerful tool to influence school spending. In this post, we summarize our recent study in which we investigate how New York school districts reacted when state aid declined sharply following the recession.

Using regression analysis, we investigate how school districts reacted to steep declines in state aid per pupil in the post-recession period. The length and details of our district-level panel allow us to control for pre-recession trends, (observable and unobservable) fixed attributes of school districts, and a variety of observable time-varying school district characteristics.

We also investigate whether these patterns persist through the post-recession years or are driven by a single-year effect. The purpose of this analysis is to confirm that a relationship change actually occurred following the recession. To do so, we split the post-recession period into four separate years and observe the relationship between state and local revenue in each of these years (relative to the pre-recession relationship). The chart below shows the results. As before, the left bar in each panel shows the pre-recession relationship; each of the bars to the right shows the individual post-recession year effect. In every year, we see a weakening of the relationship relative to the pre-recession years, indicating that a persistent change did indeed occur. For local revenue per pupil, we see offsetting of $0.15, $0.23, $0.19, and $0.20 in the 2009-12 years, respectively, most of which seem to have come from property taxes. Specifically, for property tax revenue per pupil, the analogous figures are $0.12, $0.16, $0.14, and $0.15. 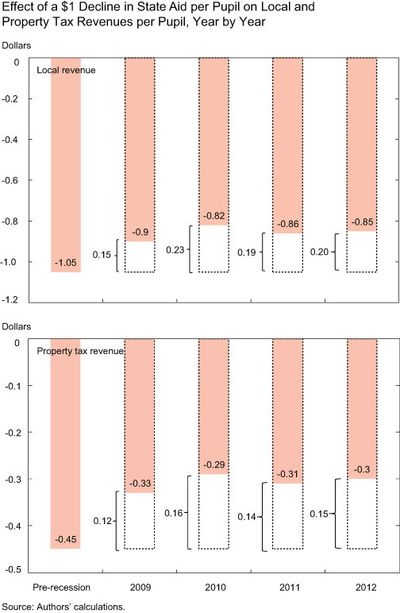 Our analysis uncovered some interesting patterns. We find that the relationship between state aid per pupil and local revenue (or property tax revenue) changed markedly with the Great Recession, as state aid to public schools declined sharply. Relative to the pre-recession period, a dollar decline in state aid per pupil resulted in a $0.14 increase in property tax revenue and $0.19 increase in local revenue. By allowing the effects of state aid to vary across years, we find that this pattern is not unique to a certain year, but is consistently reflected in each year after the recession. What this amounts to is robust evidence that state aid does affect local budget decision-making—a finding that has important policy implications. The state’s decisions about how much to spend on education during fiscal crises clearly has an effect on not just the state funding itself, but also on local revenue decisions.

Posted by Blog Author at 07:00:00 AM in Education, Regional Analysis

Thank you for your question. The largest school districts (Buffalo, New York City, Rochester, Syracuse, and Yonkers) do not fund schools directly from property tax revenue; instead the schools are funded as part of the city’s budget (of which property taxes are one component). Because of their different budgetary guidelines and processes, we exclude these five school districts from our analysis. Please see our paper (recently published) for more details: https://aefpweb.org/sites/default/files/edfp_a_00141.pdf The objective of the post is to understand how local funding in a representative school district in New York State responded to state aid changes following the Great Recession.

Thanks for this analysis.

My comment is a question:
Where is New York City in this data and these charts? Is it excluded? It has about 40% of NY State's students, so it would be 1 and 3/5ths of the quartiles.

If the quartiles are 25% of the 632 districts, reducing NYC (and other large districts) to only one data point, that would distort your results. Pls explain.