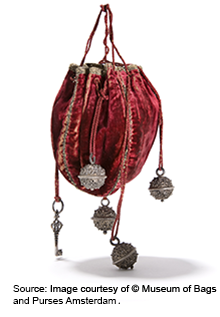 What about the real article? Money’s great and it’s nice to be able to carry it around. (Use of paper banknotes didn’t appear in Europe until 1661 in Sweden). As long as coins have existed, there has been the problem of how to carry them. The history of the pocketbook is an interesting one. An article posted on a Dutch handbag museum’s website explains that the need for a bag of some sort to carry coins arose in reaction to a general streamlining of women’s clothing. (Before that, coins and other items were carried in pockets within clothing.) The first such bag type, a precursor to the modern handbag, was sack-like and called a reticule. However, there were much earlier “pocketbooks.” In the past year, a discovery was made about what is believed to be the first known pocketbook, a metal shoulder bag from fourteenth century northern Iraq (see story and video commentary by the curator). The engravings on the bag depict a number of scenes, one of which is of a woman whose attendant is holding her shoulder bag. Would there have been coins in this metal bag? Yes, according to a story on a jewelry designer’s website:

Did fourteenth century women have items in their handbags that contemporary women would think strange? Ward says there probably wouldn’t be too much difference between a handbag’s contents then and now—a few gold coins, makeup, and personal items that the owner does not wish to display or carry.


Beautiful and old as that bag is, one item studded with dog teeth was found in Germany and believed to be a purse dating from between 2500 and 2200 B.C. Perhaps it is time to bring that design back (with plastic doggie-tooth substitutes)? No coins in that doggie bag.

A number of websites for handbags and other like articles have content devoted to the history of the handbag. This merchant summarizes the history from the eighteenth century to today. The Tassenmuseum (Museum of Bags and Purses) in Amsterdam has a timeline of bag styles starting pre-1600 to the present.

Many women have a habit of storing much too much change in their pocketbooks. According to an article in the Scranton Times-Tribune and another in Prevention, carrying a too-heavy bag is the source of many a backache. This health website recommends that people empty coins from their handbags every day! Reticule! An argument can be made also for making sure that your pocketbook is as heavy as possible. A 2012 blog post that deconstructs the concept of a woman’s handbag says:

Some women, whether defending their honor or their finances, have been known to use their handbag as a weapon—easy to swing, compressed enough to make a considerable impact on a head or body part. Any time I have to tote something heavy I like to say it doubles as a weapon in a barroom fight.


The grandmother of at least one writer of Historical Echoes let a potential mugger have it with her pocketbook back in the day.